Roller coasters are, by nature, extreme.

So it’s only natural that Kennywood Park has pushed the limits with its latest — the Steel Curtain.

This black-and-gold bad boy — its name a reference to the dominating defense of the Pittsburgh Steelers football team — is the serpentine steel centerpiece of a new area of the park called Steelers Country, a first-ever such collaboration between an amusement park and a professional sports team.

Like a hulking defensive lineman, the new coaster means to scare some people and toss them around. It opened to the public on July 13, 2019, after a July 12 media preview. The rest of Steelers Country opens later this summer. 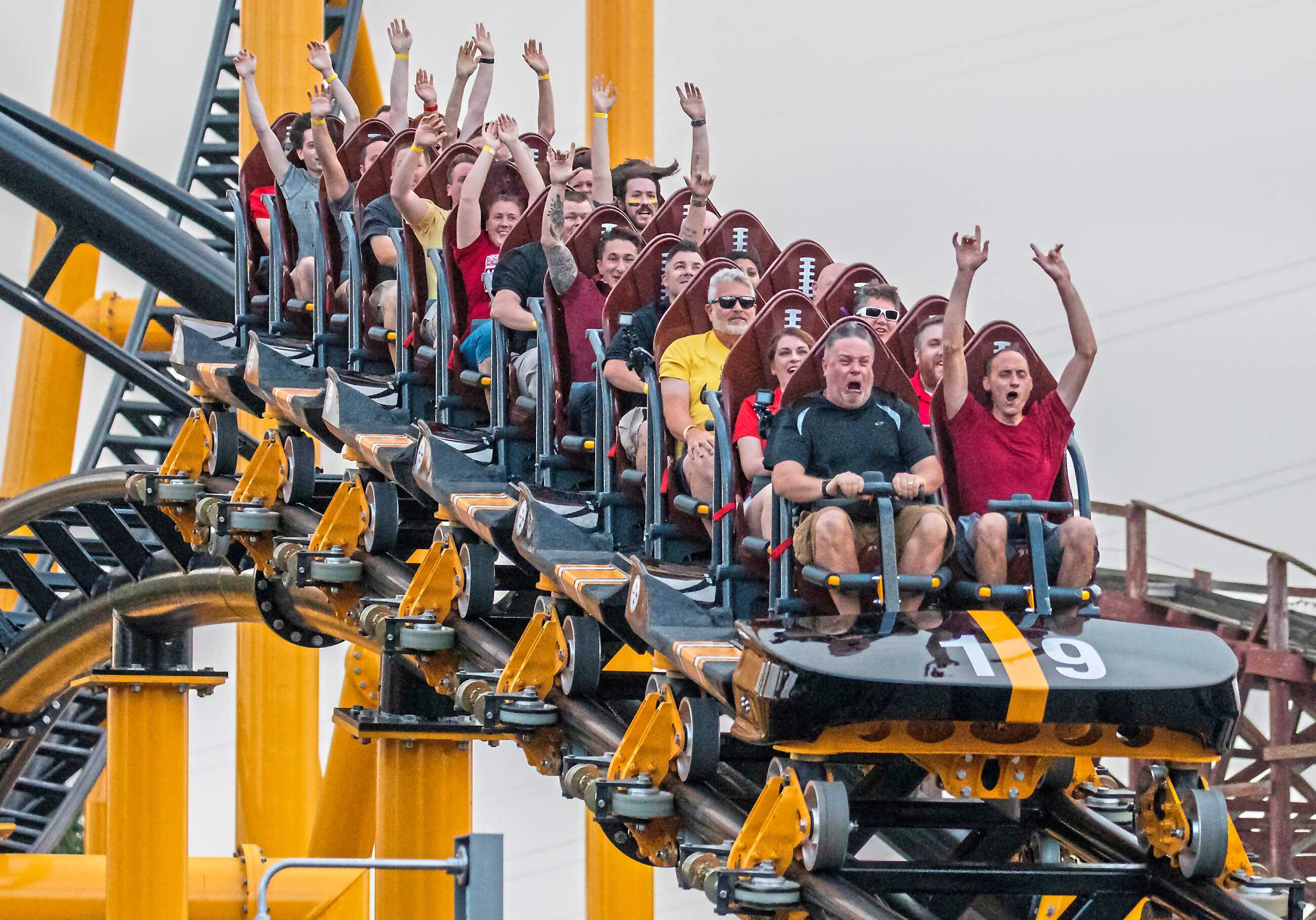 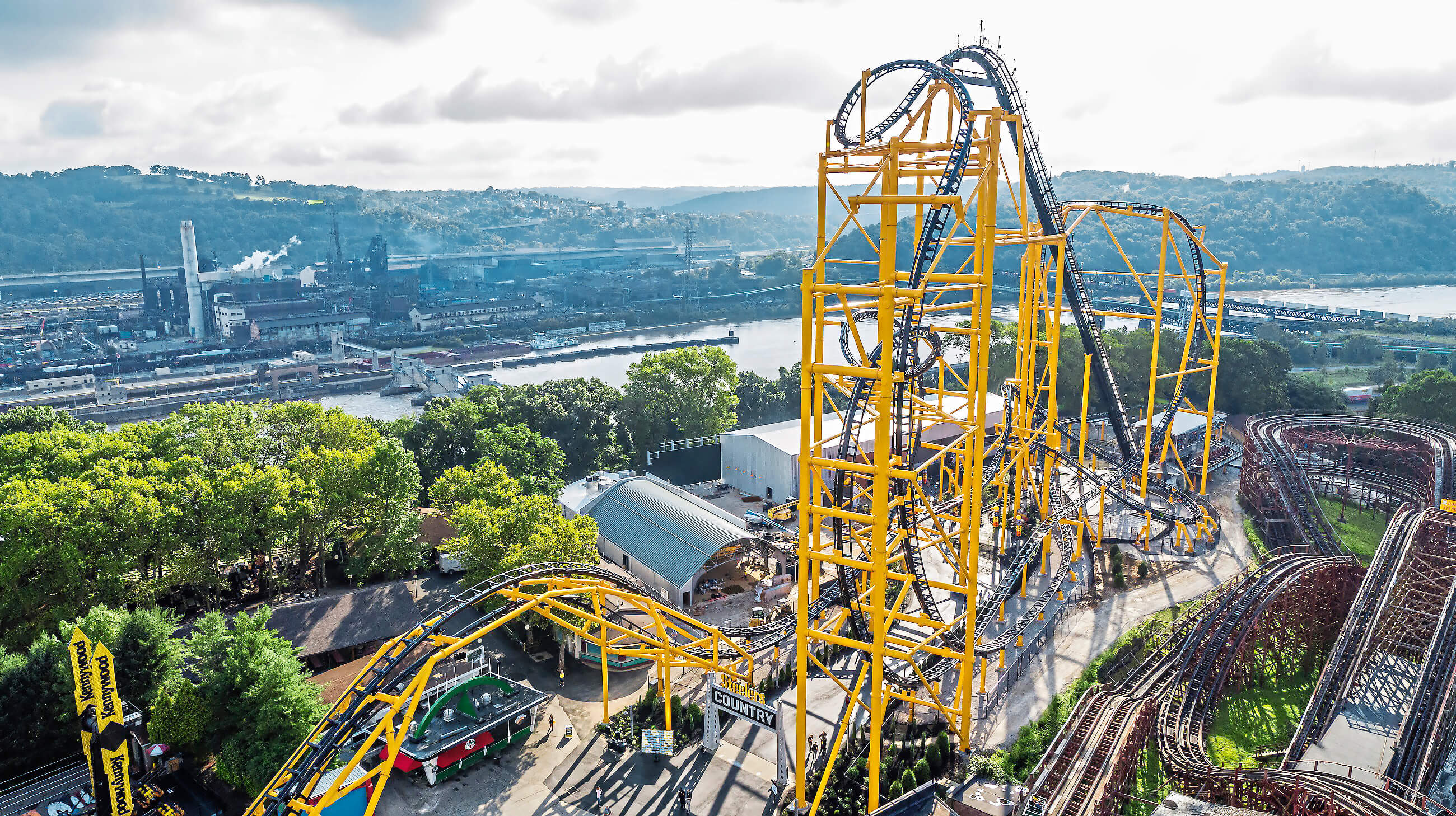 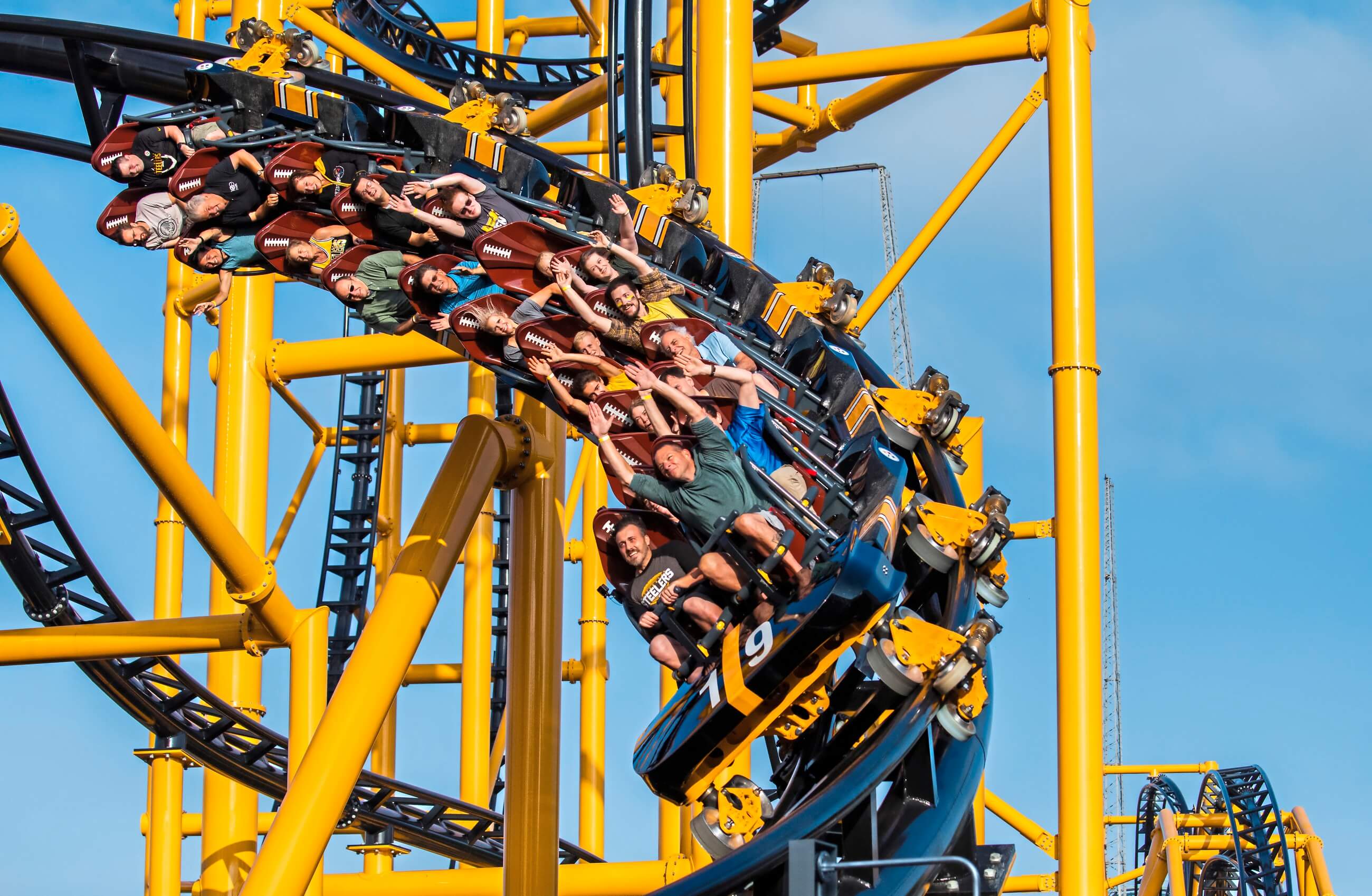 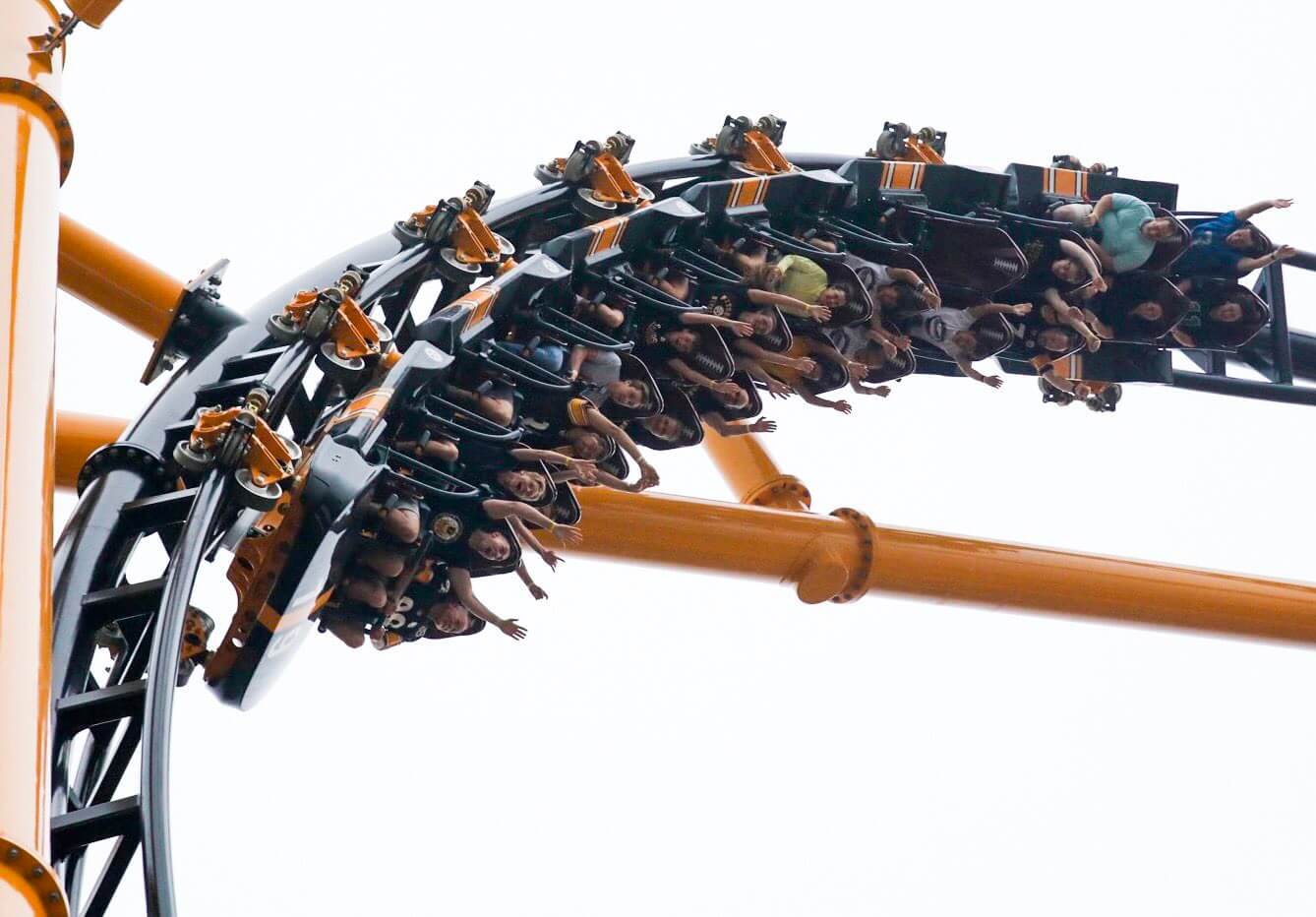 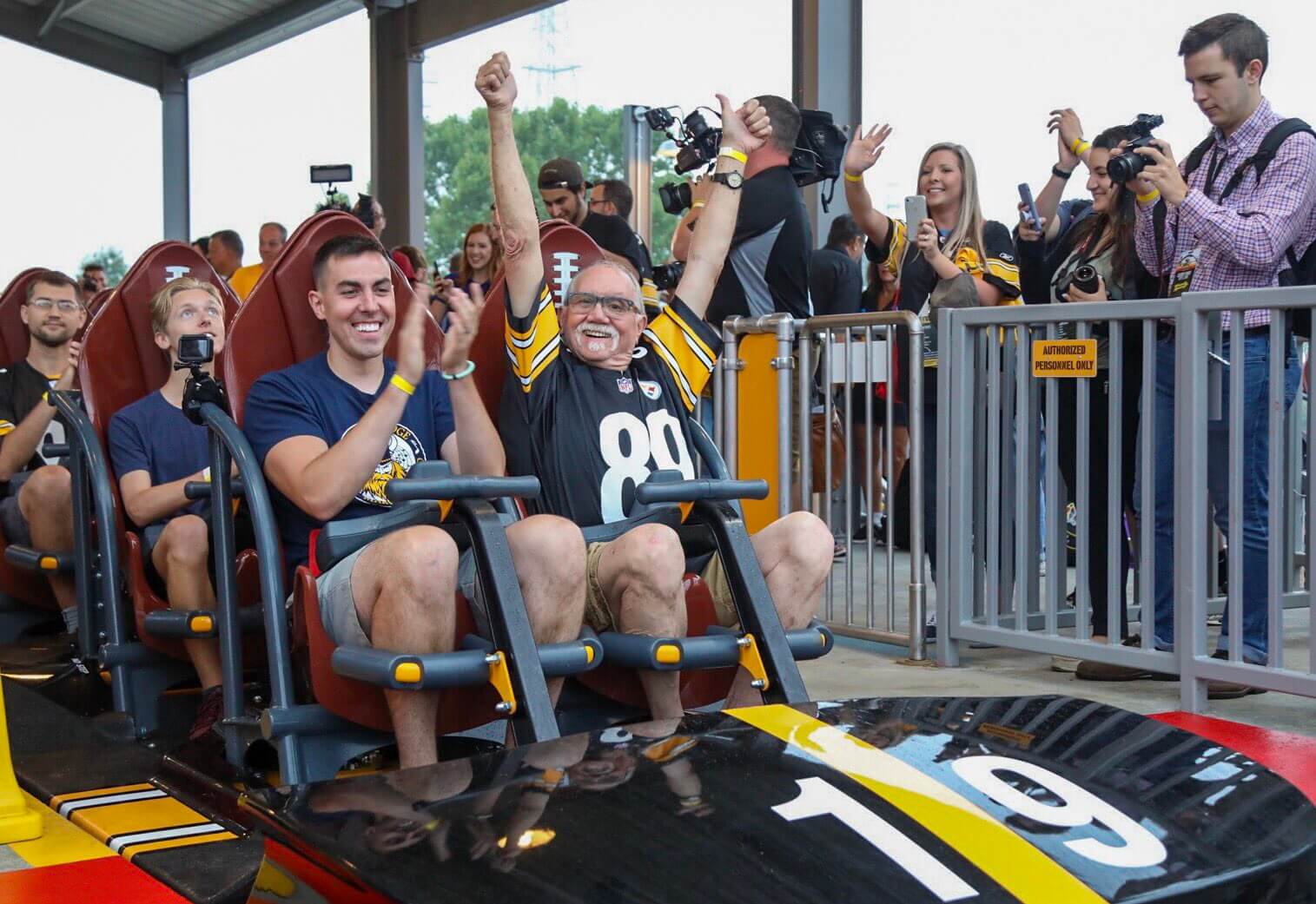 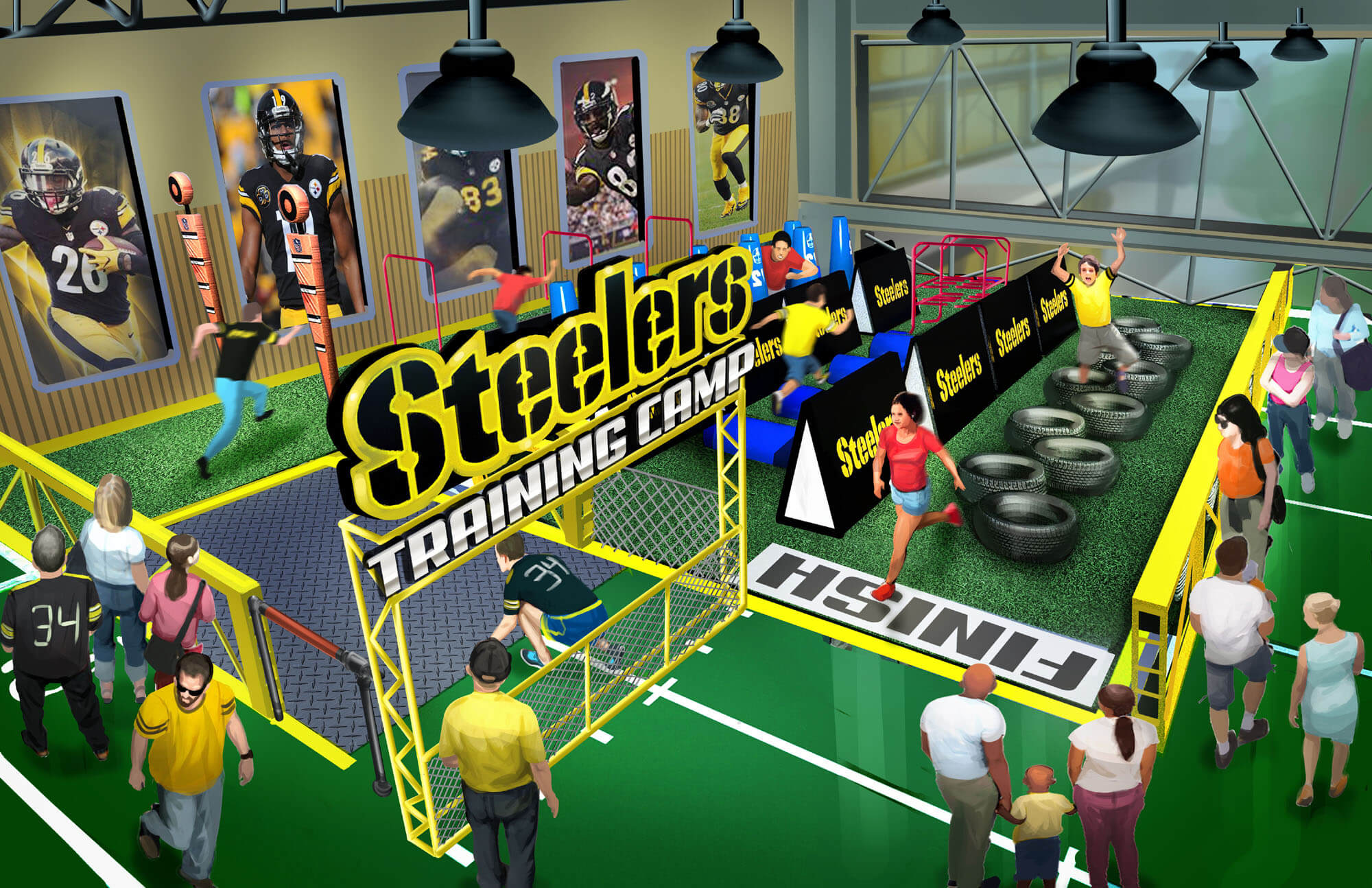 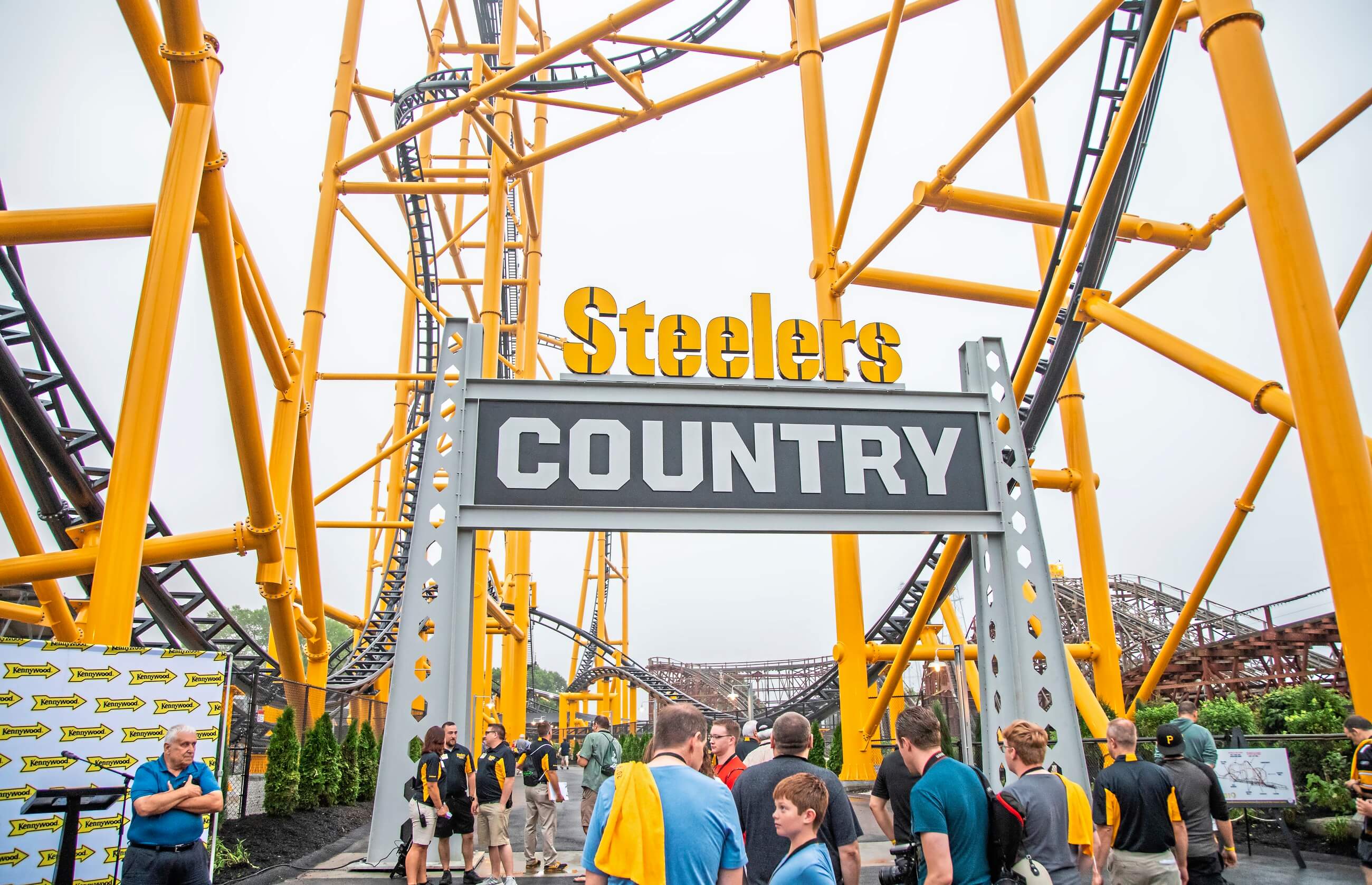 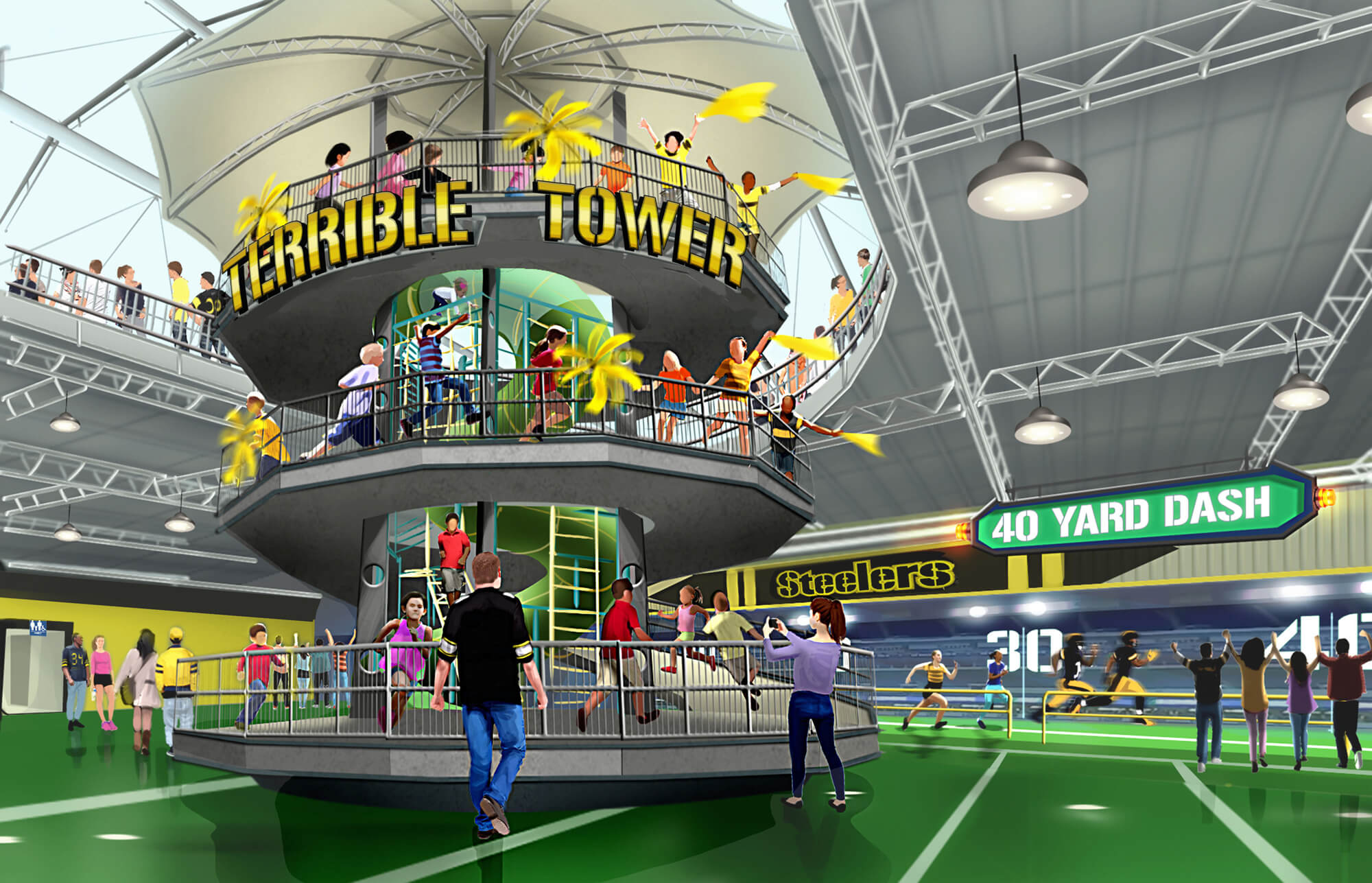 Turning records
on their heads

The Steel Curtain sets two other records — the most inversions on a North American coaster (nine) and the world’s tallest coaster inversion (197 feet).

We’ve known a new coaster has been on the way since July 2018. The West Mifflin amusement park kept “Project 412” — located where the Log Jammer used to be, in the northeast corner of the park — under wraps, and then teased the public for two months until officially announcing it. Kennywood kept updating the public, posting point-of-view animations of what the ride will be like and videos of test rides before announcing the public opening day.

Illegally fast
on most highways

The coaster was designed and built by S&S Worldwide Inc. The black-and-gold ride vehicles have laced football-shaped seats. The "19" and “33” on the front of the lead vehicle of each of two trains references 1933, when the Steelers franchise was founded. The restraints are only lap bars (no shoulder restraint) and lap belts. 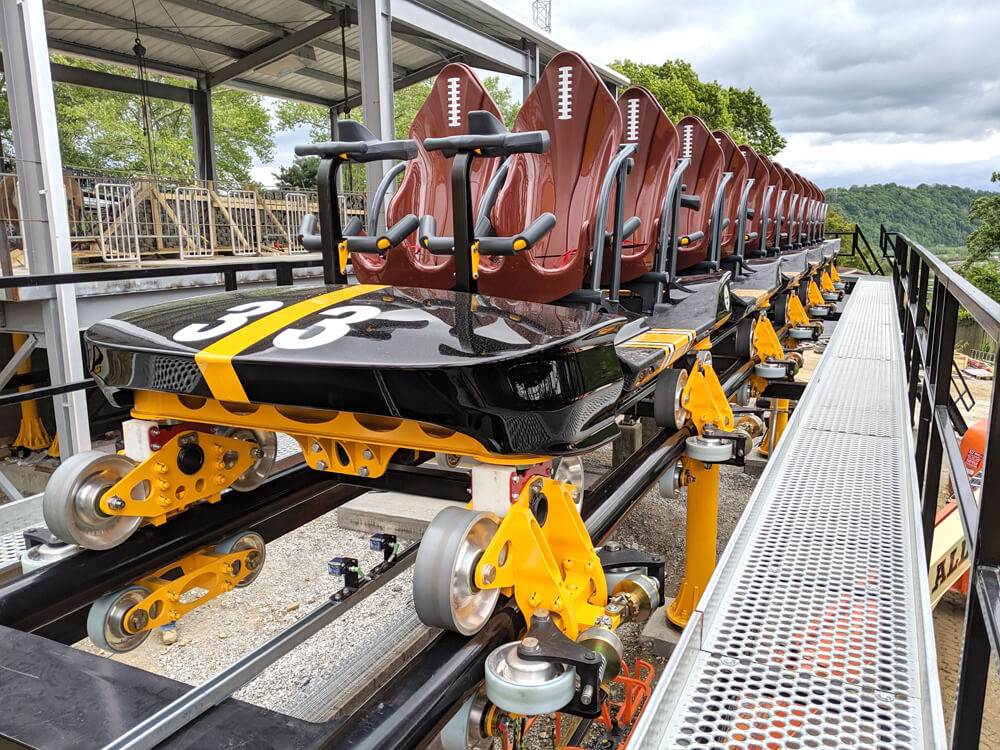 After the highest upside-down point, the cars make a drop of 205 feet. The zero-gravity “stall” make riders feel weightless by flipping them 180 degrees so they’re hanging upside down over the midway before flipping them in the other direction back up.

Who's the tallest
of them all?

Pennsylvania coasters aren’t nearly as big as Ohio’s, where Cedar Point’s Millennium Force and Top Thrill Dragster top out at 310 feet and 420 feet, respectively. But at 220 feet, Kennywood’s new coaster stands over the other extreme coasters in this state.

The ups and downs
and upside-downs

Kennywood has described the ride as a “two-minute adrenaline rush,” noting that with “several unique inversion elements, a top speed of 76 mph, and multiple airtime opportunities, this coaster promises to pack all the power of its namesake, the legendary defensive line of the four-time Super Bowl champion Pittsburgh Steelers of the 1970s!”

Steelers Country, the 3-acre area where the new coaster is set, includes the End Zone Cafe, built in the framework of one of the park’s vintage pavilions (this one once held the Whip ride). It will serve park visitors football tailgate-style fare with a twist — burgers stuffed with cheese and bacon, wings, pierogies — to eat inside or outside in the adjacent tailgating area. 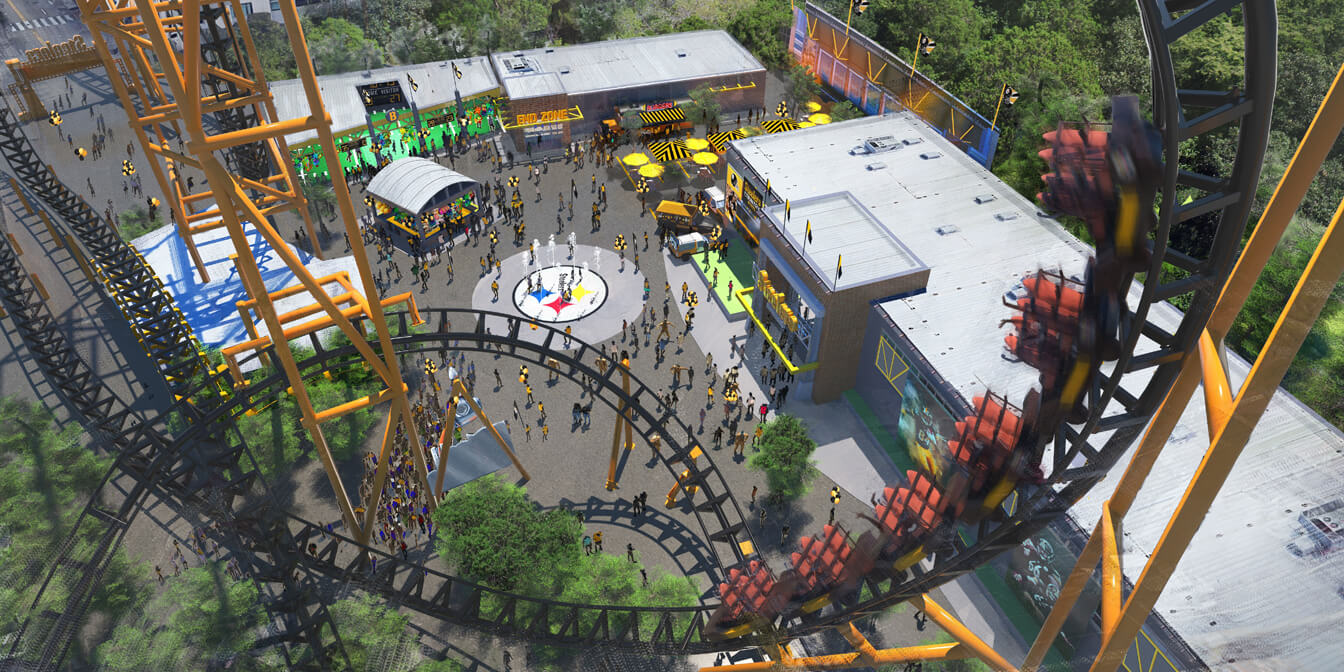 Next to that is the Steelers Experience, a metal building in which people can play and compete at football-themed games involving running, throwing footballs, tackling an obstacle course, even climbing a “Terrible Towel” structure and watching a Jumbotron.

But first they’ll have to make it through the gift shop, which is where the coaster will let them off. 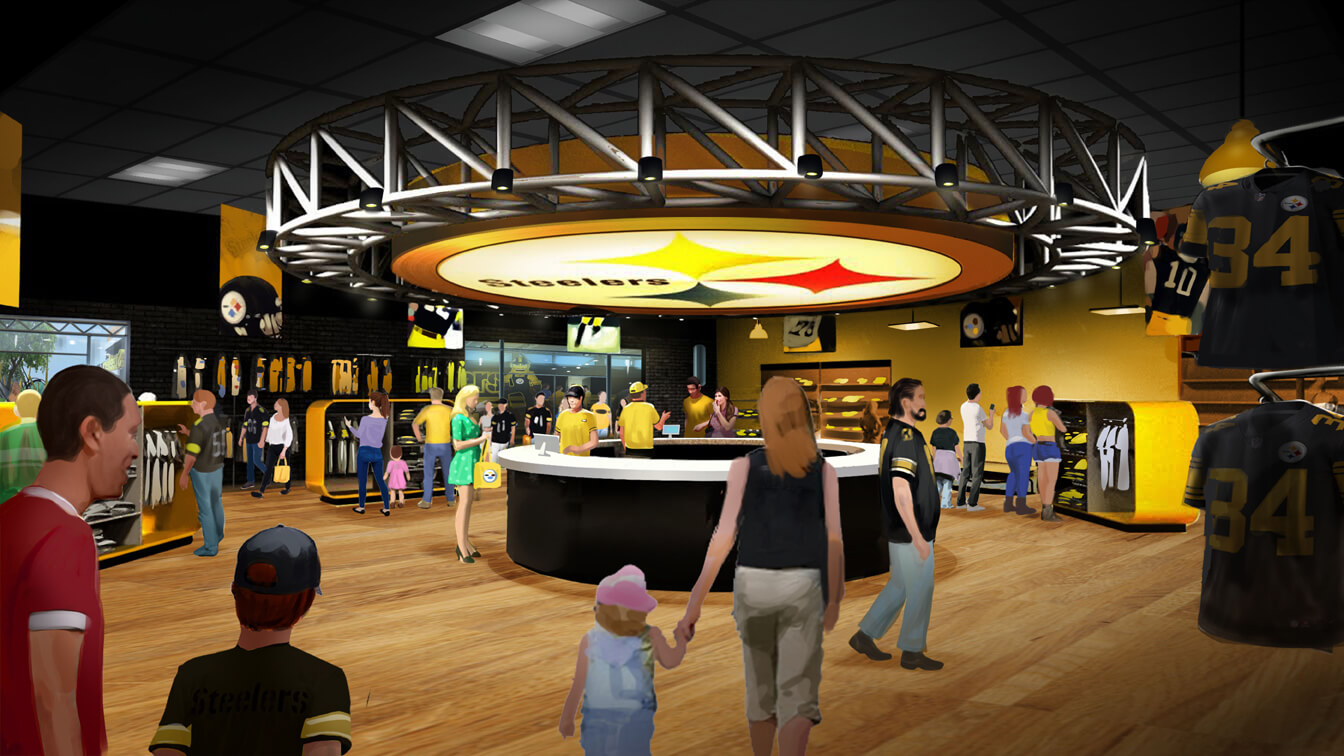