The Ku Klux Klan and a family photo album 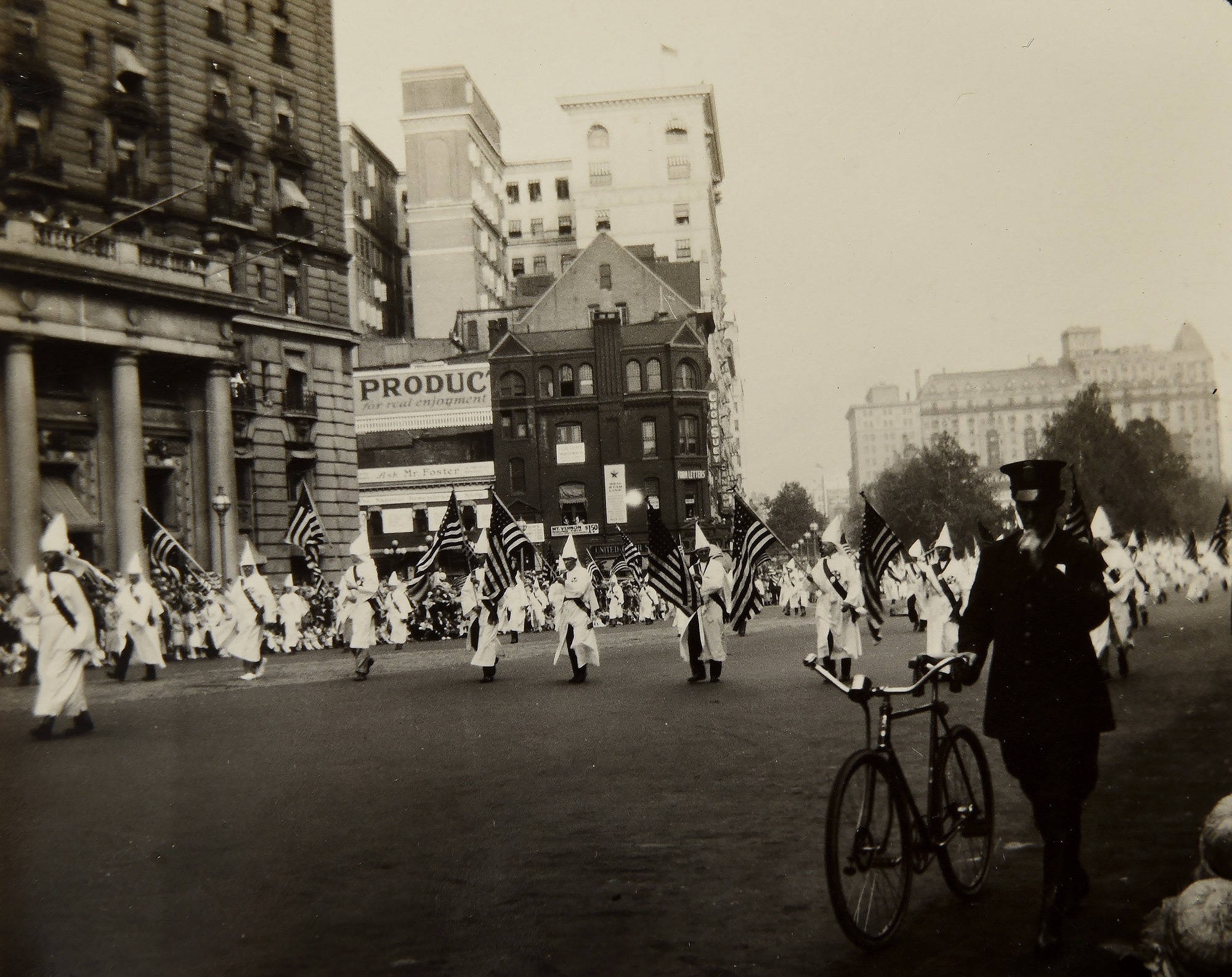 During a visit to his parent’s home in Bridgeville this past summer, Paul Ludwick sat in a living room and pulled open the worn cover of an overstuffed photo album. He hoped the pictures placed in the crinkled pages nine decades ago would answer a few questions about his grandparents, John and Clara Burnett, both of whom are long dead.

The images date to the 1920s and mostly document the Burnett’s travels. One photo shows Clara standing in front a ship called Baden-Baden. A sign offers tours for 25 cents. Clara, wearing a drop-waist skirt and a bell-shaped cloche hat, could have strolled from the pages of an F. Scott Fitzgerald story. John is sharply dressed in a suit. Sometimes tips his hat to the camera. He’s tall and slender and mostly bald except for faint wisps of hair clinging to the sides of his head.

Clara Burnett and the ship Baden-Baden.

Paul saw photographs of his grandparents smiling and posing next to waterfalls, scenic overlooks, monuments, the couple’s boxy black automobile. The pictures depict a time of charming simplicity and happiness, an era free of chaos and conflict.

The lie was revealed when Paul turned a page about halfway through the album. There, he found several pictures of men in white, sharply pointed hats and long white robes marching on a city street. Paul instantly recognized the costumes. These were members of the Ku Klux Klan, standing shoulder-to-shoulder, packing a wide street.  A close look at one picture reveals, in the distant background, the faint image of the nation’s Capitol. The klan is marching on Pennsylvania Avenue.

Paul was shocked. “What the heck are these doing in here?” he wondered.

Markings in the photo album indicate the pictures were taken in 1926. Paul conducted a quick internet search and learned that a klan march in Washington DC that year attracted 15,000 members. The year before, 30,000 attended.

The klan was then at the height of its powers and the 1925 march was front-page news. Pennsylvania’s contingent led the parade, the Pittsburgh Gazette Times reported. More than 2,0000 marchers traveled from Pittsburgh to take part.

Paul wondered,  Were my grandparents klan sympathizers? Or were they just observers, their attendance at the event simply a coincidental quirk of a trip to the east coast?

Paul does not remember his grandparents as racist or hateful. John in fact was kind and gentle and a wonderful gardener. He and Clara, a German immigrant, grew fruit trees in their yard. Grapes climbed the outside walls of the garage.

One memory stands out — Paul was four or five years old and ill with the flu or a cold. He was chilled. John, the caring grandfather, prepared a comfortable place for Paul on the porch of the couple’s home, so Paul could stay cool. This was in the late 1950s. It’s a memory that can make Paul misty eyed.

Other pictures in the album became potential clues. If John did sympathize with the klan, why would he pose in front of a statue of a Union hero at Gettysburg? In another picture, Clara and a few other women sit on a large rock. Written in chalk or paint on the rock is the word “Free” and for a moment this offered hope, but then a closer examination revealed the word “Camp” and so perhaps it means nothing.

Sharing a page with pictures of klansmen is a photo of a young African-American boy. He wears oversized clothes that appear to be held together by pins and he is either saluting the camera or shielding his eyes from the sun. Well-dressed white people walk past in the background. This picture was shot from a low angle, suggesting either John or Clara squatted or knelt to compose the frame. It’s one of the more creative and carefully constructed images in the collection.

Paul’s discovery caused him to reflect on our current era, our current conversations and conflicts. Torchlight marches and chants of the Nazi slogan “blood and soil” in the streets of Charlottesville, Va. Professional football players kneeling in protest, a president’s tweeted condemnation, the phrase “sons of bitches.” Constant outrage on cable news shows.

And it raised the question, “How will our grandchildren view us when, in coming decades, they leaf through the fragments of our lives? What will we say to them with our pictures and social media posts and emails?”

The klan marches on Pennsylvania Avenue.

The nation’s Capital can be seen in the background of this picture.

Paul is 63 years old. He grew up in Pittsburgh but left in 1981 and now lives in Omaha, where he works as a telecommunications executive and consultant. No matter his grandparents sympathies, he wants to leave a legacy that is his own.

He served for a dozen years on the board of public housing in Olathe, Kansas, and he’s proud of that contribution. “I never saw a person cheating the system or gaming the system,” he said. Residents “really just wanted a life like everybody else. I never voted to throw anyone out of public housing … I’m not a person that thinks, if you’re poor you brought it on yourself.”

He’s seen the images of NFL players taking a knee while the words of the National Anthem sound out. This protest of the manner in which police have treated people of color is “a noble thing,” he said.

Paul is hopeful that, in years to come, minority communities will experience more equality, a greater liberation. But it is not inevitable.

“It’s up to us,” Paul said. “I know history is going to judge us in the future.”