Protesting the 7 cent lunch and other uprisings at Gladstone 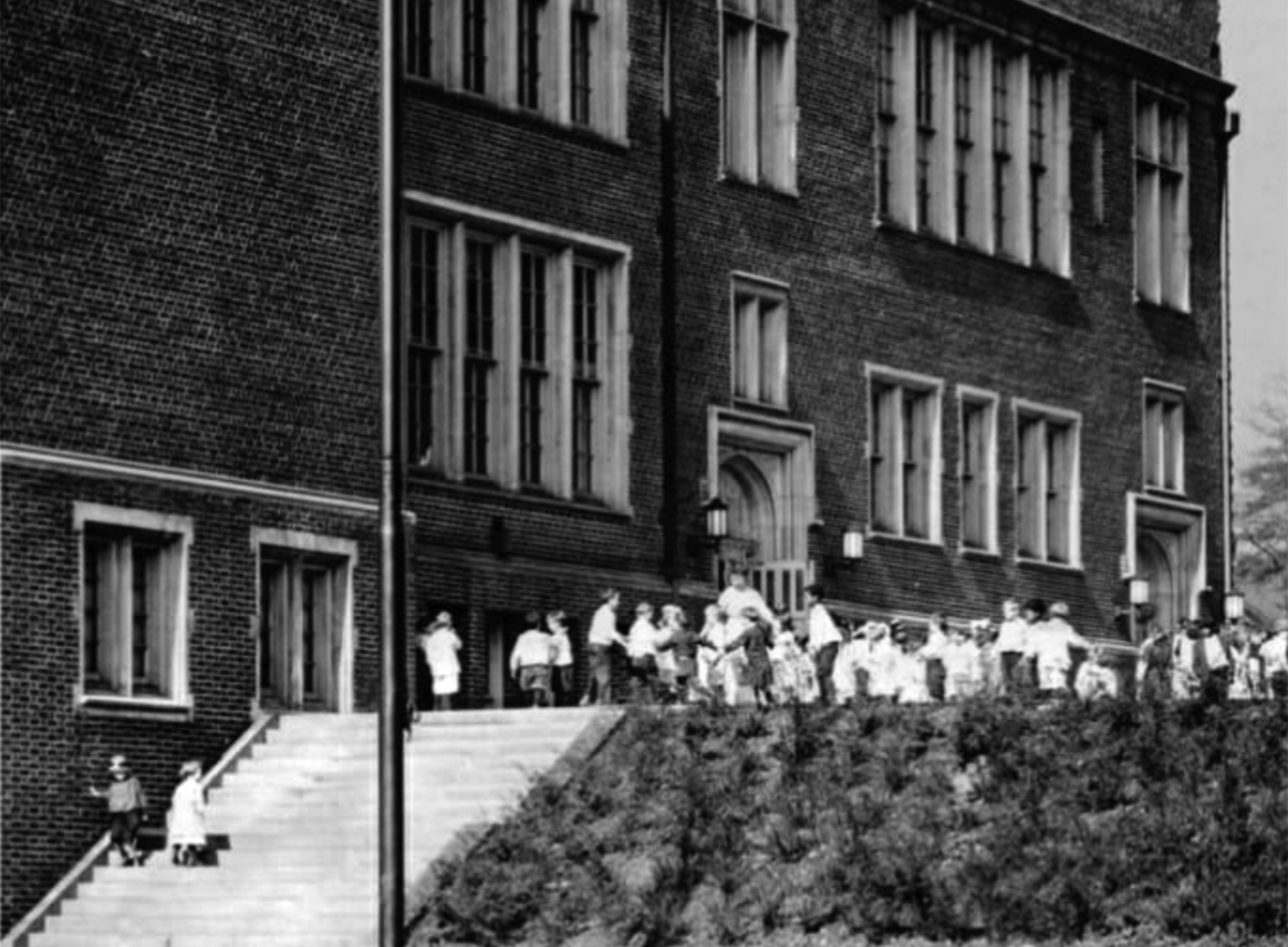 Gladstone as an elementary school, in a picture dated 1915. (Greater Hazelwood Historical Society)

The picture taken in 1915 depicts an idyllic scene — young children holding hands and gathered in a circle, a lone teacher standing tall among them. Looming in the background is the massive brick Gladstone School, then a newly opened facility for elementary students.

JaQuay Carter posted the picture a few months ago on the Facebook page he created for the Greater Hazelwood Historical Society. One suspects the photographer’s intent was to suggest a sense of order and optimism about the future of both the school and the community it served. But as years passed, the school changed. So did Hazelwood and the rest of the world. And while the scenes outside Gladstone’s doors often fell short of demonstrating peaceful happiness, they consistently reflected the mood and concerns of students growing up in an often turbulent steel town.

By 1947, Gladstone had been converted to a junior high school. In March of that year, police were called to quell what The Pittsburgh Press called a “near riot.” A group of students had gathered outside the school and were urging classmates to skip classes. Things got rowdy. A fight broke out. “Certain hoodlums were to blame,” the Press said.

One reporter approached the students in a futile effort to see what all the fuss was about. “Efforts to talk to the group around the school this morning were shouted down with jeers and catcalls,” the reporter wrote.

Newspapers the next day called it a “strike” involving about two-thirds of the school’s 700 students. Not all were willing participants. Groups of boys standing at school entrances threatened those heading to class, the PG reported. Some fearful parents kept their children at home.

The demands? The PG listed three:

— More boys clubs. “Girls are getting all the breaks in extracurricular activity,” is how the newspaper characterized the complaint.

By Friday, the strike was over. Five ringleaders were arrested and released into their parents’ custody, pending a juvenile court investigation. Principal Fred Glaser told the group to take their complaints to the student council.

The school was calm for several months. Then, in October of 1949, children of steelworkers who were themselves on strike staged their own walkout. Boys agitated for an additional instructor for large gym classes. Girls protested bans on the wearing of “bobby-sox outfits.”

The effort flopped. Students milled around the school’s doorways for a while in the morning, then returned to their classes.

Then, of course, came the turbulence of 1969, a story we told in an earlier Digs post.

And what about the school’s normal days? We found those depicted in Gladstone yearbooks published in 1964 and ‘65 — students grouped according to home room and posing for the school photographer, band members clutching their instruments and standing on concrete steps at the school’s entrance on a sunny day.

One picture from the PG archive shows middle school students sitting at desks the first day of class on Sept. 2, 1980. In the front row, one student wears a shirt reading “Roller Disco,” despite the fact that Donna Summer and the Bee Gees had already fallen out of favor. Disco, like Pittsburgh’s steel industry, was on the wane. Soon the dancing would end. But in the students’ faces you can see expressions of anticipation and optimism. The year was young.