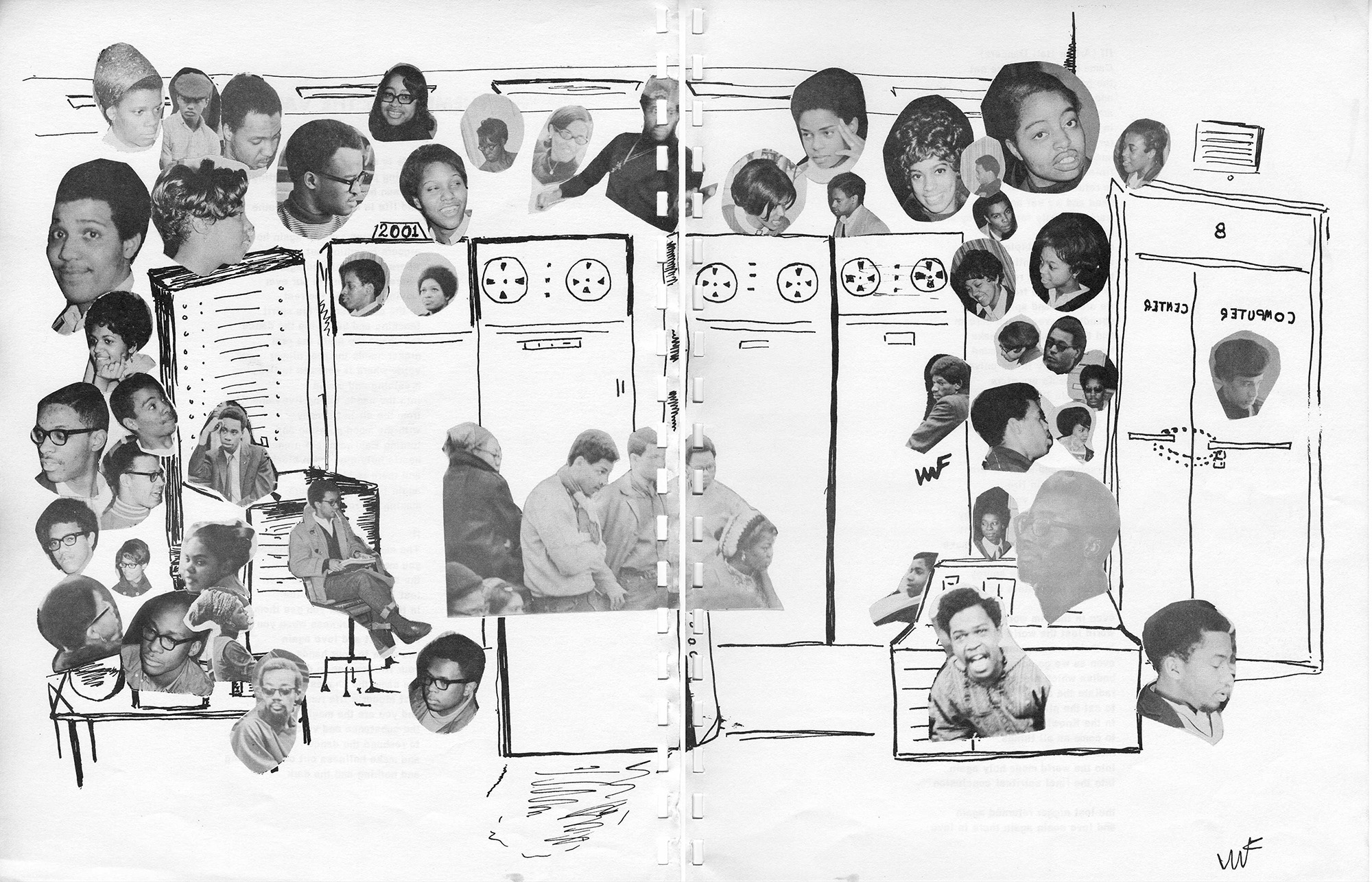 This illustration from the 1968-69 edition of "As-Salaam-A-Lai-Kum," the Black Action Society's annual publication highlighting the black community on and off University of Pittsburgh's campus, depicts those involved in the BAS takeover of the university's computer center on Jan. 15, 1969. (Archives & Special Collections, University of Pittsburgh Library System)

Don’t take the elevator, warned Joseph McCormick. He knew that a group of black guys packing into an elevator would likely draw the attention of security personnel. So the dozen or so students with him hustled to the stairwell, climbed eight floors inside the Cathedral of Learning and stepped into a small entryway. Ahead loomed their destination: A room filled with computers critical to the University of Pittsburgh’s operations. The young men were intent on a takeover.

It was a radical idea, conceived in a Hill District house earlier that day, Jan. 15, 1969 — exactly 40 years after the birth of Dr. Martin Luther King Jr. The previous April, an assassin’s bullet ended King’s life. In several cities, including Pittsburgh, black communities reacted with shock and anger. Neighborhoods burned.

At Pitt, several black students reacted to King’s murder by forming an organization they named the Black Action Society. Those students set in motion a series of events leading to the risky computer room seizure, an effort involving dozens of students and community activists, many playing supporting roles outside the room itself. Before sunrise, members of the newly formed organization would wrest from Pitt administrators changes increasing black presence throughout the university, forever changing the school.

Pitt’s African American Alumni Association honors the 50th anniversary of the takeover at 4 p.m. Tuesday, Jan. 15, in the Kurtzman room at William Pitt Union with an event featuring first-person accounts of the takeover. Oral histories and reflections on the takeover and the early years of the BAS will be published in September in the book, “Say It Loud.”

When McCormick and his fellow students arrived on the eighth floor, they faced an immediate problem: They had no key to the lock computer center doors. A person scheduled to deliver a key earlier had failed to arrive. So the young men waited outside the room and considered their options. Then they got lucky. One of the workers in the computer center opened the door and walked out. Before the door closed, the men rushed in. This is a takeover, they announced to the surprised workers inside. Time for you to leave.

Students secured the doors with chains and padlocks. Inside, one student sat at a console and typed in a command that would, if activated, corrupt the data stored in the computers. The mood was jubilant, recalls BAS member Curtiss Porter. The plan, hatched just hours earlier, was coming together. Perhaps frustration that had been building for months would finally come to an end.

BAS members began negotiating with school administrators in Spring of 1968 and scored early success in gaining recognition, office space and a budget. But negotiations stalled on matters such as increasing black student enrollment (out of 16,000 students, less than 200 were black, the Pitt News reported at the time), hiring blacks in faculty and senior administrative positions and establishing a black studies department

Frustration intensified once students returned from Christmas break in January 1969. King had been dead eight months and still the university had yet to meet many of the BAS’s most important demands.

BAS members chose King’s birthday as a day of activism. In the morning of Jan. 15, teams of black students traveled from room to room, primarily in the Cathedral of Learning, and urged professors to cancel classes in honor of King.

Lora Hubbard, a BAS member majoring in French, remembers that many professors acquiesced. “They were very much into social awareness,” she says. “They’d say, ‘Sure.’ Then we’d address the students and invite them to come with us if they sympathized with our cause. The crowd got bigger and bigger. I thought, ‘These people are actually leaving class!’”

As noon approached, several BAS members, some playing bongo drums, marched unannounced into chancellor Wesley Posvar’s office to ask that he declare the day a campus holiday. Mr. Posvar wasn’t in, so the students waited in an outer room. Mr. Posvar arrived around 3 p.m. and, in a meeting with the students, said he couldn’t simply declare a holiday — that’s not how the university operated.

Afterward, a small group of BAS members — most of whom were a part of the organization’s steering committee — gathered in a house in the Hill District to consider the next step. One student noted that the school’s computer center in the Cathedral of Learning was essential to the university’s operation. Taking control of the center, and threatening the data, could compel the university to action. Or it could result in a strong response by police. Leaders determined to utilize no weapons or violence.

Mr. McCormick, a 21-year-old senior, thought it was possible that students involved would end up in jail. So he passed around a pad of paper among those in the computer center so they could write down information on who to contact in case of legal trouble.

“We realized the sacrifice we were making as students,” says Ms. Hubbard, a BAS member who performed clerical work in the organization’s office as part of her work-study program. “We could have been dismissed from college. And me being the first in my family to attend, that would have been devastating.”

She remembers leaders of the movement being very protective of the computers inside the room. “Don’t touch anything,” she was told. “It was about the threat that something could happen,” she was told, not actual destruction.

Ms. Hubbard yearned to stay in the room and be a part of the takeover, but a close friend insisted she play a different role, so she and a few other women traveled to Hick’s Superette on Centre Avenue in the Hill District to buy snacks and supplies for the activists who remained. They had no idea how long the occupation would last.

The sense of jubilation inside the computer center soon gave way to calm. Computers at the time required cold rooms, Mr. Porter says, so students huddled under blankets and waited. He remembers an air of camaraderie. “All the social groups participated, all the otherwise disparate groups — the serious studio types, the athletes, the jokers, the political action types, the people who played cards. They had all become one group.”

With the room secured, BAS leaders placed a phone call to their offices in the student union, where a three-person team awaited. Their job was to approach university administrators and begin negotiations.

Ms. Hubbard took notes during those sessions, and remembers administrators as being respectful — the threat to computer data motivated administrators to take the BAS demands seriously.

At 3 a.m., the BAS members removed locks and chains from the computer center doors and BAS members relinquished control of the room. After several hours of negotiations, Mr. Posvar had signed off on an agreement to recruit additional black faculty and personnel, appoint a team to recruit more black students, and establish a black studies department. In addition, the university agreed to take no punitive action against the demonstrating students.

Six months later, a recent graduate of Frederick Douglass High School in Baltimore stepped off a plane at Greater Pittsburgh Airport. Linda Wharton Boyd arrived with two suitcases and wore white gloves because, she says, that’s what you did when you flew on an airliner in those days. Her destination: University of Pittsburgh. She’d originally planned on attending Howard University — Pitt wasn’t even on her radar. But then BAS member and Pitt recruiter Luddy Hayden showed up at her high school. Now she was one of 50 new black students entering Pitt as a result of BAS activism.

Ms. Wharton Boyd excelled at the university. She finished her graduate studies in two years, studied in Africa and, at age 25, earned her PhD. in communications. Her professional experience includes stints as spokesperson and director of communications for Washington, D.C., mayors Marion Barry, Anthony Williams and Vince Gray.

Like thousands of others, her journey is a result of the radical actions 50 years ago of the Black Action Society. “They are the roots of the struggle, I’m the fruit of the struggle,” she says. “And there’s a future to the struggle.”