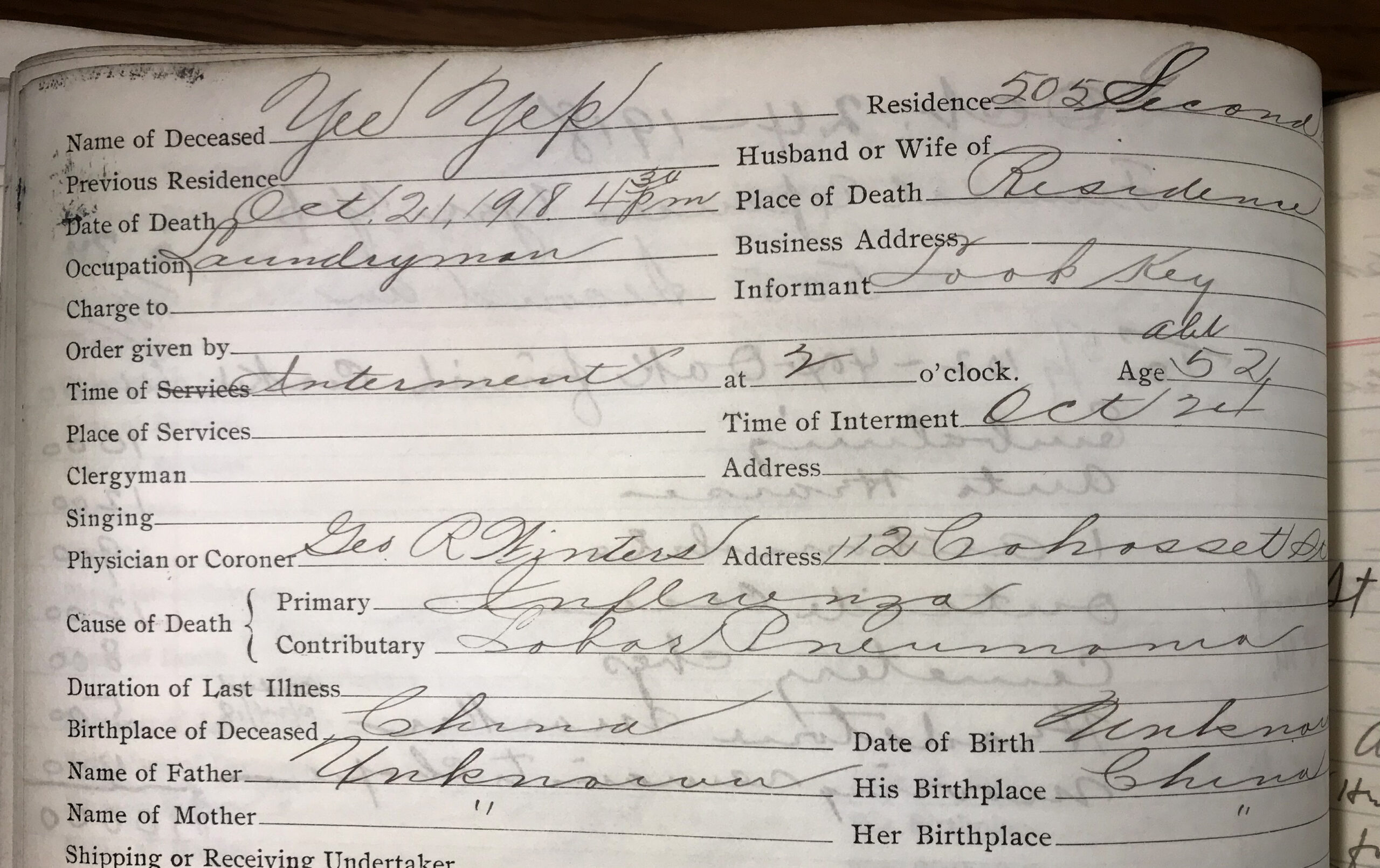 During the height of the 1918 flu pandemic, a single Pittsburgh funeral home received the bodies of more than 30 members of one small, mostly ignored community. All the dead were men. Nearly all succumbed to pneumonia, influenza or a combination of the two.

The men were residents of the city’s Chinatown, a small district centered around one block of Second Avenue between Grant and Ross streets. As many as 500 residents crowded into the neighborhood at the time of the pandemic. Many were men living as boarders, lonely and separated from the families they worked to support. They slept in dim rooms above first-floor tea shops, restaurants or general stores.

Pittsburgh experienced an appalling death rate during the pandemic. Estimates vary, but most studies indicate between 4,500-6,600 residents succumbed to the virus — roughly one percent of the city’s population of 588,000. Newspapers published stories tracking the alarming rate of infection and death sweeping Pittsburgh, peppering their pages with stories of families wrecked by the virus.

“Father and mother are dead and three little children were made orphans as a result of influenza entering the home of Elmer Bambey, 35, and Mabelle Bambey, 31,” read one story in the Pittsburgh Press on Nov. 11, 1918.

But the catastrophe’s impact on Chinatown, just a few blocks from several newspaper offices and the Allegheny County Courthouse, escaped notice. The district was part of the city, yet separate. Few outsiders understood Chinese languages and customs. Residents often wore traditional silks and sandals. Men played mahjong, puffed on small tobacco pipes and chatted in Cantonese. Residents built a cultural oasis within this industrial mecca far from home.

A Post reporter who walked through Chinatown in 1920 wrote, “Here one finds a row of shops bearing Chinese signs and catering, apparently, almost exclusively to Chinese trade.” The reporter described vases decorated with colorful images of dragons but was most keenly interested in the men he saw “standing in the doorways or dimly seen in dark rooms within.”

The 1918 deaths of Chinatown’s men, whose ages ranged from 18 to 69, are revealed in records from the H. Samson Funeral Home, then located in a narrow building at 433 Sixth Avenue. The elegant, handwritten records describe the names, occupations and residences of everyone who ended up in the Samson embalming room. The archive, now housed at the Heinz History Center, also includes records indicating the cost of caskets, flowers and vehicles required for funeral services.

Yee Chin, 38, was a merchant who lived at 519 Second Avenue in a three-story brick building that also housed a tea and general merchandise store. He succumbed Oct. 3, 1918 after a nine-day struggle with pneumonia. His death is the first listed for the month of October.

Twelve days later, on Oct. 15, Lee Gates died of pneumonia at 213 Grant Street, less than a block away. He was 69. His funeral expenses, including a casket, name plate, headstone and cemetery fees, totaled $113.54  — about $1,967 when adjusted for inflation.

Nearly a week passed without a death. Then influenza struck the Chinese district with deadly violence. Beginning Oct. 21 and running through Nov. 19, two dozen Chinese men died of influenza or pneumonia. Nine of those men died at addresses on the 500 block of Second Avenue, the heart of Chinatown. Two others died at 213 Grant Street, the same building where Gates died.

Not all died in their homes. Four Chinese men residing on Second Avenue perished after admission to hospitals. All ended up in Samson’s basement, where they were embalmed at a cost of $10 each.

Those caring for the sick watched as the virus claimed their fellow boarders with gruesome efficiency. Flu symptoms often began with dull headaches, aching eyes, a fever and coughing fits. Sweat poured from victims. Many developed pneumonia, their skin turning a brownish-purple hue as lungs filled with bloody fluid. Later, their feet turned black. Blood poured from noses and burst out of coughs, driving the afflicted into delirium. They often died gasping for air.

Yee Won at 516 Second Avenue became ill in early October. His health improved after two physicians visited to treat him, according to an Allegheny County coroner’s report filed in the University of Pittsburgh archives. The doctors told him to stay inside. Won, whose age is listed as “about 40,” shrugged off this advice and went about his life. His condition soon worsened. On Nov. 5 he entered Allegheny General Hospital and died at 8:39 p.m. that day.

Yee Tal Jung, 50, was ill but wouldn’t take his medication, a coroner’s report says. A doctor named Lutz ordered him to Allegheny General Hospital on Nov. 2.  He died of influenza and pneumonia the next day at 3:45 p.m.

A handful of Chinese men from outside the city appear in the Samson records. Yee Ling of 28 Braddock Ave. in Braddock was ill for a week. His neighbors urged him to go to a hospital for treatment. He tried but was turned away — the hospitals were full, according to the coroner’s notes. So he remained at home, where he died at 12:30 a.m. Wednesday, Oct. 30. That same day, Ying Ling Wah (alias Charlie G. Yow) of New Castle died at 507 Second Ave. He’d come to Pittsburgh to seek treatment for his illness. Death returned to the address a day later, when Yee Kwong, 31, succumbed to the virus.

Only one death in Chinatown caught the attention of the city’s newspapers. The Press, the Post and Gazette Times published small stories on the Nov. 12 demise of Ong Hee Geps, described as the richest Chinese immigrant in the city. He owned a tea shop and a general store on Second Avenue.

“It has been the custom of Chinese residents of this city to bury their dead in Homewood cemetery, and every three years disinter them and send the bones back to the native country,” read the Post. “Owing to the prominence of Ong Hee Geps in the Chinese Masonic fraternity and his wealth, his friends decided to send his body back to Chinas as soon as it could be prepared for the journey,”

The last Chinese death recorded in the Samson records is that of Eng Yuen Toy, who lived at 517 Second Avenue. Influenza and pneumonia claimed him at South Side Hospital on Dec. 2.

As months passed and the pandemic subsided, life returned to normal in Chinatown. It was a brief reprieve for the community. In 1921, city workers showed up with surveying equipment and notifications that many of the area’s Chinese residents had to uproot and make way for construction of the Boulevard of the Allies. In September of that year, steam shovels and trucks arrived to demolish many of the buildings that were home to so much death just a few years earlier. Among piles of debris were tea sacks and remnants of papers bearing Chinese characters.