The day a prince visited the Mon Valley 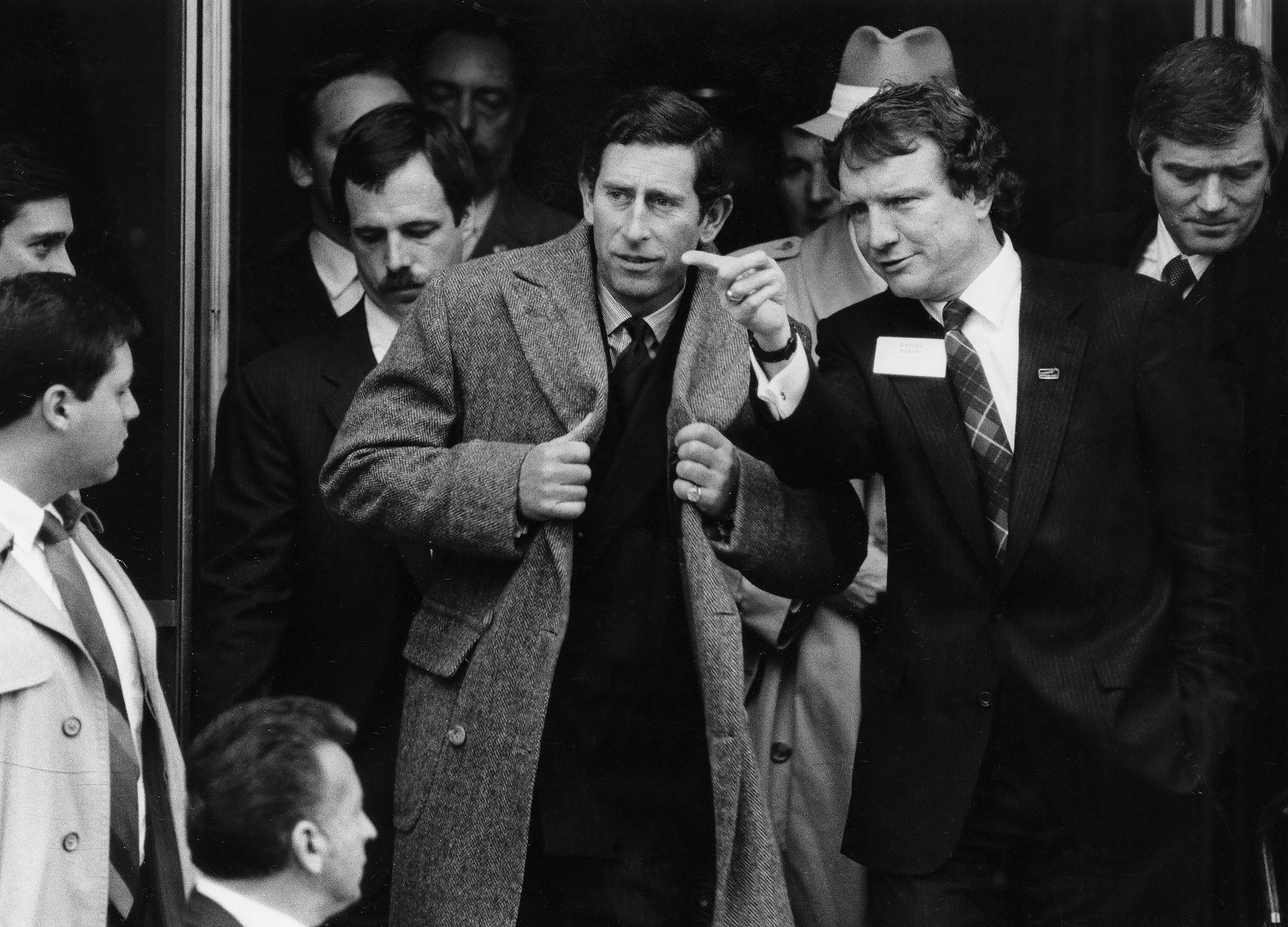 Nothing was clear when Prince Charles of Great Britain stepped off a sleek twin-engine business jet at Pittsburgh International Airport around 11:20 a.m. Friday, March 4, 1988. Large snowflakes drifted down and settled on Charles’ wavy brown hair. The prince apologized for being late, but the weather was to blame. After a brief ceremony with local dignitaries, he climbed into a chauffeured Rolls Royce and cruised in a multi-car caravan down the Parkway West, enroute to Pittsburgh.

The prince had heard about the spectacular view as his vehicle emerged from the northeast end of the Fort Pitt Tunnel, but a thick fog ruined the experience. It was no better on Mount Washington. Holding a black umbrella to ward off a snow squall, Charles stood on an overlook that offered only a vague outline of Pittsburgh’s skyline.

“You should have been here yesterday,” someone said to him.

Things were similarly murky in the town of Homestead. The bitterly cold wind cut through empty steel sheds where workers once earned enough money to buy homes in the suburbs and send their kids to college. The U.S. Steel Homestead Works, closed two years earlier, loomed over the town like a giant corpse. People still traumatized by the mill’s death wrestled over what to do — try shocking the corpse back to life or haul it away in pieces and encourage new life on the site?

The issue deeply interested Prince Charles. He’d become something of an architectural critic. His concern about the built environment and its impact on individuals and communities lured him to Pittsburgh. Here, he was scheduled to address a gathering of architects, academics and others debating ways in which cities and towns could best respond to the brutal realities of post-industrial life.

Those realities were on stark display in devastated Mon Valley towns like Homestead, Braddock, Duquesne and McKeesport. In the days before the prince’s visit, a group of British and American architects studied those towns and delivered a report suggesting several ideas. A proposal to create a “garden festival” on Homestead’s mill site generated the most talk. “It’s the greening of industrial America,” a British architect declared. Other ideas included turning the Homestead riverbank into an esplanade with docks for yachts and converting the Carrie Blast Furnaces across the Monongahela River into a museum.

The proposals intrigued those who believed the mills were gone for good. Others were aghast. They wanted to reopen parts of the Homestead facility and bring back  jobs.

“We were the steel-making capital of the world, and they were talking about flowers,” one former steel worker said later. “We wanted to get back to steel making.”

In Pittsburgh, the prince’s Rolls Royce motored down from Mount Washington and stopped in front of the swanky Duquesne Club. Inside, dozens of people gathered in a dining room for a special lunch. One was 39-year-old George DeBolt, owner of a Homestead bus company. Noticing a bit of activity near the room’s entrance, he turned and asked, “Hey, excuse me, isn’t that Prince Charles?”

Prince Charles waves from his Rolls Royce as it rolls past Fifth Avenue and Wood Street after leaving the Duquesne Club. (Robert J. Pavuchak/The Pittsburgh Press)

“He just kind of nonchalantly walks in,” DeBolt recalled three decades later. “And then the buzz goes around the room.”

After lunch, one of the prince’s handlers approached DeBolt. “Follow me,” he said.

The man walked DeBolt outside to the prince’s Rolls Royce and directed him to take a seat in the back. Minutes later, Charles exited the club and slid in next to DeBolt, The vehicle drove off, past waving crowds, and soon the royal caravan was headed down the Parkway East.

“So, here I am in the Rolls Royce, with Prince Charles in the backseat with me,” DeBolt said.

He was chosen as a guide because the prince promoted the idea that people who live in communities should decide how those communities develop. DeBolt’s ties to Homestead ran deep — his grandfather was a steelworker caught up in the strike of 1892, and the family’s transportation business dated to the early 1900s.

The caravan exited by the Squirrel Hill Tunnel and drove through Swissvale. On the right, the prince saw an oddly shaped two-story brick building with a sign reading, “Triangle Bar & Grill, Destroyers and Battleships.”

“What are battleships and destroyers?” asked the prince, who had served in the Royal Navy.

DeBolt explained that they were big hoagies.

The caravan rolled on, through Rankin, Braddock, Munhall and Homestead. DeBolt and the prince discussed economic development and the importance of getting individuals involved in the process. Charles wondered why the region’s problems had been ignored for so long.

“I realized this guy was really engaged, was really concerned about these industrial towns. And no one had this impression of him in the United States. He was just this playboy. He was Diana’s husband.”

At one point, the prince asked DeBolt if there was something he should include in his address the next day at the Remaking Cities Conference at the Benedum Center in Downtown. “The Carrie Furnace,” DeBolt replied. Production at the historic blast furnaces had ceased in 1982 and some people were rallying to save what remained of the facility as a museum.

The Rolls Royce stopped at Homestead’s Bishop Boyle Center, where the prince reviewed the report compiled by British and American architects and chatted briefly with five Duquesne High School students who’d come up with a proposal for the mill site. One of those students holds vague memories of the moment.

“We were all pretty nervous to meet the prince,” said Heather Bradford (she was Heather Chepanosky then).

Charles, whom she remembered as polite and soft-spoken, asked if any of the students’ parents had worked in the mills. She told him that her father had been laid off in 1982 from the National Tube Works in McKeesport. He eventually found work as a security guard at Thrift Drugs.

The prince was sympathetic. Finding work in the Mon Valley must be difficult, he said.

Moments later, the royal caravan climbed West Street and headed to Steel Valley High School. A marching band played in the parking lot. Inside the school lobby, kindergartener Laura Greenhow stared up at school administrators, board members and high school students. She was the shortest person in the room.

Laura and a few other grade schoolers from nearby Franklin Elementary School had been chosen to meet the prince. She’d spent the morning obsessing over the new pink-and-white striped dress she wore. A pink bow blossomed from her blonde hair, fashioned in a chin-length bob.

“I was 5 and cold and in a very beautiful dress,” recalled Greenhow, now Laura Bransfield and living in Wilmington, N.C . “It was pretty overwhelming for a 5-year-old.”

She doesn’t recall her interactions with the tall prince. “My mom said she thinks he did shake my hand but I don’t know if I remember that part. He was just kind of walking through the lobby.”

Charles wanted to see the high school’s “Office of the Future,” a computer lab on the second floor where students learned skills they’d need in an economy devoid of steelmaking jobs.

Prince Charles gestures toward an aerial photograph of the Mon Valley during his tour of the Bishop Boyle Center in Homestead. (Tom Ondrey/The Pittsburgh Press)

Security was tight. Students and teachers throughout the school were told to stay in their classrooms during the visit. Metal gates blocked access to hallways where the prince walked. Student lockers along his route had been emptied.

Andy Vettel, a teacher in the Office of the Future, lost track of time and wasn’t in place when the prince arrived. To avoid blocked hallways, he hustled up a back stairway and through the school’s library. He emerged from a door near his classroom, alarming tense security personnel. Fellow teacher Maureen Gemeinhart called out to them, “He’s OK, he’s with us.”

The two teachers and several students lined up to wait for the prince. They’d been given instructions on how to greet British royalty. “Don’t extend your hand,” they were told. “But you don’t have to bow or curtsy.”

Then the Prince walked down the line of students and teachers and offered his hand. Gemeinhart was last in line.

“I hope this hasn’t been too much trouble,” Charles said to her.

The prince stayed 30 minutes or so, talking with students who showed off their work. He asked one student about her physics class. He told her he never understood physics; she replied she didn’t either. Like so many others, Vettel and Gemeinhart described the prince as gracious and unassuming.

“He’s a guy you’d want to sit down and have a meal and a drink with,” Vettel recalled.

As he exited the classroom, Charles saw a group of students behind steel gates, struggling to catch a glimpse.

“Why are those students walled off?” he asked.

Without waiting for an answer, he walked up to the steel gate and spent a few minutes chatting with the students.

Charles spent the evening at a Downtown hotel. At his speech the next day at the Remaking Cities Conference, he urged attendees to support efforts to involve citizens in the design and development of their communities. As DeBolt had requested, the prince advocated preservation of the Carrie Furnace.

Before leaving, Charles expressed his disappointment at being robbed of the spectacular view of Downtown from the Fort Pitt Tunnel. He had decided, he said, to remedy the situation by leaving the city backward.

“So don’t be alarmed if you see me reversing out of the city,” he said. “It’s not a technical malfunction of a Rolls Royce, but purely my desire to see Pittsburgh properly.”

In the three decades since Charles’ visit, the Homestead mill site has experienced dramatic changes. Where steelworkers once made rails for railroads, armor plate and beams for skyscrapers and bridges, people at The Waterfront play arcade games, order up food items ranging from bagels to sushi, shop for groceries and clothing, attend movies, learn to throw an axe and work in offices. Luxury apartments line the riverfront.

Debolt wishes the site had been used for residential housing, like the Summerset at Frick Park development on the edge of Squirrel Hill. “You would have all these people living in Homestead with a stake in the community,” he said. “That would have been the best.”

The Carrie Furnace received designation as a National Historic Landmark in 2006. Today, it looms over the northeast shore of the Monongahela River as a reminder of the industry that once dominated the region.

When DeBolt was approached about serving as a royal guide in 1988, someone told him that the experience would mark him for life. He’s found that to be true.

“People still say to me, ‘Hey, aren’t you the guy who took the Prince around?’ Now see, that was over 30 years ago. But people still remember that.”