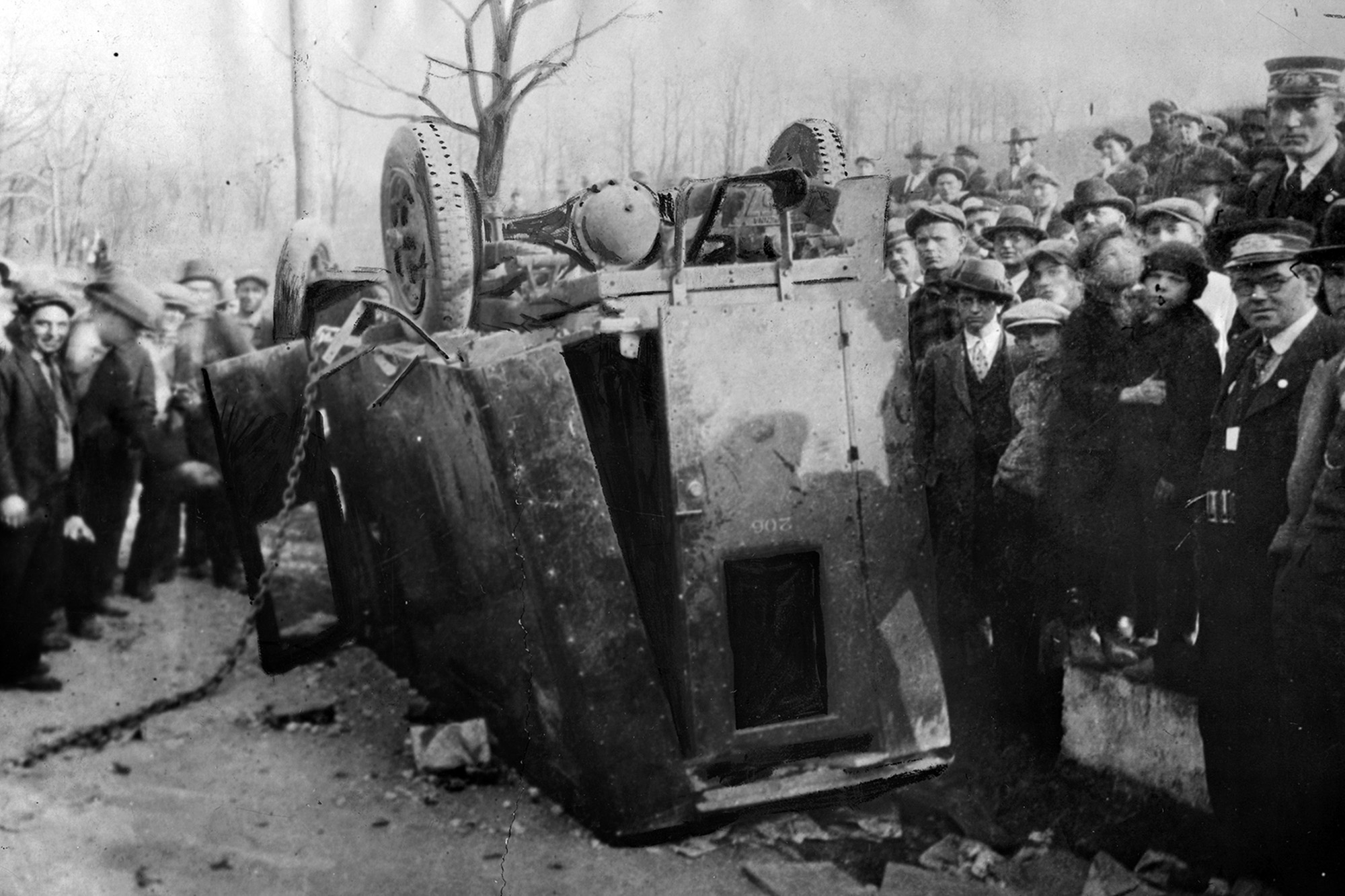 William Tarr worked as a chauffeur and a salesman before landing a job as a driver for the Brinks Express Co. in the 1920s. It was a dangerous gig. The Brinks company delivered payroll to coal mining companies in the South Hills. Bandits lurked along the area’s isolated roads. Guards carrying thousands of dollars were juicy targets.

On Dec. 23, 1922, robbers ambushed coal company clerk J. R. Dennis as he escorted a payroll vehicle along Beading Road in Mt. Lebanon. Gunmen hiding behind bushes fired shotgun blasts that knocked Dennis from his motorcycle and stopped the convoy. As Dennis rolled on the road, one gunman pumped two shells into his back. The thieves stole $19,400.

Tarr knew he could be a target. On March 11, 1927, his armored vehicle carried $104,205 in 1,700 envelopes to be distributed to employees of Pittsburgh Terminal Coal Co. mines in Bethel Park. The sum dwarfed the hauls of earlier heists. Tarr could take comfort in the fact that his vehicle was heavily armored. Also, the holiday season that was so enticing to robbers had passed. March 11 was just another payday.

By the time mine whistles sounded at noon that day, Tarr and his colleagues had completed two deliveries and were rumbling their way to a third. The Brinks vehicle, followed closely by guards traveling in an automobile, turned onto a stone-paved lane called Old Bethel Road.

No one in either vehicle paid much attention to two stacks of newspapers at the side of the road. To a group of men hiding behind a tree stump in a nearby woods however, the papers were a marker. When the armored vehicle drew even with a stack, robbers in the woods pressed a plunger that sent an electrical charge to black powder buried under the road’s surface.

The explosion launched a geyser of earth and tossed the armored truck into the air. It turned a backward somersault and crashed onto its roof. Tarr and his colleagues ricocheted off the walls. A moment later, another explosion sent the trailing vehicle skyward. It nosedived into a 4-foot crater. Guards in both vehicles were knocked senseless.

Gunmen emerged from the woods and rushed to the armored truck. The violence of the blast had cracked open its rear door. Thieves entered and began unloading bags of cash.

Tarr was the first of the Brinks employees to regain consciousness. Bleeding from cuts on his face, he began extricating himself from the wreckage. A gunman ordered him to lie face down in the mud.

Tarr stole a glance at the bandits’ vehicle, noted its blue color and license plate number: PA 602-896. That information would prove useless; the plate was stolen.

He also got a good look at the robbers’ leader. The man was in his late 20s, stood 5-foot-5 and sported a flat nose. Police later identified him as Paul Jawarski (sometimes spelled Jaworski), a prolific and deadly holdup man with links to past payroll heists. On this day, Jawarski made history by pulling off the nation’s first armored car robbery. Tarr was doomed to the role of unlucky Brinks driver.

Finished with their work, the bandits sped away. A flat tire slowed them and police captured Jawarski in a nearby farmhouse. He didn’t seem very bright, they said. He was playing dumb. Mayhem remained in his  future.

A jury convicted Jawarski of the 1927 armored car heist and of killing Gump in the Christmas 1925 robbery. A deal to plead guilty to the Dennis murder in 1922 fell through. Jawarski remained in the Allegheny County Jail until  Aug. 18, when his brother, Sam, and a friend entered the facility with weapons. Bullets pinged off steel bars while Jawarski was hustled to a waiting vehicle.

A year later, police in Cleveland wounded and recaptured Jawarski after a shootout. Limping from a gunshot wound, he stuck a stogie into his mouth as he entered the execution room at Rockview Prison on Jan. 21, 1929. Minutes later, Jawarski died in the electric chair without a priest by his side.

Tarr remained an “express company” driver for Brinks until at least 1930, census data indicates. He lived in a two-story house on South 19th Street on the South Side with his mother, Elizabeth, and older brother, Jacob.

He died Oct. 18, 1933, four years into the Great Depression. The cause: acute appendicitis. He was 42 and jobless.

Sources: Details about the robbery and Paul Jawarski’s exploits were gleaned from 1927-1929 editions of several Pittsburgh newspapers: The Daily Post, the Pittsburgh Gazette-Times, the Post-Gazette and The Pittsburgh Press. Information about William Tarr’s work history and cause of death were found in census reports, city directories, a draft registration card, and a death certificate, all accessed through ancestry.com.