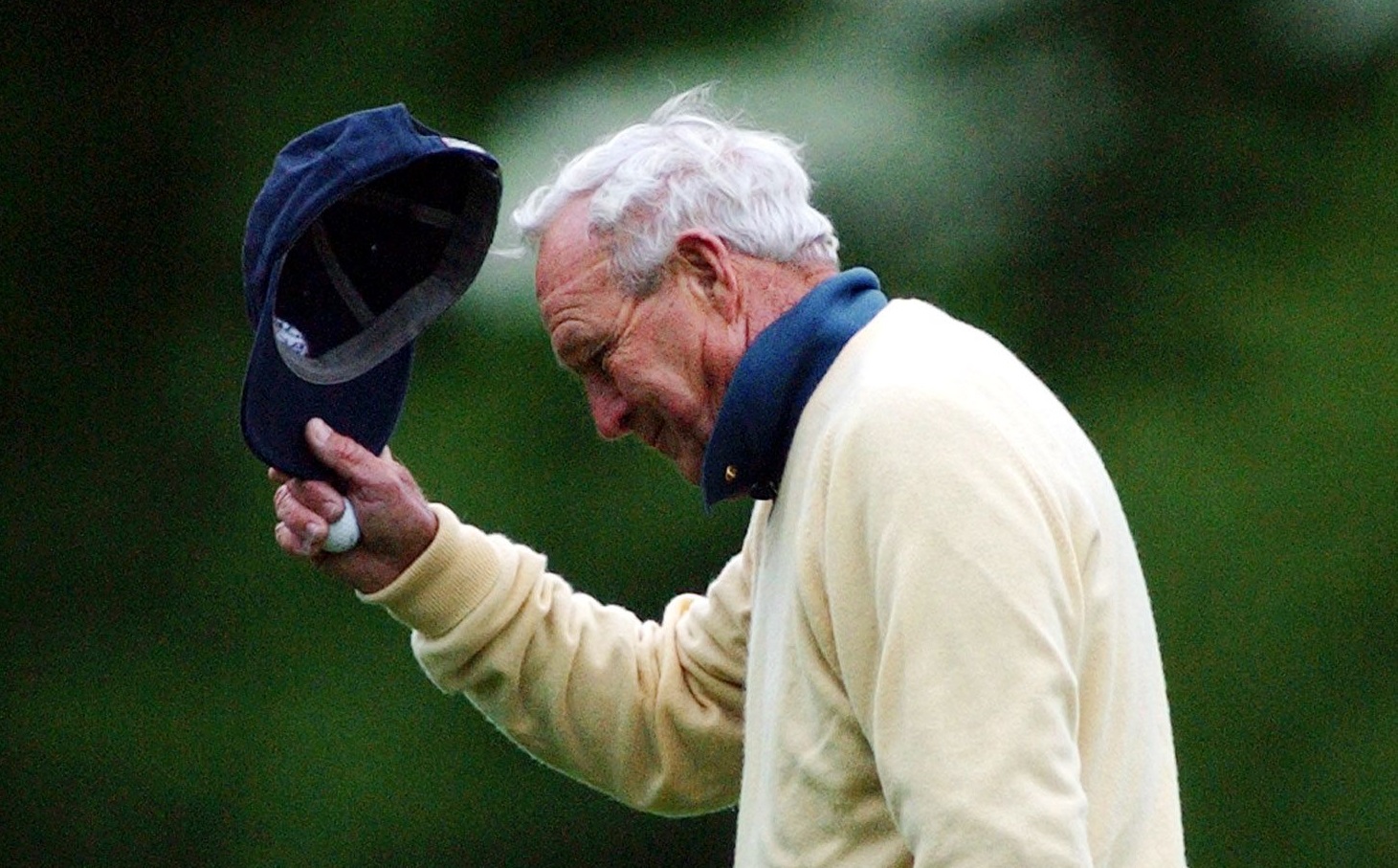 Arnold Palmer tips his hat to the gallery as he walks on the 12th hole during first round play of the 2003 Masters. (David Martin/Associated Press)

Nathan Smith thought he was lucky when he got to play a Tuesday practice round with Arnold Palmer at the 2004 Masters.

The moment was significant for several reasons for Smith, a Brookville, Pa., native and one of the most decorated amateurs in Western Pennsylvania history. He was making his first appearance at the Masters as the reigning U.S. Mid-Amateur champion, a title that historically carries an invitation to the first major of the season.

But this Masters was special because it would mark the 50th and final competitive appearance for Palmer, a four-time winner of the green jacket and one of Augusta’s favorite adopted sons.

“I couldn’t believe I was getting to do that — playing a practice round with the King at the Masters,” Smith said. “Very cool.”

But that wasn’t the coolest moment of the day. When the pairings for the tournament were released after his practice round, Smith found out he was paired with Palmer for the first two days. That meant Smith, now 38, would have a front-row seat for the King’s final coronation through the pines at Augusta National.

“It was so surreal when I think back about that,” Smith said. “And he couldn’t have been nicer to me.”

Right down to the apology at the end of two days.

Smith needed only a par at the final hole to make the 36-hole cut and play on the weekend at the Masters. But, not wanting to interfere with the moment and trying to stay out of Palmer’s way for the King’s triumphant stroll up his final Masters fairway, Smith made double-bogey 6 at No. 18 and missed the cut by two shots.

“We’re shaking hands on the green and he says to me, ‘I’m sorry that happened to you, it happened to me before,’ ” Smith said. “I didn’t know what he meant at the time. I was totally numb.”

Smith can only assume the reference was to Palmer making a double bogey at the 72nd hole and blowing a two-shot lead that handed the 1961 Masters to Gary Player.

Smith went on to three more U.S. Mid-Amateur titles — more than anyone in history — and to be selected to three U.S. Walker Cup teams, the most by any amateur in Western Pennsylvania history, including Palmer.

His record as an amateur, and his professional friendship with Palmer, eventually led to Smith receiving an invitation from the King to play in the PGA Tour’s Arnold Palmer Invitational at Bay Hill in 2014. But Smith isn’t the only golfer from Western Pennsylvania who was impacted by the greatness of the man who is generally regarded as the most famous golfer of all time.

World Golf Hall of Famer Carol Semple Thompson and Oakmont Country Club professional Bob Ford could all recall their first or most special encounters with Palmer when they learned of his death. Rocco Mediate, a six-time winner on the PGA Tour and two-time winner on the Champions Tour, grew up right down the road in Greensburg and met Palmer for the first time when he was 16.

Thompson first met Palmer at a dinner at the Hilton, Downtown, that honored her parents. Palmer was friendly with Thompson’s dad, Harton “Bud” Semple, a former past USGA president; his wife, Winnie, was friendly with Carol’s sister, Heather.

“His aura made me very proud to be from Western Pennsylvania,” said Thompson, a Sewickley native who won seven United States Golf Association titles in her decorated amateur career, a number exceeded by only four other players in history — Jack Nicklaus, Bobby Jones, Tiger Woods and JoAnne Carner. “He was so great with people and, of course, he was the most fantastic person of his time. That, combined with his personality, is what made him the King.”

Ford has never forgotten his first meeting with Palmer.

He was working as a volunteer assistant at Oakmont for the 1973 U.S. Open when Palmer came in the pro shop to see head professional Lew Worsham, who won the 1947 U.S. Open at St. Louis Country Club. Minutes later, Nicklaus walked in for the same reason. Ford got to shake Palmer’s hand.

But his biggest thrill came five years later, right before the PGA Championship at Oakmont. Palmer called the pro shop the week before, looking to play a practice round and asked if one of the assistants would like to play with him. So Brett Upper, now the head professional at Arizona Country Club, played the front nine with Palmer. Ford played the back.

When Ford qualified for the 1983 U.S. Open at Oakmont, he asked Palmer if he could play a practice round with him. The King obliged.

“It was really important for me to play a practice round with him,” Ford said. “Arnold told P.J. Boatwright [USGA president] that we had five [players] and he said, ‘OK, just keep up with the group ahead.’ ”

In 1990, when he qualified for the PGA Championship at Shoal Creek in Birmingham, Ala., Ford pulled into the parking lot and saw Palmer changing the grips on his clubs from the trunk of his car.

Thrilled, Ford did. And he has never forgotten his kindness.

“He showed you how to act and treat people and how to be a gentleman,” Ford said. “The extraordinary thing about him is he always kept his home in Latrobe and stayed there and how modest everything about him is, from his office to his club to his home.

“He’s one of the most iconic men in the world, and all he wanted to be was one of the guys. That’s all he ever was. He would sit down at the round table in the grill room, have a beer and hold court and be one of the guys. So many of those other guys, their time is so valuable to them, they end up becoming hermits. They disengage from their friends and where they came from. Not Arnold.”

Playing in the 1993 Palmer Cup matches at Latrobe Country Club — an annual event pitting club professionals from the Tri-State PGA section against the top amateurs in Western Pennsylvania — Ford was 9-under par after 14 holes and had already won his two-ball match with partner Ned Weaver. Ford, though, was being encouraged to play all 18 holes just to see if he could eclipse the club record of 12-under 60, held by Palmer.

Out of respect to Palmer, Ford wouldn’t do it.

“It never entered my mind,” Ford said. “Not in front of the King.”