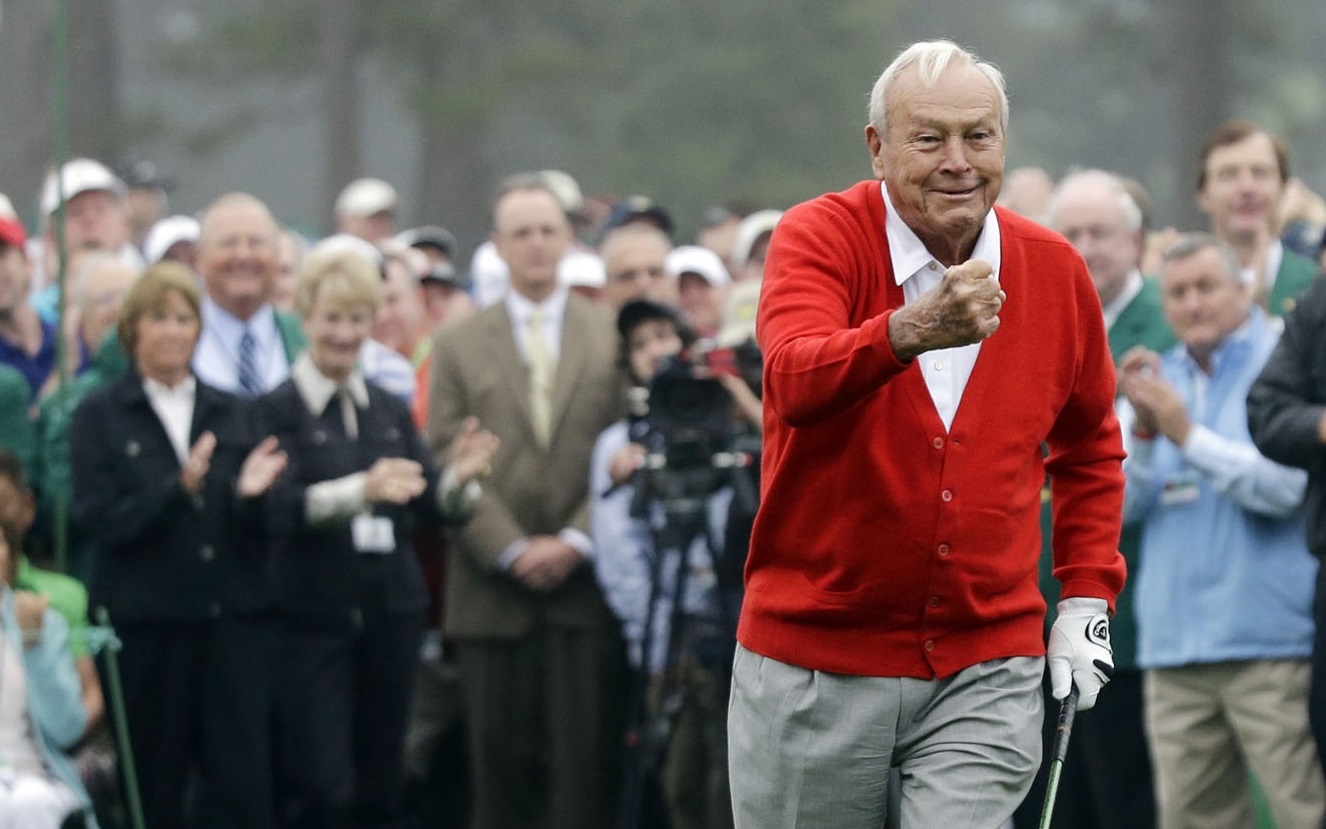 Honorary starter Arnold Palmer reacts after hitting his ball on the first tee before the first round of the Masters golf tournament April 11, 2013, in Augusta, Ga. (AP Photo/David J. Phillip)

Some memories of Arnie, dead at 87. Some might say he now belongs to the ages. But he has long since belonged to the ages.

Forgive the first-person jottings. Writing about Arnie is nothing but personal.

Arnold Palmer is the only golfer I know of — in fact, the only sports figure — to have a plaque commemorating his failure.

Palmer has three plaques to three historic successes. The greatest of these was the making of the Masters, at Augusta National Golf Club, a Shangri-la that teetered for years. Then, Palmer won the first of his four Masters in 1958.

“From the day he set foot on the grounds, the tournament has never been the same,” said the late Jack Stephens, Arkansas billionaire, then chairman of Augusta National and the Masters. “Before Arnold, we had to give tickets away. After Arnold, we even had a waiting list.”

The plaque is a heavy metal slabfixed to the drinking fountain at the tee of the par-3 16th, bearing an inscription 16 lines and 144 words long, and saying: “Thanks, Arnie.”

In the 1995 Masters, Arnie arrives at the 16th tee, checks the plaque and turns to the jammed gallery.

“Is the water in that fountain any good?” he cracks.

Came a woman’s voice: “You made it holy, didn’t you, Arnie?”

In the 1960 U.S. Open at Cherry Hills, he was seven shots behind going into the final round, drove the first green, 346 yards — a plaque salutes that epic shot — birdied six of the first seven holes and shot 65. It was his only U.S. Open victory.

At Royal Birkdale in England, in the foul weather of the final round of 1961 British Open, Palmer drove into a drenched and tangled mess to the right at the par-4 15th. Rejecting the prudent move — chopping backward to the fairway — Palmer ripped a 6-iron through the dense growth, hit the green, parred the hole and went on to win by a shot.

A plaque at Rancho Park also celebrates Arnie’s heroics, this at the 1961 Los Angeles Open. Same boldness, same grab-it-by-the-throat game. He was in contention coming to the par-5 No. 9, his final hole in the second round. He could taste the eagle. The green was a 3-wood away, but a tight fit. He hit two balls out of bounds one way, two more the other, and made 12. He missed the cut.

Arnie Palmer made golf what it is today. Through rugged good looks, bold, bold play and a personal magnetism that pegged the meters.

Before Arnie, golf was pretty much considered elitist, distant, exclusive. And refined. The chamber music of sports.

Arnie was the guy who phoned you at quitting time for a quick nine. The other pros ground away in solemn, simmering silence. Arnie worked the crowd.

Arnie came along at the right time in history. The stars lined up with a click of the cosmic tumblers. Television was just warming up in the world of sports. He would make it hum. The combination was devastating.

Suddenly, it was OK to like golf. It was OK to get a set of sticks and head for the course. By the droves. And the country club rolls were filling up. Women loved him. So did men. Arnie’s Army was everywhere. Even Dwight David Eisenhower enlisted. Eventually, it was estimated that about 25 million Americans were playing golf. And they took the equipment manufacturers and course builders with them.

And if he made the Masters, he also put sparks in the U.S. Open and resurrected the British Open. And he was always the guy you could have a beer with.

Arnie, a giant, was smaller than I thought. Just about 5 feet 10, 185 pounds. But he had the build of a linebacker, fists like hams.

“I wanted to go out for football,” he said. “Ninth grade. But I was too small. They didn’t have a uniform that would fit me. I went home crying.”

And he got one of his many of what they call “life lessons” from his dad.

“Pap told me to shut up and quit crying,” he said. “He told me if I couldn’t play football, then play golf.”

Arnie got another lesson the time he won his first West Penn Amateur, while still in Latrobe High School. He recalled getting into the car with his mom and dad, floating so high he’d forgotten he’d thrown a club.

“I thought Pap would really be happy,” Arnie said. “But it was really cold in the car. Then Pap said, ‘If you ever do that again, you won’t play golf while you live in my house.’ ”

Milfred “Deacon” Palmer, the definitive no-nonsense dad, was the greenskeeper and golf pro at Latrobe Country Club. During World War II, he also worked in the melt shop at Latrobe Steel.

“When he died,” Arnie said, “you could still see the burn marks where the molten steel splashed on him.”

Arnie wasn’t born with a silver spoon. It was wooden. As a kid, he had to haul water for his mom to cook and wash clothes at their home, near No. 5 at the club. Later, he was a bricklayer’s helper at the mill, and lined the big furnaces with those heavy, sharp refractory bricks. One day, he would become fabulously wealthy, own and pilot his own plane, buy Latrobe Country Club, then Bay Hill, a resort in Orlando, Fla.

“What would you have liked to be if your weren’t a golfer?” I once asked him.

I didn’t want to ask about the prostate cancer, but how can you not. He was graceful, even clinical. He said the numbers were very good, and it had been some time.

Arnie, the realist, smiled around his chilling answer. “We don’t know that yet, do we?” he said.

But it seems everything about the cancer was OK.

I got the greatest interview of my career from Arnie. But I remember only the first 13 words.

(I wasn’t prepared for this, not after all the spoiled, entitled, angry athletes I’d dealt with.)

It was in the 1976 Masters, my first. Palmer shot 81 in the second round. Anyone can shoot 81, but when Arnie Palmer does it, it’s news. I headed for the locker room, reluctantly. Five other writers had the same idea. We found Palmer at his locker, staring at the floor.

“Arnold,” one writer said, breaking the awkward silence, “we hate to have to talk to you at a time like this …”

“Fellas,” he said, “we talked when times were good, we’ll talk when times are bad.”

Arnie, there were no bad times talking to you.

Marino Parascenzo, a past president of the Golf Writers Association of America and a recipient of PGA of America’s Lifetime Achievement Award in Journalism, retired from the Pittsburgh Post-Gazette in 1999 after 35 years as a sports writer.