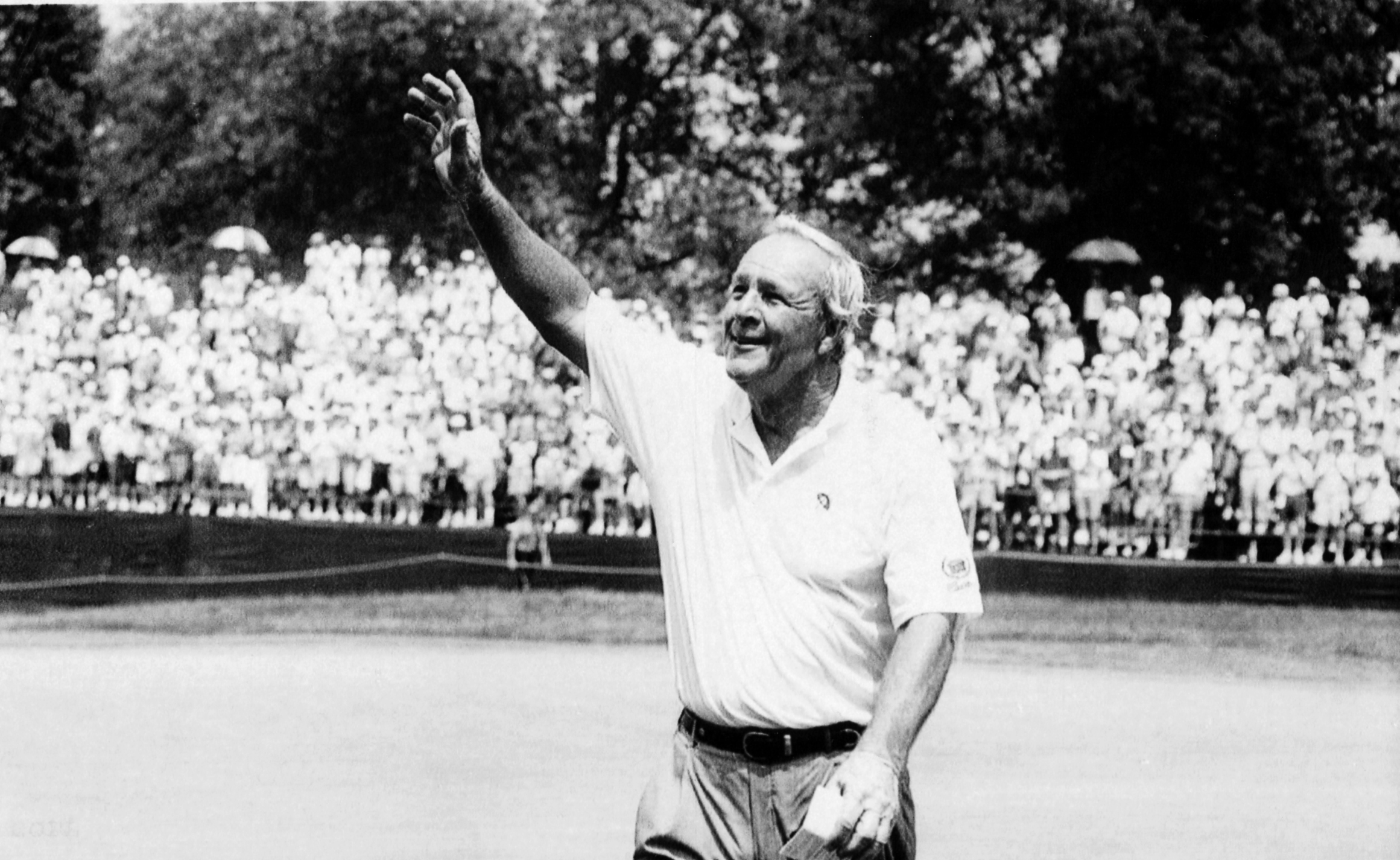 The day President John F. Kennedy was shot. The day astronaut Neil Armstrong walked on the moon. The day terrorists changed the world forever with their attacks in New York, Washington and Shanksville, Pa.

You remember every detail, from where you were to what you were doing.

It started on a hot, steamy morning at Oakmont Country Club, site of the 94th U.S. Open. It was the day Arnold Palmer played the final round in his 32nd and final Open championship.

It ended that evening in front of a television at a long-gone tavern in Cranberry Township. It was the day double-murder suspect O.J. Simpson led Southern California police on a slow-speed chase south on Interstate 405 in his infamous white Bronco.

Sam Saunders, a professional golfer and grandson of Arnold Palmer, discusses a favorite memory of his grandfather. (Video by Steve Mellon)

Palmer was 64 and had no chance of winning. He hadn’t played in an Open since 1983 — the previous time the championship was at Oakmont — when he finished tied for 60th place. He needed 81 shots to get around the brutal course in the suffocating heat. “An awful round of golf,” he would call it.

But it didn’t matter to Palmer’s thousands of fans. Arnie’s Army was out in full force — the heat and humidity be damned — to see him one final time at Oakmont. It certainly didn’t matter to me. I followed him all day and watched him make each of those 81 shots. I knew I was lucky to be seeing golf history from on the tee boxes and inside the ropes. I could have watched him take 81 more shots.

Palmer always called Oakmont “my favorite place to play golf.” It was his course, only a couple of good drives and maybe a 3-wood from where he grew up in Latrobe and still lived part of the year. These were his fans. They loved Palmer because of his swashbuckler mentality, sure. “He never saw a pin he didn’t love and never saw a hazard he didn’t think he could carry. We lived and died with him,” longtime Oakmont pro Bob Ford said Monday. But the masses mostly loved Palmer because he was one of them, a man of the people despite being the world’s most famous and influential golfer, an effective pitchman who made you want to buy a Rolex watch, drive a Cadillac, thin your blood with Xarelto and put Pennzoil Motor Oil in your lawnmower the way his pop, Deacon, did in the old family tractor. Palmer made $42 million in endorsements as recently as 2015, yet would share a kind word with anybody he met just as easily as he broke bread with presidents. One day, he posed for a an all-time classic picture with Muhammad Ali at the 2007 FedEx Orange Bowl when he was honorary captain of his alma mater Wake Forest and Ali was representing his hometown Louisville team. The next day, he signed autographs for everyone who asked.

Did I say man of the people?

But Palmer’s four previous Opens at Oakmont were cruel to him. He missed the cut in his first Open in 1953. He lost an 18-hole playoff to Jack Nicklaus in 1962 and, after chiding his fans for cheering so vociferously against Nicklaus and taunting him because of his weight, said of the first of Nicklaus’ record 18 major championships, “Now that the big guy is out of the cage, everybody run for cover.” Palmer lost in 1973 when Johnny Miller “tore his heart out” — Ford’s words — by shooting 63 in the final round. He wasn’t a factor in 1983.

“To win an Open in his hometown — in Western Pennsylvania — would have meant the world to him,” Ford said. “Not winning was probably his greatest disappointment in golf.”

The final round in 1994 was difficult for Palmer in a much different way. He said he played at Oakmont for the first time when he was 12 and now, more than 50 years later, he was going to play a competitive round on the hallowed course one last time. In a matter of a few hours, it was going to be over. Where did the time go? Where did his golfing life go?

“That was hard for me to accept,” Palmer told me a few days before the U.S. Open returned to Oakmont in 2007. He was sitting in his Latrobe office, the headquarters of his business empire and a shrine to his career. “This was it for me, as far as playing in the U.S. Open. This was when I had to say adios. It overwhelmed me.”

Palmer played that final round with Rocco Mediate, who grew up in Greensburg idolizing the man he later would lovingly call “The King.”

“I had no business playing that week. My back was killing me,” Mediate said years later. “But to be able to play in the Open at Oakmont with Arnold Palmer? I’d have crawled around the course if I had to. So I did.”

Mediate had the best seat in the house for what he called “the most amazing thing I’ve ever seen in sports.” It started from the moment Palmer was introduced on the first tee box, gradually built in emotional intensity as The Army gathered more and more troops at each hole and finally peaked when Palmer walked up the 18th fairway to a deafening roar from the crowd that was easily 10-20 deep on each side. I’m guessing Mark Messier and the New York Rangers felt something similar when they paraded through the Canyon of Heroes on that same June 17 day in celebration of ending the team’s 54-year Stanley Cup drought. A once-in-a-lifetime moment.

So it was for Palmer.

Mediate was the first to Palmer after Palmer finally sunk his third putt to finish his round and his Open career.

“Thank you for making all of this possible,” Mediate whispered into Palmer’s ear as they embraced.

The worldwide popularity of golf. The enormity of the Open. That amazing crowd at Oakmont. The astonishing money in the game that made millionaires many times over of Tiger Woods, Phil Mickelson, Rory McIlroy and so many others.

“He lost it right there on the green,” Mediate said. “I loved it.”

Palmer dissolved into tears again a few minutes later when he tried to meet the media. “It’s been 40 years of fun, work and enjoyment,” he said, softly, before burying his face and sobbing into a white towel.

An embarrassed Palmer would say later, “I’m a sentimental slob.”

No explanation or apology was necessary, of course. A lot of people cried with Palmer that day. A lot more cried Sunday night when they learned he died of heart failure, just 15 days past his 87th birthday. Only the death of Roberto Clemente and Art Rooney Sr. touched so many in our city in such a profound way.

Palmer made his final significant public appearance at The Masters in April and had to be supported by Nicklaus and the third member of golf’s long-ago famous “Big Three” — Gary Player — with each grabbing an arm. Palmer was too frail to attend the Open at Oakmont in June.

Thank goodness for those memories from 1994.

I’m thinking Palmer went home to Latrobe that surreal afternoon and re-hydrated with a cold beverage, likely a refreshing Arnold Palmer. He almost certainly turned on his television and did what millions of Americans did that night — watch the O.J. car chase. Palmer and Simpson were friends at one time and did a TV commercial together in 1987 for Hertz Rent-A-Car.

Is life amazing or what?

Ron Cook: rcook@post-gazette.com and Twitter@RonCookPG. Ron Cook can be heard on the “Cook and Poni” show weekdays from 10 a.m. to 2 p.m. on 93.7 The Fan.