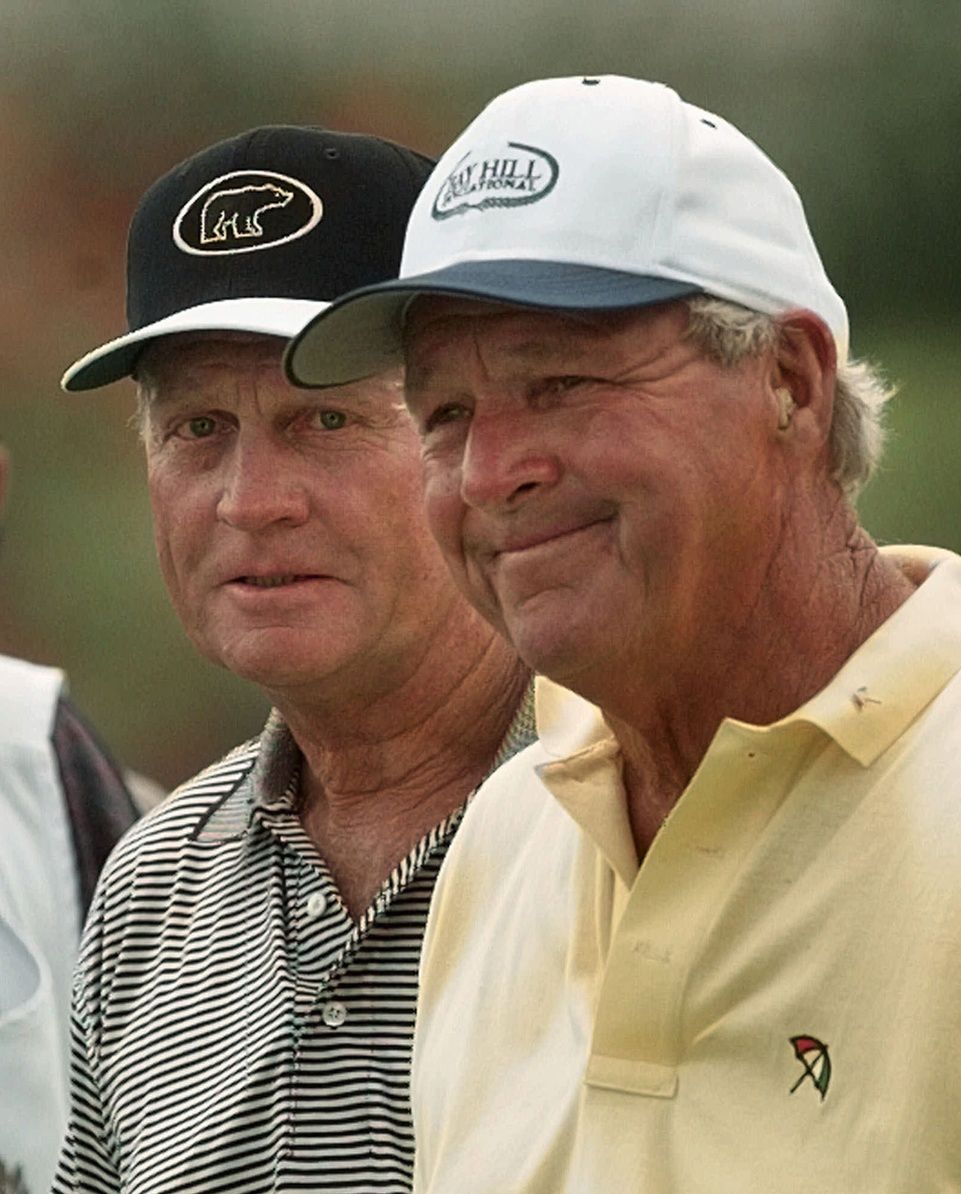 Jack Nicklaus, left, and Arnold Palmer walk off the ninth hole after both making birdie during first round play of the PGA Seniors' Championship at the PGA National in April 1998. (Hans Deryk/Associated Press)

The boy Jack Nicklaus met “The King” Arnold Palmer Sept. 25, 1958, at Athens Country Club in southeast Ohio. They were paired together for an exhibition round on “Dow Finsterwald Day,” celebrating the reigning winner of the PGA Championship. Their ferocious yet friendly rivalry began with a driving contest on the first hole. Nicklaus, the 18-year-old Ohioan amateur, prevailed.

Palmer, the 1958 Masters champion, shot a 63 and defeated Nicklaus by four strokes. Palmer grinned and told Nicklaus, “I got ya.” But both scored a victory they would remember.

“We loved beating each other,” Nicklaus said on ESPN’s “SportsCenter” earlier this week, reflecting on their relationship after Palmer died Sunday at 87. “That’s what wound our watches, so to say.”

Nicklaus and Palmer. “The Golden Bear” and “The King.” They were the game’s greatest golfer, and its most popular one. Nicklaus won a record 18 majors. Palmer won 62 PGA Tour events, including seven majors. Linked with Gary Player, the trailblazing triumvirate pushed the game to the fore in the 1960s, the early years of the television age that revolutionized and commercialized the sport.

The Palmer-Nicklaus rivalry lived long and never soured. Nicklaus, 76, phoned Palmer on his 87th birthday Sept. 10. Palmer was in declining health, that much was no secret. Palmer died two weeks later at UPMC Shadyside while awaiting surgery for a heart valve replacement.

Nicklaus penned a lengthy tribute. He and the game of golf, he wrote, had lost a great friend.

“My friend — many people’s friend — just wore out,” Nicklaus wrote in a note posted to Twitter. “I know he was in Pittsburgh trying to find out how to make himself better. That’s what Arnold has always tried to do. He has always been a fighter and he never gave up on anything. He didn’t give up even now. Maybe his body did, but I know Arnold’s will and spirit did not.

“He was one of my best friends, closest friends, and he was for a long, long time. I will miss him greatly.”

Nicklaus painted Palmer as an icon, a legend and a pioneer, one who “took the game from one level to a higher level, virtually by himself.” Nicklaus wrote he counted himself a member of “Arnie’s Army,” a crush of Palmer supporters that for so long kept Nicklaus in its crosshairs.

Nicklaus has often joked he never had to fight Palmer; he only had to fight Palmer’s fans. The enmity began, of course, with the 1962 U.S. Open at Oakmont Country Club. Crowds tramped the course behind Palmer, the pride of Latrobe, and rather disliked the hard-charging Nicklaus.

On the 72nd hole, Palmer missed a 10-foot putt and settled for a 1-under 283, forcing an 18-hole playoff with Nicklaus. A green-coated marshal at the 18th green remarked to a Pittsburgh Press reporter, “It’s Arnold’s Open. Look at that gallery die.”

The playoff, billed by Press reporter Bob Drum as “the king of the amateurs against the king of the pros,” went Nicklaus’ way from the start. He led by four strokes after six holes. Palmer’s comeback effectively ended with a bogey at 13, his 10th three-putt of the tournament — Nicklaus had one. Drum’s front-page story Monday was accompanied by this headline: “Jack the Giant Kills Off Arnie.”

“Like Mudville, there was no joy in Oakmont yesterday,” Drum wrote after Nicklaus’ three-stroke win. “But, this time the mighty Casey didn’t strike out. The batter in front of him won the game.”

Palmer seemed unshaken afterward, saying: “I can’t play better than I played here and I couldn’t win. And that Nicklaus, he won’t give anything. He played super.” He also told reporters, “Now that the big guy [Nicklaus] is out of the cage, everybody better run for cover.”

If the driving contest at Athens Country Club started the on-course rivalry, the U.S. Open kicked it into top gear. It also spurred a special, enduring friendship between two all-time golfing greats.

“We were great competitors, who loved competing against each other, but we were always great friends along the way,” Nicklaus wrote late Sunday night. “Arnold always had my back, and I had his. We were always there for each other. That never changed.

“He was the king of our sport and always will be.”