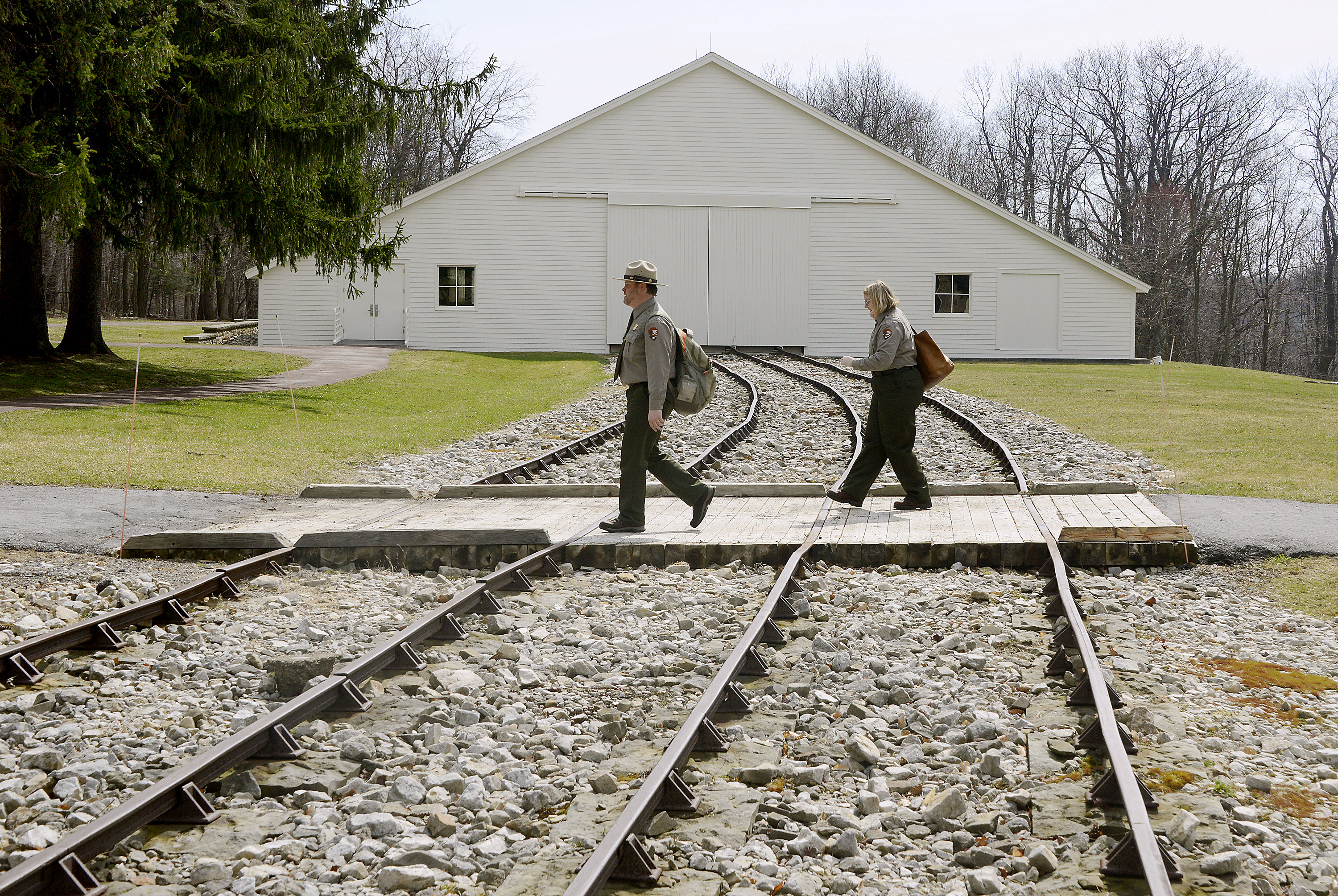 Doug Bosley and Megan OMalley walk over the rails leading from the replica of Engine House #6 , which was the high point of the Allegheny Portage Railroad. Two steam engines were used in each of the Engine Houses. (Darrell Sapp/Post-Gazette)

If there are national parks for nerds, the Allegheny Portage Railroad historic site is one of them.

The story of the railroad itself is about creative engineers and hard-working laborers, with the financial backing of the state government, jury-rigging a way to get railcars up and over the formidable Allegheny Mountains — testing new materials and new technology along the way.

But before everyone else zips on by along Route 22, it’s worth mentioning the bacon.

“Bacon was special,” said Megan O’Malley, chief of interpretation, as she showed off a barrel of fake bacon installed last fall in the park’s visitor center. The staff figured what better way to make the story of a transportation system more compelling than to explain what was in it for regular folks.

A model of the “Lou Ann” sits on the rail cars in a display case at the Portage Museum. (Darrell Sapp/Post-Gazette)

A model of one of the canal boats ,in a display case at the Portage Museum. (Darrell Sapp/Post-Gazette)

Ranger Doug Bosley uses a display while talking about the elevation and how 10 engine houses were used to get cargo over the Allegheny Mountains, in the Portage Museum. In the forground are some of barrels that would have been used to ship. (Darrell Sapp/Post-Gazette)

Doug Bosley stands near a model of a “Safety Car”, that was used to “brake” when ropes would break at the Allegheny Portage Railroad. (Darrell Sapp/Post-Gazette)

A casting of “bacon” on display in a shipping barrel at the Portage Museum. Bacon was a very popular item to be shipped over the Allegheny Mountains to Pittsburgh. (Darrell Sapp/Post-Gazette)

More than 23 million pounds of bacon was shipped on the Allegheny Portage Railroad east from Pittsburgh in 1843 alone.

Back then, bacon came in barrels. The railroad also carried cheese, whiskey, nails, tobacco, yarn, lead, even fancy goblets that likely would have been broken if they’d been packed into a wagon pulled by horses. Passengers rode the railroad, too.

The goods were in demand but the profit margin wasn’t high. It was a similar challenge to the ones that Amazon, Uber, Postmates, Macy’s and FedEx deal with as they try to satisfy consumers’ interest in getting things delivered quickly — and still make a profit on the exchange.

An engineer working on the portage railroad construction in the early 1830s predicted that, when it was complete, transporting goods by canal and railroad from Hollidaysburg in Blair County to Blairsville in Indiana County would drop shipping costs from $12 to $16 per ton to $4 per ton, according to “Over the Alleghenies,” a 2013 book on Pennsylvania’s early canals and railroads by Robert Kapsch, published by West Virginia University Press.

Another game changer: rather than a 23-day wagon trip from Philadelphia to Pittsburgh in good weather, according to park literature, the new system could do it in four days.

In the early 1800s, New York had shocked the markets with its Erie Canal, a more than 360-mile-long system of manmade waterways that could get people and goods from Albany to Buffalo in five days, by some estimates.

Pennsylvania’s response was a complicated transportation system that was part canal, part traditional railroad and — because those mountains had to be crossed somehow — part portage railroad.

The 36.69-mile-long Allegheny Portage Railroad was only a link in the project that stretched across hundreds of miles of Pennsylvania, but it was arguably the most creative piece.

The engineers decided they could get loads up and over the mountains by constructing a series of tilted stretches of rail — like the inclines that still take commuters and tourists up Mount Washington in Pittsburgh.

Ten inclines were built, with flat stretches in between, to serve as a link between canals in Hollidaysburg and Johnstown.

The canal and railroad system across the state would later be killed by better technology, political battles and a devastating downturn in the nation’s economy. Pennsylvania took out so much debt to build it — and all the branch canals that legislators demanded in return for their votes — that the state came close to going bankrupt, said Doug Bosley, park ranger at the Allegheny Portage Railroad historic site.

But don’t call it a failure. Many merchants did well because the system opened up access to more markets. Jobs were created, as the politicians like to say. “Pretty much everyone benefited except the state government,” said Mr. Bosley.

Hemp Rope and Wire Rope, both were used at the Allegheny Portage Railroad. (Darrell Sapp/Post-Gazette)

The Gears in the replica of Engine House #6 , which was the high point of the Allegheny Portage Railroad. Two steam engines were used in each of the Engine Houses. The hemp ropes were replaced later with wire ropes , created by John Roebling. (Darrell Sapp/Post-Gazette)

The first year, horses pulled the loaded cars along the Allegheny Portage Railroad because the state couldn’t afford locomotives. The animals were leased from nearby farmers, and it’s fair to say they weren’t real happy when locomotives were eventually acquired, Mr. Bosley said.

Technology that both kills and creates jobs didn’t start with the Internet. In some ways, the portage railroad served as sort of a high-tech accelerator for the 1830s and 1840s.

At the top of each inclined stretch of rail, coal-powered stationary steam engines did the hard lifting and lowering work. Sometimes those got overheated and blew up.

Hemp rope — several inches thick and each piece around a mile long — pulled loaded railcars up the inclines while lowering other railcars down. The year it launched, the system ordered 12 ropes covering a total of 11 miles and 778 yards, and weighing 118,649 pounds, according to Mr. Kapsch.

The heavy rope spent a considerable amount of time out in the weather, since only the part of the incline with the steam engines was enclosed in a building. The ropes broke sometimes — in some cases triggering accidents that killed people.

When John Roebling, a German-born engineer who helped found the community of Saxonburg in Butler County, created a “wire rope” like some he’d read about in Europe, a technological showdown ensued.

The state said Mr. Roebling could test his new product. He just had to pay for the test. If it worked, the state would pay for the wire rope and buy more.

Mr. Roebling, according to Mr. Bosley, chose Incline No. 3. It was the shortest, of course.

Some stories say the wire rope failed that first time because someone tampered with it — presumably someone involved in selling, making or repairing hemp rope. Mr. Bosley has not seen documentation to back that story up.

In the end, Mr. Roebling built a good business selling wire rope to the railroad. That same type of material is still used today to lift elevators and on suspension bridges like one Mr. Roebling built across the Monongahela River at Smithfield Street. That bridge was later replaced.

The Allegheny Portage Railroad visitor center is just off the Gallitzin exit on Route 22, but the park’s Staple Bend Tunnel — the first railroad tunnel built in the U.S. — is a half-hour drive back toward Pittsburgh, near Mineral Point and about five miles from Johnstown.

That’s what happens when a 36-mile-long railroad is turned into an historic site.

These days parts of the original line serve as roads driven by motorists thinking about getting to work on time rather than about bacon, cheese or whiskey.

The railroad tunnel, which was dug at the blistering rate of 18 inches a day, draws day hikers. On “ghost tours” in the fall, the park rangers tell about the load of bacon blown up when the whiskey caught fire and about the people killed trying to squeeze up to the walls in the tight tunnel when a train went by.

Massive “stone sleepers” that once formed the base of the rail tracks can still be found in neat, grass-filled rows embedded in the trail near the tunnel. They were modeled after those used in England.

In what was not so much a technological battle as an issue of resources, the engineers began to turn away from such stone and use more wood — a plentiful resource in the brave, new country.

The stone work on the “Lemon House “ near Engine House #6 , of the Allegheny Portage Railroad. It was where people could have a meal and a break from their journey. (Darrell Sapp/Post-Gazette)

A replica of Engine House #6 , which was the high point of the Portage Railroad. Two steam engines were used in each of the Engine Houses. Cast Iron was layed on the wood beams for the rails. (Darrell Sapp/Post-Gazette)

A wooden full scale model of a steam engine is on display at the Portage Museum. It was built in the late 1800s. (Darrell Sapp/Post-Gazette)

Part of the dining area of the “Lemon House “ near Engine House #6 , of the Allegheny Portage Railroad. It was where people could have a meal and a break from their journey. (Darrell Sapp/Post-Gazette)

‘A plunderer from Pennsylvania’

The Panic of 1837 was a bit like the Great Recession or the Great Depression, in that it sent shockwaves through the economy.

As Mr. Kapsch described it in his book, the federal government became concerned about a speculative bubble that developed in the U.S. as a result of the buying up of land without solid financing. As a result of various factors, more than 600 American banks failed in 1837.

After the downturn, Mr. Kapsch wrote, Pennsylvania struggled to deal with a financial mess that was not helped by rising interest payments on debt taken out to fund the canal and railroad system, as well as high repair costs, slowing toll revenues and a general unwillingness to raise taxes.

In July 1842, the state defaulted on its bonds.

Creditors, many of them from England, were not happy. The English minister Sydney Smith took a distinctive dislike to those from the Keystone state, according to Mr. Kapsch.

“How such a man can set himself down at an English table without feeling that he owes two or three pounds to every man in company I am at a loss to conceive: he has no more right to eat with clean men. If he has a particle of honor in his composition, he should shut himself up and say, ‘I cannot mingle with you. I belong to a degraded people — I must hide myself — I am a plunderer from Pennsylvania.’ ”

The state began making payments again in 1845 but Pennsylvanians wanted out of the transportation business. In 1857, the Main Line was sold to the Pennsylvania Railroad Co. for $7.5 million, far less than it cost to build.

“Within a year,” Mr. Kapsch wrote, “anything of value was either sold or stripped from the Allegheny Portage Railroad.”