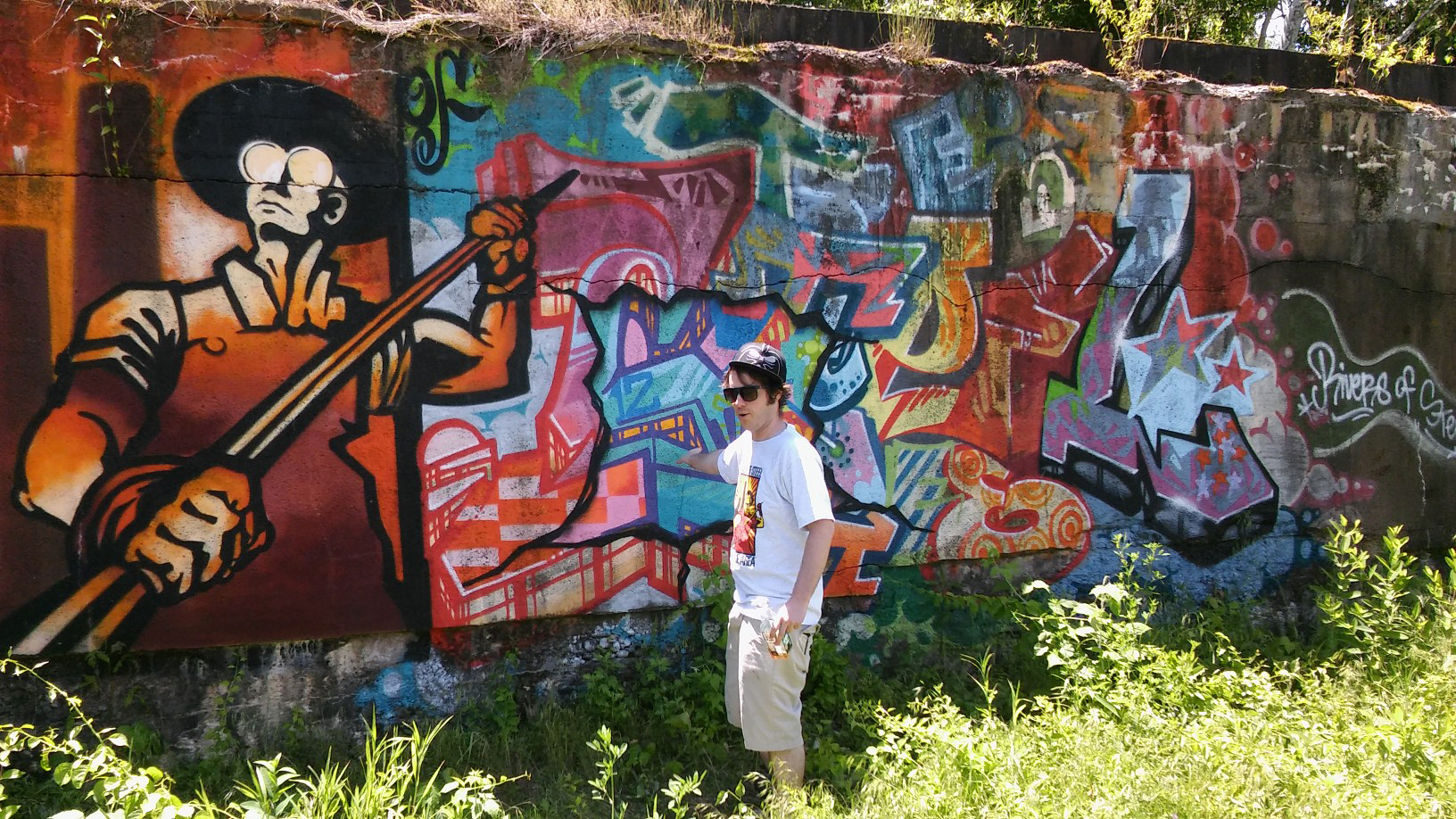 Graffiti would be bubble-lettered bad on the Grand Canyon’s vermilion walls. And a 40-foot-tall deer head fashioned out of scavenged rebar, wire and cracked rubber hoses would be out of place perched on Half Dome in Yosemite.

But at the Carrie Furnaces, rusty, remnants poking out of the region’s not-so-long-ago industrial heyday along the Monongahela River, the colorful, spray-painted “tags” and the twisted metal stag, work. And they are welcomed.

That’s because the Homestead-based nonprofit that manages the Rivers of Steel National Heritage Area, which includes Carrie Furnaces 6 and 7 and several other iconic metals manufacturing sites in eight southwestern Pennsylvania counties, is taking an inclusive path to preserving the region’s internationally significant industrial history, while acknowledging its post-industrial present.

That’s why Rivers of Steel is working to stabilize the massive stag head sculpture, “guerrilla art” created in 1997-98 by a cadre of artists who illegally sneaked into the fenced property on weekends. And it’s why the organization has hired an urban arts director to monitor and direct graffiti away from the landmark iron furnaces and instead onto designated, non-historic structures.

“Our core mission is to tell the story of iron and steel in the region, and if something tries to interfere with those historic structures or interpretation, we don’t let that happen,” said Ron Baraff, a public historian who is director of historic resources and facilities at Rivers of Steel. “But the urban art that’s here enhances the site and enhances the experience, and does true justice to the history of the site, which doesn’t end in 1978.”

That was the year the Carrie iron furnaces — which were part of the historic Homestead Works steel mill complex that produced as much as 1,000 tons of iron a day — were shut down by the U.S. Steel Co. The Carrie name came from a female relative of the original owners.

“The iron that was made at Carrie and turned into steel at Homestead built the Empire State Building, the Panama Canal and the U.S.S. Missouri battleship,” Mr. Baraff said, during a recent walk around the 35-acre site that straddles the Swissvale-Rankin border. “It’s not hyperbole to say that the iron from this facility built 20th century America. Its steelworkers built the middle class. It’s an incredible legacy.”

It’s the kind of legacy that is central to the National Heritage Areas Program, established by Congress in 1984 to foster community stewardship and preserve sites that tell historically important American stories, while generating economic benefits for local communities.

The Rivers of Steel Museum is located in the Bost Building, 623 E. Eighth Ave., Homestead.

Carrie Furnaces are on Carrie Furnace Boulevard in Rankin. The Pump House building, site of the deadly 1892 battle between steelworkers and Pinkerton detective agents and now an exhibit space, is located in the Waterfront at 880 E. Waterfront Drive, Munhall.

National Heritage Areas are administered by the National Park Service but are not park service units. Instead, the park service supports heritage preservation, tourism and educational activities by providing technical assistance, planning advice and matching funding for locally driven preservation.

In 1996, Rivers of Steel was designated a National Heritage Area, one of six in Pennsylvania and 49 nationwide.

In addition to the Carrie Furnaces — which were designated a National Historic Landmark in 2006 — the nonprofit also manages:

“We couldn’t save everything, but we were fortunate to save some stuff, and we’re trying to make sure that the stories never get lost,” said Augie Carlino, president and CEO of Rivers of Steel. “Collectively, what the whole region contributed to the growth of the U.S. and the world is immense. It’s internationally significant.”

While steel’s stories are important and central to the region’s industrial history, Mr. Carlino said they are only part of a much broader, resilient and diverse heritage that included riverboat building, pottery and glass production, timbering, and coal and iron mining.

“This region has been part of the nation’s big historical stories, and has shown amazing resilience,” he said. “The Pittsburgh region was the Silicon Valley of the early 1900s. We had a high-tech metals industry, access to labor and resources. We had people of color and ethnicity. And then we transitioned to a different phase, becoming a leader in robotics and medical science.

“That’s our history. Steel was just a snapshot in time.”

That inclusive perspective, charted two decades ago by Mr. Carlino, is one that dovetails well with a new, more diverse, “urban agenda” the National Park Service is promoting in this, its centennial year.

“The agenda places new emphasis on promoting sites that are closer geographically and culturally to the nation’s urban population centers,” Mr. Carlino said. “So guess what? We were doing this stuff anyway, so we’re part of the historic urban agenda now.”

“It helps us because we are always looking for ways to use history and heritage as a rebuilding tool in this 21st century economy where many of our communities are still struggling for footing.”

Many of the 40,000 annual visitors to the Carrie Furnaces go to view the stag head and the graffiti as much as the furnaces, reinforcing the notion that the 38 years that have elapsed since the plant’s closing, didn’t alter its industrial legacy so much as add to it.

The iron works evolved from a workplace to a reclamation site, to an urban playground, frequented by scavengers, vandals, partiers, graffiti writers and artists, and its heritage is that whole history, said Shane Pilster, a graffiti artist, graphic designer and Rivers of Steel’s urban arts coordinator.

These sites that preserve our industrial past stretch from Oil City to the Schuylkill River.

In addition to Rivers of Steel, other National Heritage Areas located in whole or in part in Pennsylvania, include:

“There’s a huge history to this place, but what happened when that history ended?” said Mr. Pilster. “It was abandoned to ‘urban explorers,’ the graffiti writers, photographers and artists. What they left behind is bringing in a whole different group of people who are looking not at the industrial history but the post-industrial users. It’s the reason the stag’s head is still standing on the pump house.”

So are the “tags,” which can be likened to graffiti on steroids, written large and spray-painted in intricate patterns and vibrant colors, on the interior walls of a storage building and, most conspicuously, on a 12-foot-tall, 900-foot-long crane wall that separates the iron furnaces from the Monongahela River. Many of those tags were done by graffiti artists, famous in the genre, invited by Mr. Pilster from Baltimore, Cleveland, Seattle, Chicago and Australia.

Mr. Pilster, 34, a native of the San Francisco area who tagged there and was arrested shortly after coming to Pittsburgh for tagging a Shadyside building, first became interested in the Carrie Furnaces site five years ago while on one of the Rivers of Steel tours.

“There were tags all the way up the smokestack,” Mr. Pilster said. “It was surreal. I talked to Ron [Baraff] about it, and about what’s being preserved and where we can paint. I had a list of places and he crossed off most of them.

“But now there’s legal places to tag, on the wall, in the power house, where people don’t have to break in anymore. Where you can take your time and create something beautiful in 40-color quality, that’s part of the site,” said Mr. Pilster, who created the Rivers of Steel logo featuring a steelworker at a blast furnace. It’s painted on the crane wall.

Allowing graffiti on designated, “non-contributing” sites and buildings near Carrie’s No. 6 and No. 7 furnaces, has been largely successful. Mr. Pilster said only about 15 tags have occurred in non-permitted areas in the last four years, a number that previously occurred every month.

“We want to talk about that industrial story and the individual stories of the men and women who worked here, but we also want to manage it as a post-industrial site,” he said.

Another way to do that is to highlight how nature is coming back and reacting to the built environment at Carrie, where Rivers of Steel, in partnership with Penn State, has established the “Iron Garden” tour, a walking route through the property marked by 10 iron panels cast by a small on-site foundry, to highlight the industrial site’s re-greening.

“We partner with the gardeners, who talk to visitors about the successional growth of flora and fauna, while we talk about what happened when the furnaces were working,” Mr. Baraff said. “It’s all an incredible legacy and if we’re doing our job right, it won’t be forgotten.”