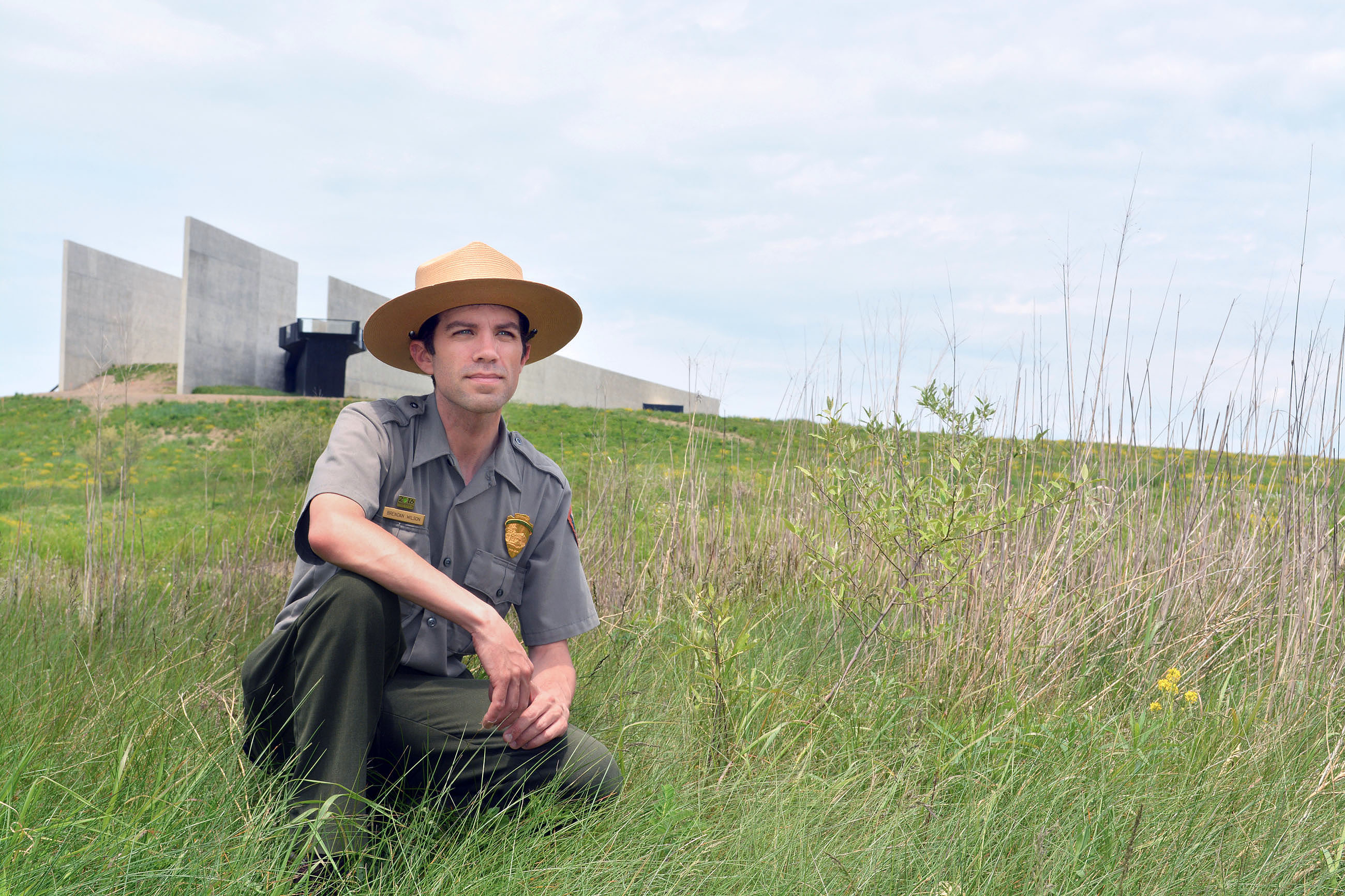 Nature’s beauty and grandeur promote healing. No big revelation there. The Flight 93 National Memorial here in Somerset County was designed for that very purpose: to tell the story of heroism in a healing atmosphere of trees, wildflowers and inspired architecture.

But that idea recently got an unexpected boost when a park ranger’s research revealed that at least a third of the 33 passengers on Flight 93 shared a notable level of interest in nature and national parks — a spot-on revelation on the 100th anniversary of the National Park Service.

Already, the 2,200-acre national memorial near Shanksville features thousands of newly planted trees and fields of wildflowers, which augment the site’s sweeping trail and majestically sculpted walls. It generates a prevailing sense of reverence — a certain spirituality about the place — that’s destined to grow bolder as the trees and flowers mature.

But Brendan Wilson, lead park ranger for interpretation at the Flight 93 National Memorial, added a new level of poignancy to that concept by documenting the link between the memorial and the memorialized. At least 11 passengers had occupations or well-established interest in conservation and environmental protection, with many making regular visits to national parks.

The national park honors victims of the Flight 93 plane crash Sept. 11, 2001. Heroic passengers succeeded in bringing down the plane hijacked by terrorists before it could reach and crash in Washington, D.C. The Memorial Plaza is a place for quiet reflection and expressions of respect.

“The story of the memorial site is the story of the totality of these people’s lives,” Mr. Wilson said, noting that a key goal at the memorial is “healing this land from its many times of turmoil,” including strip mining and the plane crash, all in keeping with the memorial’s motto: “A common field one day. A field of honor forever.”

“Looking at who these people were represents a very fitting tribute to the walking trails, the wildflower meadow and the trees that provide the solace of nature and renewal of their final resting place,” Mr. Wilson said. “That in turn provides a solace and renewal for people who visit here.”

The fortuitous link between passengers and their interest in nature adds meaning to the memorial.

“There were many things the passengers were passionate about and advocated for, and through the memorial, their passions, their work and the things they loved in their lives — hiking, trees, the environment — can continue on,” he said.

The horror of Flight 93 — crashing upside down at 563 mph into a reclaimed strip mine — was buffered only by revelation that the 33 passengers and seven crew members helped down the plane, preventing the four al-Qaeda terrorists from crashing it 20 minutes later in Washington, D.C. most likely into the U.S. Capitol.

As with the rescue efforts of New York City police and firefighters, United Flight 93 heroism helped inspire and unify a stricken nation during the fitful aftermath of the 9/11 terrorist attacks on the World Trade Center and Pentagon.

So that idea of unimaginable loss of life and destruction leading to unity and renewal became a theme the Flight 93 National Memorial hoped to capture. As such, the memorial has risen from a site full of mine-damaged soil, crash debris and ashes to become a memorial site whose history is told in inspired detail.

“Talk about the Phoenix rising. What was a tragic hole in the ground with trees charred and in every way symbolic of the tragedy of that day is now a scene of nature with historical impact, with the beauty of art, architecture and design blending so perfectly with everything else,” said Lori Guadagno, 56, of Jacksonville Beach, Fla., who is the sister of Flight 93 passenger Richard J. Guadagno.

“All is tied in to make sense,” she said. “The aspects come together to create something lasting for every visitor coming to the site, with all components coming together. That marriage of the two makes this site so profound.”

Ms. Guadagno’s late brother, 38 when the crash occurred, represents the perfect example of passengers’ interest in and commitment to nature.

To honor the legacy of the Flight 93 passengers, Brendan Wilson, lead park ranger for interpretation at the Flight 93 National Memorial, compiled a list of quotes from oral histories and Jere Longman’s book, “Among the Heroes,” regarding passengers’ interest in, love of, and respect for nature.

Here is a sampling:

He served as manager of the U.S. Fish & Wildlife Service’s Humboldt Bay National Wildlife Refuge near Loleta, Calif., where the visitor center now is named in his honor. That Northern California refuge also involved natural restoration similar in many respects to what’s occurring at the Flight 93 National Memorial.

“It was a working, functioning refuge but it was definitely neglected,” his sister said. “The amazing thing about the refuge is that it’s an estuary in one of the most beautiful places on the West Coast, and it is amazing to me that a place of that grandeur would have gone by the wayside.

“By the time he arrived there, he noticed a diamond in the rough and was absolutely committed to bringing it back to full potential, and he started doing that the first day he landed there,” Ms. Guadagno said of her brother.

Others linked with nature

• Christine Ann Snyder was a certified arborist with The Outward Circle, a statewide environmental group in Hawaii dedicated to protecting Hawaii’s “rare natural beauty for future generations through community improvement, public education and advocacy.” Her picture at the memorial shows her hugging a tree.

She was returning to Hawaii after attending a New York conference on woodland conservation. During her memorial service, cuttings of plumeria trees, a flowering tropical tree, were handed out.

• Alan Anthony Beaven, a skilled environmental lawyer specializing in the Clean Water Act, actually had filed suit against the National Park Service on claims the service was cleaning up streams inside Yosemite National Park too slowly. U.S. Sen. Barbara Boxer, D-California, read a tribute to Mr. Beaven into the Congressional Record after the crash to celebrate his success in prosecuting Clear Water Act cases.

• William Joseph Cashman and Patrick Joseph Driscoll were traveling together on Flight 93 to Yosemite to meet a mutual friend and his son, who already were there and awaiting their arrival. The friends figured initially that the 9/11 attack would delay their arrival only to learn the worst. The two ill-fated passengers had been regular visitors to national parks, with photographs of them poised on cliffside trails in the Grand Tetons and against landscapes at Yosemite and other parks.

• Lauren C. Grandcolas enjoyed spending time hiking in the Golden Gate National Recreation Area near San Francisco and the nearby Mount Tamalpais State Park. To honor her interest in nature, a memorial garden was constructed and dedicated in her name in Market Square Park in Houston.

• Donald F. Greene was taking Flight 93 to Lake Tahoe to spend time hiking there with his brother.

• Toshiya Kuge from Japan was visiting graduate schools in the United States and Canada and spending time just days before the crash whitewater rafting in the Jasper National Park in the Canadian Rockies.

• Donald A. Peterson and his wife Jean Hoadley Peterson never made it to their destination that day — a vacation in Yosemite.

Jere Longman, author of “Among the Heroes,” first published in 2002, found various connections among the passengers — generally successful careers, noted abilities in calmly dealing with crises and their training in self defense. Mr. Guadagno, for example, was trained in self-defense and restraint as a federal law enforcement agent and could bench-press twice his weight.

“It seems uncanny that other interconnections only now are being uncovered,” said Mr. Longman, a New York Times sports reporter. “And it is fascinating that there is connectiveness I had no idea about.”

He described the passengers as “a remarkable group of people,” adding that “It’s interesting that these tendrils keep connecting the passengers 15 years out.”