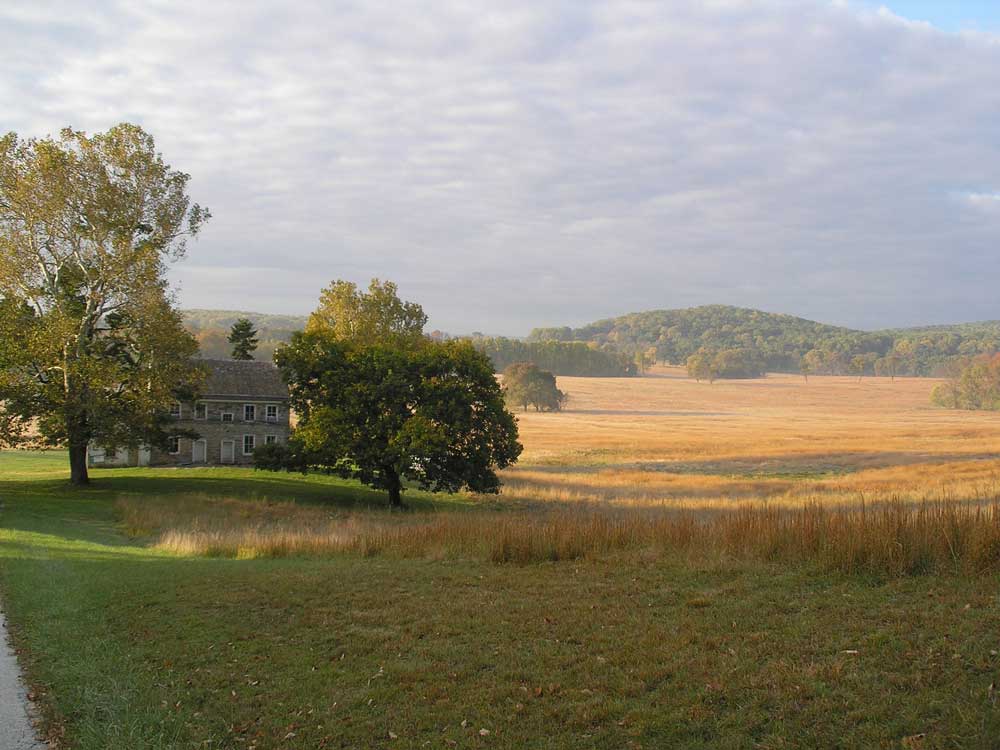 George Washington selected Valley Forge for the exhausted Continental Army’s third winter encampment during the Revolutionary War because of the site’s proximity to Philadelphia and its grand natural features.

Mount Joy, the Schuykill River and an open slope topped with earthworks defenses formed a protective triangle around broad fields and confounding hills where the wet, cold, hungry men could shelter and be trained as 1777 turned to 1778.

Still, it is not grand vistas, but small things — a button, a book, a four-dollar note — in the collection at Valley Forge National Historical Park that best reflect the principal achievement of that notoriously hard season: From disparate parts, an army and nation, united.

Take, for example, the button.

Excavated at Valley Forge during a dig sponsored by the company that makes Log Cabin syrup, the cast pewter button from a Continental soldier’s coat bears the entwined letters USA, with the S embracing the rim of the U and the leg of the A.

A reconstructed hut where General Muhlenberg’s brigade was quartered during the 1777 winter encampment at Valley Forge. (Credit: Kelley Wagers)

The reconstructed Muhlenberg huts are similar to more than a thousand huts built by the Continental Army on the grounds of the Valley Forge encampment. (Laura Legere / Post-Gazette)

The artillery park at Valley Forge is where most of the canons were kept during the winter encampment. (Laura Legere / Post-Gazette)

It was at Valley Forge that rebel soldiers began to get uniforms from the United States government instead of from their individual states, park archivist Dona McDermott explained. So a soldier who might once have looked at his fellow fighter’s chest and seen the mark of New York or Pennsylvania would now see the same USA button on his coat and his comrade’s.

“It’s a reminder every day that you are now not a Virginian, not a Pennsylvanian, not a Delawarean. You are now a member of the United States,” Ms. McDermott said, pointing to the nickel-sized button in a display case at the visitor’s center at the park. “You know exactly what you belong to.”

That founding principle — from many, one — recurs in the park’s collections, whose items are on view in the park’s exhibits or kept in locked vaults that are opened to researchers.

The holdings come primarily from three sources: archeological digs, the John F. Reed collection of 18th century documents and the George C. Neumann collection of military artifacts. They include an astonishing arsenal of guns, swords, pole-arms and powder horns as well as various items of the day like leather breeches, shaving tools, wallets and a scarlet sash that was worn as an officer’s uniform accessory and doubled as a hammock for carrying a wounded soldier off the battlefield.

“There are all kinds of little tchotchke things that people don’t think about,” Ms. McDermott said. “We think about muskets. We think about rifles, swords. We don’t necessarily think about curling irons.”

The collection includes paper money printed by the states as well as the new uniform Continental Currency authorized by Congress in May 1775 that created an alternative to English pounds and shillings and could be exchanged across colony lines.

The “United Colonies” money came in denominations like two-thirds of a dollar and was sometimes difficult to use with merchants who preferred the more certain value of hard British currency. But it made a point about togetherness: The design on one weathered bill in Valley Forge’s collection that was printed in 1776 depicts the colonies as 13 conjoined rings circling a sunburst that reads, “We are one.”

The park’s collection also includes items that illustrate the tenuousness of the bond that was strained in the miserable conditions at the encampment.

Back of a three-dollar bill in Continental Currency printed in 1777, from the John F. Reed collection, Valley Forge National Historical Park.

Back of a six-shillings bill in New Jersey currency printed in 1776, from the John F. Reed collection, Valley Forge National Historical Park.

Ms. McDermott lifted a clear box in the collection’s vault to reveal the most famous item in the park’s trove: a letter from Gen. Washington to the president of the Continental Congress in late December 1777, warning about the dire condition of the army, which lacked food, supplies and adequate clothing.

“I am now convinced, beyond a doubt,” he wrote, “that unless some great and capital change suddenly takes place in that line, this Army must inevitably be reduced to one or other of these three things. Starve, dissolve, or disperse, in order to obtain subsistence in the best manner they can.”

Washington was prescient: by late February the force of 12,000 men that had marched into Valley Forge two months earlier was reduced through death, disease, attrition and desertion to 6,000 men in fighting condition with 2,000 more in the hospital.

The winter encampment itself was, as one park placard puts it, “a stew pot of languages, regional identities and motivations.” Soldiers in the Continental Army came from every state or were foreign-born. Their officers were guided by different rule books — military manuals of arms written in French or German that they brought from their home countries or bought from their local book seller.

So Washington instructed Baron Friedrich Wilhelm von Steuben — a Prussian who came to America with military training, an Italian greyhound named Azor and a penchant for swearing — to devise a standard method for the army’s drills and maneuvers to train the men at Valley Forge.

Steuben’s techniques were successful. He is credited with unifying a fighting force of 15,000 that marched out of Valley Forge toward Monmouth Courthouse, N.J., in June 1778 and battled the better-prepared British to a draw.

Steuben’s military manual was first formally printed in 1779 and was used by the U.S. Army until 1814. Ms. McDermott gently paged through Valley Forge’s restored first edition of the book, which includes tiny illustrations of men on horseback to demonstrate proper positioning on the field.

Valley Forge’s collection also demonstrates that the encampment’s history was not just recorded by great men and it wasn’t just written on paper.

A prized item in the collection is a powder horn engraved by a teenage soldier from Connecticut named Jabez Rockwell who had lost his horn on the way to Valley Forge. He was one of just a handful of soldiers at the camp to receive a replacement horn from the few cattle slaughtered that winter for the army’s meat.

“Jabez won the lottery for the horn,” Ms. McDermott said. “For him, this was like a million dollars.”

He inscribed his name, hometown and “His horn” into the container, as well as the first name in a list of important sites in his army career where the horn kept his powder dry: Valley Forge.

It is not the loveliest powder horn of the dozens in the collection, which includes professionally engraved pieces from different centuries and regions depicting deer, fish, forts, masted ships, palm trees, even a tiny dripping still. But it is the archivist’s favorite.

Jabez Rockwell went on to fight at the battles of Monmouth and Yorktown. A century later his grandson donated the horn to Valley Forge where it tells its story succinctly but with particular elegance.

“I love this horn because it was here at Valley Forge,” Ms. McDermott said. “It was part of the food. This cow fed the army.”