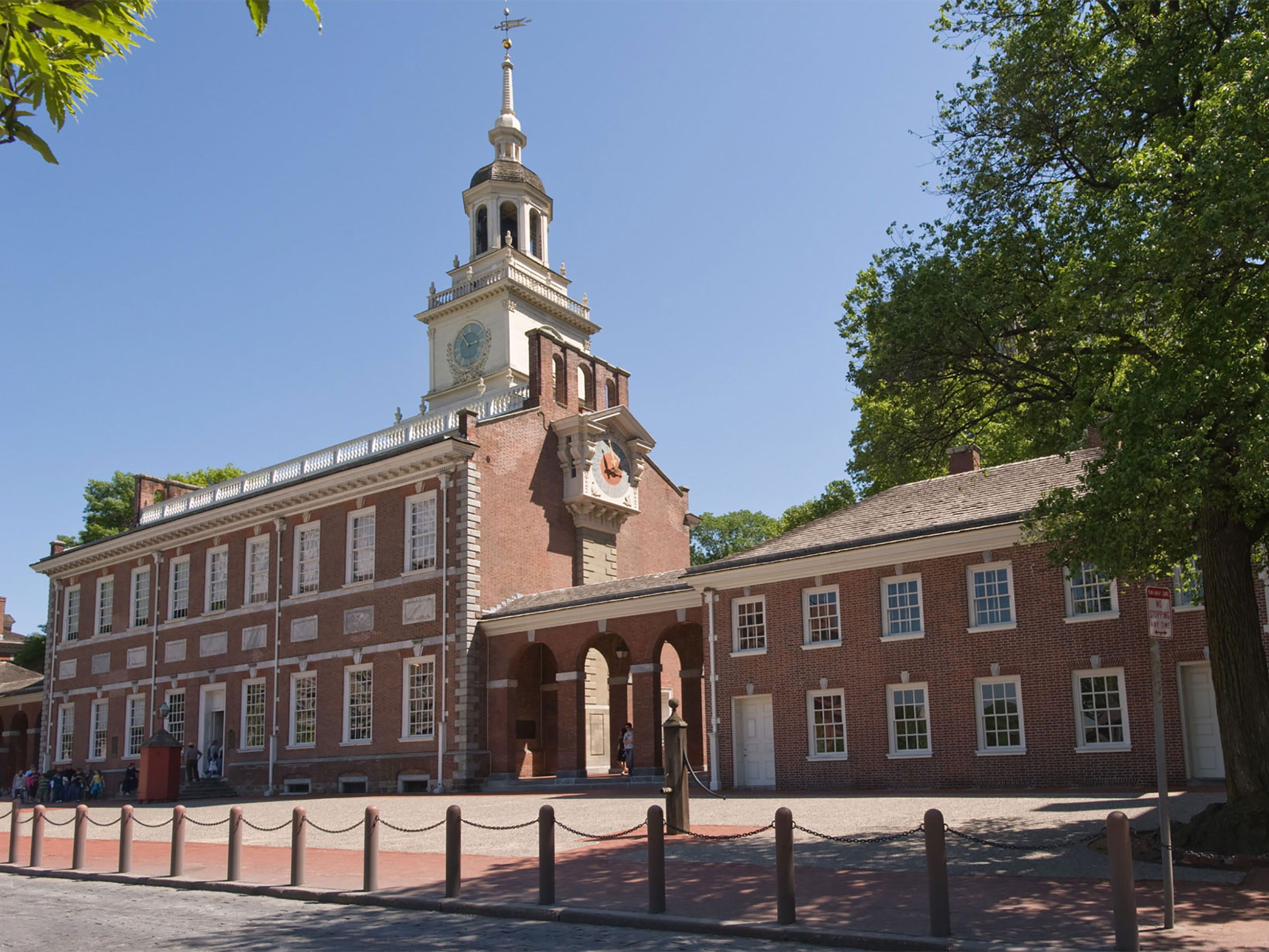 Independence Hall, the Philadelphia site where the Declaration of Independence and the U.S. Constitution were debated and signed, was built to house the Pennsylvania legislature.

Most Americans are probably familiar with famous quotations that have helped to define the American way of life, even if they don’t know where the quotes came from.

They remember phrases like “all men are created equal,” “life, liberty and the pursuit of happiness,” “we the people of the United States” and “to form a more perfect union,” phrases authored by Thomas Jefferson and first proclaimed in the Assembly Room of Philadelphia’s Independence Hall.

But Americans don’t know how close they came to reciting passages from another document written by the same “founder” and first read in the same room:

“We beg leave further to assure your Majesty that … our breasts retain too tender a regard for the kingdom from which we derive our origin to request such a reconciliation as might in any manner be inconsistent with her dignity or her welfare.”

Now recognized as? mixed signals from a fledgling government, the Olive Branch Petition was a proclamation of loyalty to King George III and a plea for peace. It was originally authored by firebrand Jefferson and later edited and adopted in Independence Hall by the Second Continental Congress on July 5, 1775. A week earlier Congress had authorized the invasion of British Canada. A day later it issued a declaration explaining to the king why colonists had taken up arms against him.

Independence Hall is commonly recognized as a place of revolutionary zeal where great men worked toward a common goal that literally changed the world. But in the 18th century, Independence Hall was a political sausage-making factory where ideas, loyalties, opportunities and contradictory opinions were mashed into a meatgrinder. What came out — the political structures that now define American freedoms and responsibilities — was hardly inevitable or achieved through some grand agreement.

So last weekend when Albert Grazier of Wilkes-Barre tried to tell his granddaughter, Ella, 7, why Independence Hall was worth visiting, he had trouble explaining it in a way she could understand.

“I thought this would be easier,” he said, on a sidewalk outside. “You could say it’s important because it’s where Americans proclaimed their freedom, but it’s also where British subjects stood up to defend their king and argued against the Revolutionary War.”

“At her age, I guess it’s best to just say the building was an important place where people met to form the United States,” Mr. Grasier said.

Today, Independence Hall is the centerpiece of Independence National Historical Park, 1-square mile of American history administered by the National Park Service and included on the United Nations’ list of World Heritage Sites. With exteriors restored to resemble, if not replicate, their 18th century roots, the urban park is a cluster of historically significant landmarks well worth a stroll through its streets whether or not you can recite patriotic passages.

All Independence National Historical Park sites are free, although a few are open by appointment only. Here’s a look at a few.

The Assembly Room at Independence Hall is among the most important locations in the United States. In this room in 1776 the Continental Congress declared independence from Britain, and in 1787 the U.S. Constitution was debated and signed. (Source: NPS)

With all its nation-building heritage, it’s often forgotten that the structure was built to house the province of Pennsylvania’s legislature and was called the Pennsylvania State House, serving all branches of state government until 1799. Following heated arguments about the building’s design, the red-brick Georgian edifice was constructed piecemeal from 1732 to 1751 as funding became available. It is symmetrical and proportional in the common style of the day. Its distinctive clock was added to the steeple in 1753.

Children are taught that in the Hall’s Assembly Room, the Continental Congress declared independence from Britain and adopted the U.S. Constitution. But that’s not the whole story.

The park includes 30 non-contiguous sites spread over 1 mile of Philadelphia. Entry is free to all sites, but each has its own seasonal admission hours and some are open for tour groups only or by appointment. Get details on all of the park sites at the Independence Visitor Center.

By 1787, delegates from the independent states realized the nation’s first government under the Articles of Confederation lacked the central control needed to conduct the people’s business. They told constituents and newspapers they would meet at Independence Hall for a series of commercial conferences. Instead, delegates took an oath of secrecy, locked the doors, closed the drapes and without public vote abandoned the Articles of Confederation and wrote, debated and adopted the Constitution of the United States, in which the states are subservient to the central control of the federal government.

The crack heard ’round the world is actually the result of a botched repair job. The original State House bell, forged in England, cracked on its first ringing. Philadelphia metal workers melted it down and forged the second bell, which rang in the State House steeple until 1846. It’s not clear what originally caused the crack, but in trying to fix it workers widened the break that curves upward through the bell’s Old Testament inscription, “Proclaim liberty throughout all the land unto all the inhabitants thereof.” Those words inspired abolitionists, who called it the Liberty Bell. A hundred years later, suffragettes and leaders of the civil rights movement embraced the bell and its message.

The building next door to Independence Hall was the temporary capital of the United States and seat of Congress from 1790 to 1800. Its rather plain main chamber was big enough to accommodate 106 representatives from the first 16 states. Congress Hall was the site where the nation’s first presidents, George Washington and John Adams, were inaugurated and the Bill of Rights was ratified.

In the building that housed the U.S. War Department during the 1790s, exhibits now spotlight the history of the young nation’s Continental Army, Navy and Marines. Visitors explore a diorama and a memorial to Marine Corps veterans who were killed in World War II, Korea and Vietnam.

After a half hour of exploration, Ella Grazier endorsed the exhibits of Franklin Court as “the funnest part of this whole thing.”

The complex, which opened in 1976, is located at the site of Benjamin Franklin’s print shop and where he lived from 1763 until his death in 1790. The original building was demolished by the city in 1812. Following several architectural excavations in the 1900s, the National Park Service recreated parts of the complex, painted the floor to show where walls doorways once stood and erected “ghost structures,” white wooden support beams depicting the parameters of the original building’s upper floors.

George Washington never slept here, but it would be wise to make the 50,00-square-foot Visitor Center your first stop when exploring the diverse sites of Independence National Historical Park. Unless you have a friend who can show you around, maps,guides or other resources are necessary to navigate the park’s diverse locations. Several free films and interactive exhibits can help you to get your historical bearings.