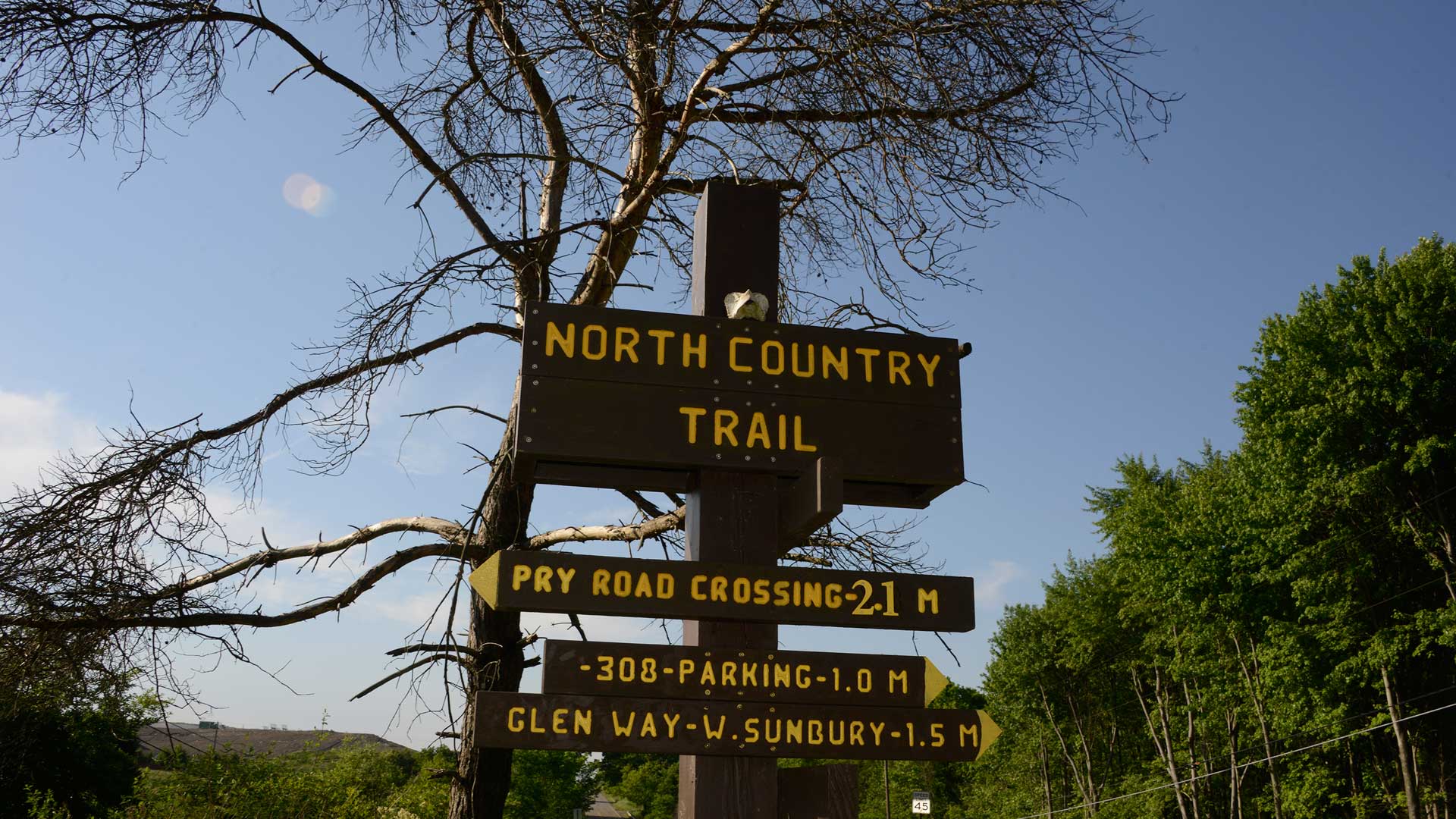 Standing at a trailhead before a hike and looking down the trail is the beginning of a story — the story of one’s journey on that trail, on top of the story of the trail itself. Those stories can be epic in the case of the North Country National Scenic Trail, which is to be the longest continuous hiking and backpacking trail in the United States, stretching 4,600 miles from New York border to North Dakota.

You might be surprised to learn that 265 miles of it twist and turn through Western Pennsylvania, dropping down from New York and curving west into Ohio just north and west of Pittsburgh, as close to Downtown as Butler and Beaver counties.

Stand on that trail, looking north, and imagine in your mind’s map it rolling, to your right, over rivers and mountains all the way to Vermont, and to your left, meandering through the forests of Michigan and Wisconsin and past Minnesota’s lakes on into prairie.

The cool, pine-scented route is marked with blue blazes and the trail’s shining yellow North Star logo. Not all of it is off-road, though the National Park Service that administers the trail hopes almost all of it will be. At the end of 2015, about 2,880 trail miles were completed — about 60 percent. The rest of the route is walkable on roads. A very few intrepid souls have through-hiked the entire length.

Meanwhile, the even harder task of building and maintaining the trail falls mostly to volunteers, such as those of the four Pennsylvania chapters of the North Country Trail Association.

Butler NCTA president Ron Rice uses a “D.R. Mower” to cut the trail for the the course as the group is trying to avoid the wet area in the wooded area along Pry Road. (Darrell Sapp/Post-Gazette)

Butler NCTA president Ron Rice “re-flags” the course as the group is trying to avoid the wet area in the wooded area along Pry Road. (Darrell Sapp/Post-Gazette)

Ed Scurry, of Franklin, Pa., carries his pruners along a narrow part of the trail through the wooded area along Pry Road. (Darrell Sapp/Post-Gazette)

Joyce Appe , of East Brady, Pa., cuts to make way for the trail through the wooded area along Pry Road. (Darrell Sapp/Post-Gazette)

Butler NCTA’s John Stehle checks a log that needs to be cut to make way for the trail through the wooded area along Pry Road. (Darrell Sapp/Post-Gazette)

The NCTA is the nonprofit that partners with the park service and U.S. Forest Service to make the trail happen, working with a mind-boggling array of governments and agencies, businesses and outdoors groups, 31 of its own chapters and individuals over those seven states. The group calls this quilt-like, collaborative community the “Red Plaid Nation.”

The trail’s National Park Service office is in Lowell, Mich.

Hiking trail-in-progress runs through seven states from New York to North Dakota and, when completed, will be the country’s longest, at some 4,600 miles, linking scenic, natural, historic and cultural areas. As of the end of 2015, 2,880 off-road miles were open for use. The 232 miles of off-road trail in Pennsylvania include nearly 100 miles in the Allegheny National Forest; sections are maintained by various chapters of the North Country Trail Association and other groups. Closer to Pittsburgh, the trail links Moraine and McConnells Mill state parks before heading through Wampum, Beaver County, into Ohio.

The North Country Trail Association (also located in Lowell, Mich.) is the best source of maps and other information.

The chapter sites have links that describe the trail in that area, trailheads, campsites and more.

Also supporting the trail in the state is the Rachel Carson Trails Conservancy and many other groups, governments and individuals, as the trail covers public parks and private land and, where the trail itself isn’t complete, public roads.

The route is marked with vertical 2-by-6-inch blue painted or plastic blazes on trees or posts facing hikers coming from both directions (except on New York’s Finger Lakes Trail section, where the blazes are white). Small blue-and-gold, 3½-inch North Country Trail emblems are placed where the trail crosses roads and other trails (along with the list of permitted trail uses).

An idea formed in the granola days of the 1960s and 1970s, when the Appalachian and Pacific Crest National Scenic Trails were established, the North Country National Scenic Trail was authorized by Congress in 1980. During the first several decades, federal and state agencies and volunteers pieced together a lot of the trail on public lands, such as the Allegheny National Forest, which has nearly 100 beautiful miles, and state parks such as McConnells Mill and Moraine, which also hold pretty, well-trod stretches as well as a few camping shelters.

“Now we’re getting to more complex private land,” says trail Superintendent Mark Weaver, who with his small staff is based in Lowell, Mich., in a storefront next door to the slightly bigger staff of the NCTA.

Unlike some supers who can walk around their NPS sites in hours, Mr. Weaver — hired as the trail’s first dedicated superintendent in 2012 — still hasn’t set eyes on most of his domain, which he knows may be decades from being done.

“It’s a strange and wonderful critter,” says NCTA executive director Bruce Matthews of the public/private partnership “fueled by the sweat equity of our citizen-steward volunteers.” He and Mr. Weaver agree that it works well, with NCTA leveraging about $5 for every federal dollar. Pennsylvania has some of the most active and organized chapters.

So many partners are working on the vast trail that it can be hard to grasp the big picture, and so earlier this year, the NCTA, which just turned 35, presented its first progress report. It summarized that in 2015, 1,095 volunteers worked 66,166 hours (worth $1.5 million, on top of nearly $400,000 spent on construction and maintenance) and built 23 miles of new trail. One of the projects highlighted was 2.7 miles of new trail and a trailhead parking lot near West Sunbury in Butler County.

About two-thirds of that crosses two private plots, and the other third is on property owned by Waste Management, which operates its Northwest Sanitary Landfill there.

Ron Rice, president of the NCTA’s Butler Chapter, first worked with the company to route trail across some of its land in 2002. It was the first section of trail on private land in the state.

The other two landowners, the Dallos brothers, also are enthusiastic about hosting the trail. “I just thought it was something I could do to help,” says Wayne Dallos, who raises beef cattle nearby, but not yet on this formerly strip-mined stretch.

Mr. Rice plans to hold a ribbon-cutting ceremony on the new trail this fall and maybe bring some more property owners into the fold.

Wayne Dallos says that if something doesn’t make him really mad, he can’t imagine kicking the trail off his property, and Mr. Rice is keen to keep landowners happy. But at this point, the agreements are written permissions that can be canceled by both parties at any time. When it comes to securing the trail on private land, “I think we’re going to eventually have to buy the easements,” Mr. Rice says, but, “It takes money that we don’t have, and we’re really not pursuing it.”

In the meantime, they have their hands full maintaining the trail. They got a lot done on the new miles last month, when the Keystone Trails Association again sponsored a work week on the NCT, but there’s always more undergrowth to battle, downed trees to cut up and blazes to paint. They’d like to add more amenities such as camping shelters or tent sites. And they always can use more volunteers. As he puts it, “The trail jobs are many but the workers are few.”

On some stretches, hikers still are few, too, so — be warned — parts of the trail can be faint and hard to follow. For a recent backpacking trip, my wife and son and I were lucky that volunteers had just mown the new trail north of the Route 308 parking lot on Wayne Dallos’ land just north of West Sunbury. We parked there, at about 2 p.m. on a recent Sunday, and took a selfie at the trail signpost. The story of my wife’s and son’s first backpacking trip lay before us — just across from the dirt-covered mountain of garbage.

But as soon as we hit the trail, we could easily forget we were so close to a landfill and on thrice strip-mined land as we hiked through wildflower-filled fields and past sparkling beaver ponds. My son was loving it. My wife asked, “Where does this trail go?” and both she and my son were a bit awed when I said, “Well, if we keep going this way, Vermont.” (In fact, federal legislation is pending that would extend the trail 40 miles into Vermont so it can connect with the Long Trail and the Appalachian National Scenic Trail.)

While a national scenic trail is meant “to provide for the conservation and enjoyment of the nationally significant scenic, historic, natural, or cultural qualities of the areas through which it passes,” it’s also meant to be accessible to big population centers such as Pittsburgh. I thought it was cool that we were only about an hour’s drive from Downtown. It didn’t seem like it.

My description of this part of the trail would include seeing a gray fox, a garter snake, numerous groundhogs, toads, a deer skull hanging from a tree, bald eagles, blue birds, many colors of wildflowers and every shade of green. We nibbled tiny wild strawberries and noted how many black raspberries and blackberries would be ripening soon.

Wild flowers in a wooded area, near Route 308 north of the Waste Management entrance, leading toward Pry Road. (Darrell Sapp/Post-Gazette)

Wild growth along the trail through the wooded area along Pry Road. (Darrell Sapp/Post-Gazette)

8-year-old Jesse Batz roasts a marshmallow at a campsite along the North Country National Scenic Trail in Butler County. The trail stretches from New York’s Vermont border all the way to North Dakota. (Bob Batz Jr./Post-Gazette)

After crossing Waste Management property, we entered State Game Lands 95, ambled through a lovely expanse of meadow and skirted pretty Glade Dam Lake (alas, there is no shore access). Then, after a short road walk on Route 308, we waded through an uphill of chest-high grass around the edge of wetlands filled with water lilies. A few times, our boots sank into muck. But much of the walk was on relatively flat, soft, wide grassy path and most pleasant.

Our experience would have been more difficult had it not been for recent trail work; a hiker coming through the week before had complained about losing the trail several times while having to bushwhack through chest-high grass. We made sure to carefully follow the blue blazes, especially while crossing open areas.

By around 6:30 p.m., we found the side trail to the Tamarack camping area, where we set up our tent on a gravel tent pad, gathered wood for the fire ring, and filtered water from a tiny but clear-running stream for dinner and breakfast. After boiling water for our dehydrated black-beans-and-rice dinner on my trusty old Svea stove, we made a fine campfire and roasted marshmallows. My wife and I toasted the day with a carton of Merlot.

Bear tracks in the vicinity reinforced my plan to hang our food bag from an overhead branch, and added some drama as the woods grew dark.

But the moon shone like a nightlight through the swaying treetops, and it wasn’t long before we all were snug in our sleeping bags and asleep.