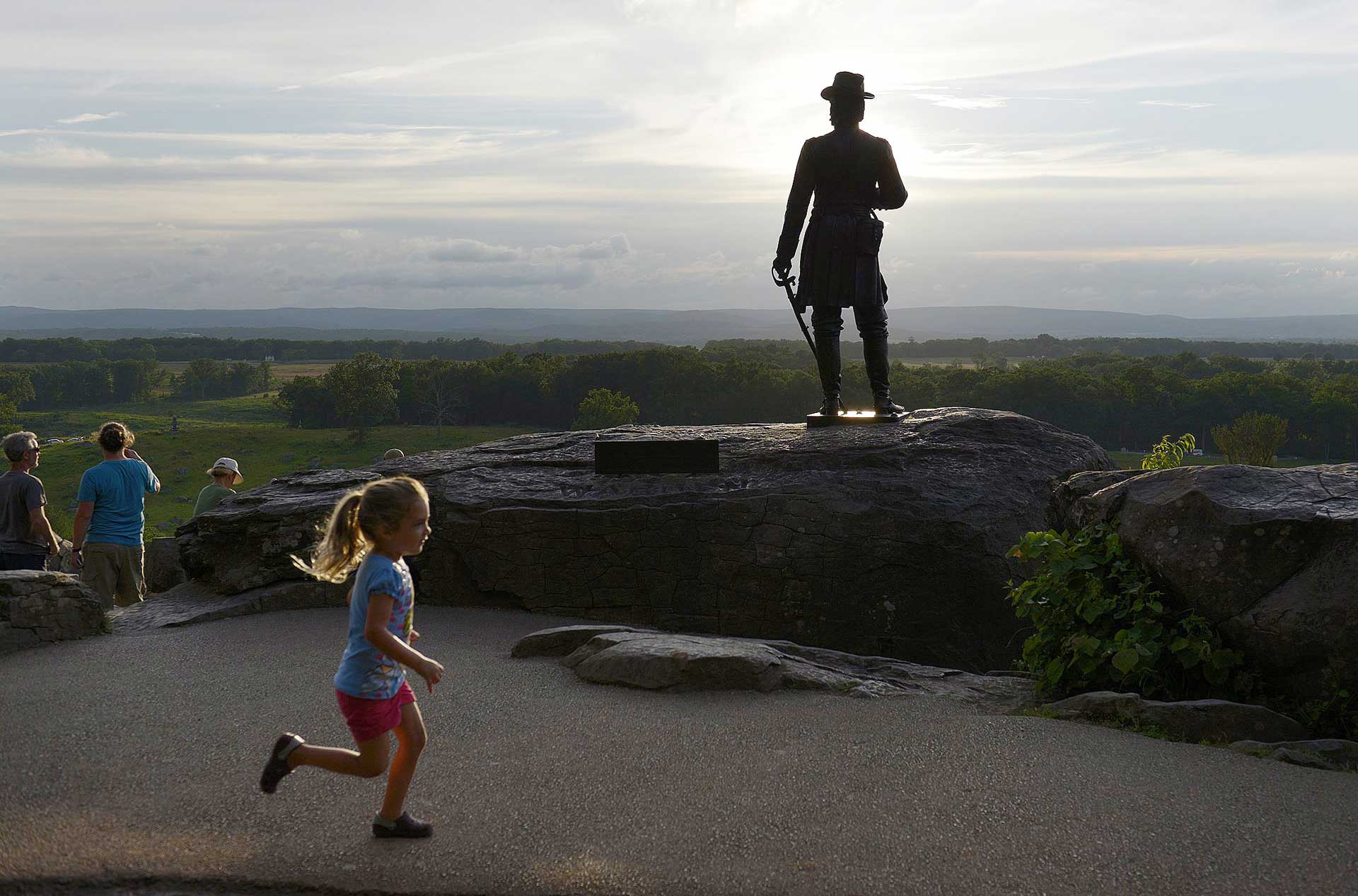 “For the Benefit and Enjoyment of the People.”
– Inscription on the triumphal arch at Yellowstone National Park’s northern entrance in Gardiner, MT., from the Organic Act of 1872, which created the nation’s first park

There is a profound quiet on the sloping grassy hillsides marked by battlefield monuments and in the graveyard at Gettysburg National Military Park that is the site of the nation’s bloodiest Civil War battle and its most famous address.

At the craggy, jutting, boot-busting outcrop called the Knife Edge on the Appalachian Trail, one of two National Park Service Scenic Trails in Pennsylvania, hikers pause to behold a horizon of rolling green ridge lines that mark the nation’s oldest mountain range.

In Philadelphia’s Independence Hall, another National Historic Park operated by the National Park Service, visitors can see the room where the Declaration of Independence and the U.S. Constitution were signed. Admittance appropriately is free.

For many, the nation’s park system is most closely associated with mountains and canyons, waterfalls and geysers, forests and caverns, and all manner of magnificent landscapes so iconic that just to name them evokes crystalline images. It’s a mental View-Master reel that includes Yellowstone and Yosemite, Grand Teton and Grand Canyon, Arches and Acadia, Death Valley and Denali, Mount Rushmore, and many more.

Many are indisputably among the state’s most significant and special places. But you’ll also find hidden-in-plain-sight gems where rangers wear those Smokey Bear-style hats, places like the Gloria Dei Church National Historic Site, the Edgar Allan Poe National Historic Site and the Thaddeus Kosciuszko National Memorial (he was a Polish freedom fighter and military strategist in the American Revolution), all in Philadelphia, and Fort Necessity in Fayette County.

Those NPS sites may not conjure up glossy calendar page images of the great outdoors, but all are pieces of the intricate jigsaw puzzle that is the nation’s park system in the 21st Century, a collection of public lands valuable for its wildness and beauty, and noteworthy for its commemoration of tragedy, bravery, cultural contributions and the nation’s historical markers.

Most, but not all, National Park Service sites charge visitors an entrance fee, but you can reduce the hit to your wallet by taking advantage of a number of park pass programs that offer lower or free admission, and are available at national park and other national recreational lands, by phone and on-line.

A listing of Pennsylvania’s NPS sites and the fees they charge can be found on their website.

“A lot of people do think of national parks as being wilderness-style parks, but the system is so varied that whatever you like you can find,” said Brendan Wilson, park ranger at the Flight 93 National Memorial, and coordinator of the NPS centennial programming in the state.

“If you want history, you want to take a stroll or a hike, want to rock climb or explore in wilderness you can find it,” he said. “Pennsylvania has Independence Hall, Gettysburg and Flight 93, for example, all historic sites. But you can also find park sites, from natural settings to house museums, telling other stories.”

“At the Flight 93 Memorial there are hiking trails and a wildflower meadow and those are different ways for visitors to connect to the site,” he said. “We could have 10 people stop by the site and each will come away with a different memory, a different experience.”

By the time President Woodrow Wilson signed legislation creating the National Park Service on Aug. 25, 1916, there were already 14 national parks and 21 national monuments, including several, like the Grand Canyon, that would later become national parks.

Yellowstone, the first national park, was established in March 1872 in what was then the territories of Montana and Wyoming, and placed under the control of the U.S. Department of the Interior. Not only did that spawn a national park movement in the U.S., it sparked international interest that has led to the establishment of more than 1,200 parks or equivalent reserves worldwide in 100 countries, according to the Park Service.

Historian and writer Wallace Stegner famously called the national parks America’s best idea, and added, they are “absolutely American, absolutely democratic, they reflect us at our best rather than our worst.”

“It’s an extremely American idea,” said NPS director Jonathan Jarvis, “Other nations set aside the best places for royalty and the wealthy. But we decided early on that Yellowstone and Yosemite and the Grand Canyon should be preserved for the benefit and enjoyment of the people.”

In the U.S., Sequoia and Yosemite national parks in California were established in 1890, followed by Mount Rainier National Park in 1899.

President Theodore Roosevelt, an early proponent of the national parks along with his camping buddy, Sierra Club founder John Muir, added to the list, establishing new parks at Crater Lake in 1902, Wind Cave in 1903 and Mesa Verde in 1906. He also signed the Antiquities Act, and used it to unilaterally create 18 national monuments and set aside more than 100 million acres of national forests.

The incremental expansion of park lands continued into the 1930s, with the addition of such well-known Western parks as Glacier, Rocky Mountain, Denali, Grand Canyon and Zion, and the first two Eastern parks, Acadia (1919) in Maine, and Shenandoah (1926) in Virginia.

In 1933, the domain and mission of the National Park Service grew dramatically when President Franklin D. Roosevelt, by an executive order that reorganized the federal executive branch, transferred 56 national monuments and military sites from the U.S. Forest Service and the War Department, to the NPS, adding areas of historical importance, as well as scenic and scientific value, to the service’s responsibilities. The Preservation of Historic Sites Act in 1935, further strengthened the park service’s participation in historic preservation, authorized the restoration and maintenance of historic properties, and allowed for the establishment of related museums and other interpretive activities for public education.

Many of Pennsylvania’s battlefields and historical sites are administered by the park service as a result of those changes.

“Our national parks continue to represent not only the physical assets of America, but also its core ideas of courage, heroism, sacrifice and accomplishment,” Mr. Jarvis said. “The park sites around Pennsylvania embody those core American values.”

The NPS got another bump in 1968 when Congress approved two acts that would add additional and very different units to its management responsibilities. The Wild and Scenic Rivers Act, identified eight rivers in nine states as initial components of the wild and scenic rivers system. And the National Trails System Act designated the Appalachian and the Pacific Crest trails as national scenic trails and ordered the study of 14 additional routes for possible designation. The North Country Trail, which runs through the northwestern part of Pennsylvania, is one of those added to the system.

While the park system has not been without its critics, usually over management issues involving maintenance, local property rights, crowds and wildlife, it has enjoyed bipartisan support.

President Jimmy Carter created a dozen national monuments and expanded Denali National Park in Alaska in 1977, adding 47 million acres to the national park system. In the 1980s, President Ronald Reagan added 18 new units to the system, including the Steamtown National Historic Site in Scranton in 1986 and the Potomac Heritage National Scenic Trail in Pennsylvania, Maryland, Virginia and Washington, D.C.

Those NPS sites annually attract about 300 million visitors and contribute $30 billion to the U.S. economy.

In Pennsylvania, about 9 million people a year visit NPS sites, including many special places where history has been highlighted, preserved and venerated, according to Megan O’Malley, an NPS ranger at the Johnstown Flood National Memorial in Cambria County, who was once a ranger at Yellowstone.

“Yellowstone was magnificent, don’t get me wrong. As a ranger there I would [cross-country] ski alone in winter through the geyser basin and it was breathtaking,” Ms. O’Malley, a Mt. Lebanon native, said. “But the story of the Johnstown Flood, the human stories, are just much more dramatic and have a strong personal connection to me. They’re layered, and just so compelling.”