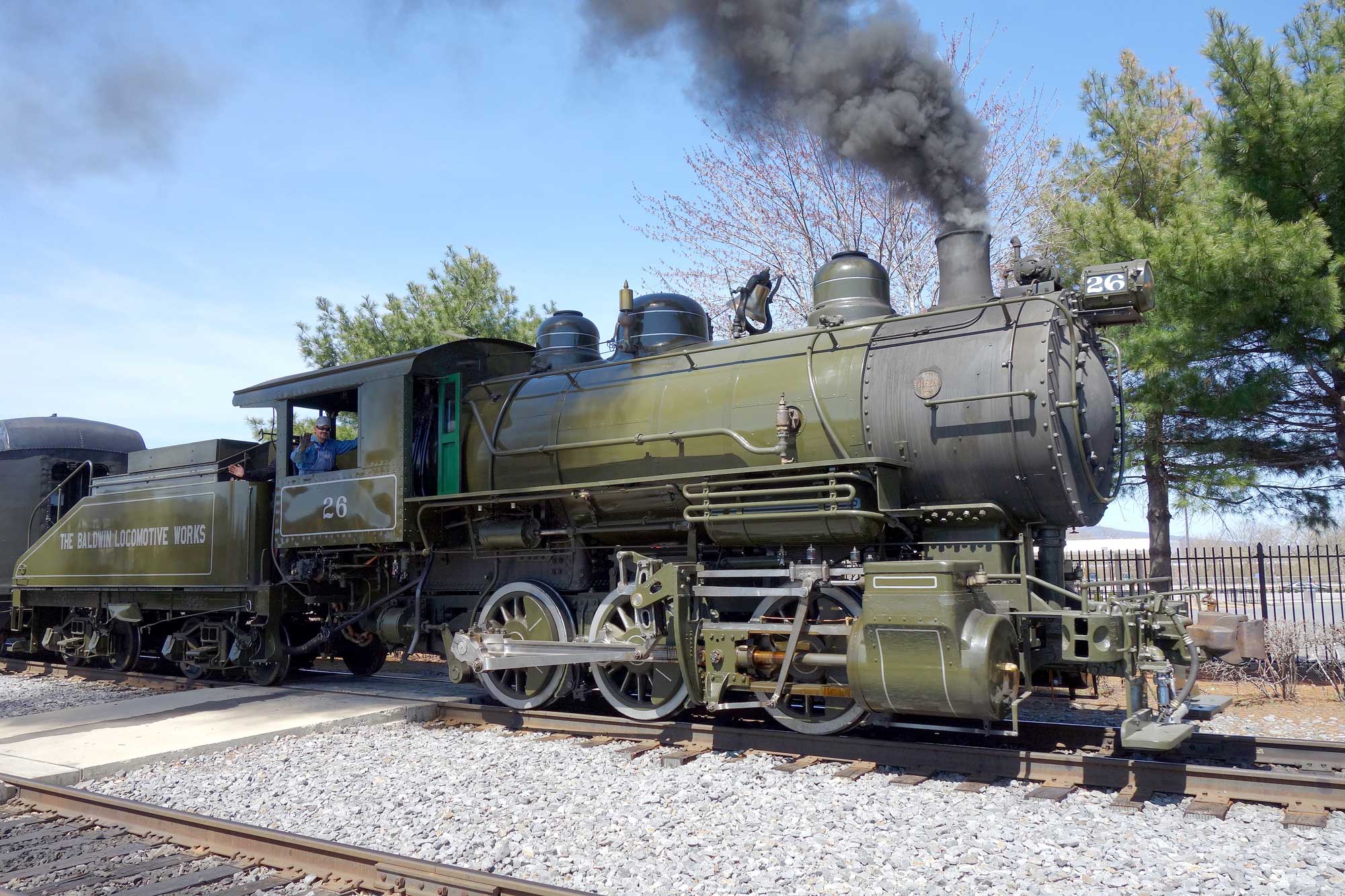 Steamtown National Historic Site had been without an operating steam locomotive to power its short train rides and excursions for three years until the Baldwin #26 was restored. (Laura Legere/Post-Gazette)

The new park superintendent was forewarned: with steam engines comes soot on your car every evening, grit in your office and cinder marks on the brim of your ranger hat.

Until April, Debbie Conway’s two-year-long tenure leading the Steamtown National Historic Site had overlapped with a three-year steam drought at the park, during which its namesake steam locomotives were in the shop for renovations.

All of the short summertime shuttles around the rail yard and longer train excursions under her watch were propelled by diesel engines. An optimist might say the interlude gave park visitors a glimpse of the historical shift when diesel locomotives eclipsed steam.

But this isn’t Dieseltown. The historic site, a combination museum and working railroad yard, is dedicated to preserving and explaining the history of steam railroading and its impact on the nation.

So on the April morning when the newly rebuilt Baldwin Locomotive Works #26 switch engine steamed out of the roundhouse, got hitched up to passenger cars and began pulling visitors behind steam for the first time since the last operating steam engine was taken out of service in late 2012, Ms. Conway stopped her conversation in an exhibit hall mid-sentence to attend to the sound of a mellow hoot in the distance.

The working turntable at Steamtown’s center moves engines and cars into position for display, maintenance or short journeys. (Laura Legere/Post-Gazette)

Steamtown preservation specialist Mike Oprisko coordinates a crew as it moves a wheel set, including axle and wheel, for the Baldwin #26 steam engine during its restoration. (Kenny Ganz/NPS Photo)

The restored roundhouse at Steamtown is both a maintenance shop and an exhibit hall with raised platforms so visitors can view the cars and engines up close. (Laura Legere/Post-Gazette)

The Baldwin 26 is neither the burliest nor the most glamorous of the locomotives and rail cars on view at Steamtown. A temporary exhibit about its restoration explains the locomotive’s history: Initially a homebody, it was built in 1929 at the Baldwin Locomotive Works in Eddystone, Delaware County, and stayed there for nearly two decades, working within the factory complex as a “shop goat,” a kind of rail version of a tug boat, moving rolling stock around.

Then it had other lives, pulling cars in and out of the Jackson Iron & Steel plant in Ohio, and later disguised by a private owner as a locomotive from a mid-central U.S. railroad known as the Nickel Plate Road.

It was traded in 1986 to the Steamtown Foundation — the nonprofit that assembled in large part what is now the historic site’s collection — and it was delivered to the National Park Service in 1990.

In Scranton it became another kind of dependable shop goat, pulling visitors in railroad cars on short trips through the yard, towing replica circus wagons or taking Santa Claus on whistle-stop Christmas tours. In December 1999, it was removed from service to be restored.

Gradually over 16 years, with a big push during the final three, the Baldwin 26 was rebuilt.

John Bibalo, a preservation specialist, described some of what’s new in the old engine: Thinning spots in the boiler’s steel walls were patched or padded and a modern boiler coating was applied to prevent the build-up of scale that could weaken the steel from inside.

The firebox, which contains the burning coal, was entirely rebuilt with steel sheets that had to be painstakingly molded into shape.

New stay bolts that ring the internal structure like blunt porcupine quills beneath the engine’s outer steel jacket were installed to brace the firebox against its tremendous pressure.

The engine’s steel tires were replaced, as were hundreds of narrow flues, or fire tubes, that channel the hot gases from the burning coal through the water reservoir in the boiler.

The tender, where supplies of water and coal are stored behind the engine’s cab, was repaired, sandblasted and coated.

And, with the advice of steam locomotive color experts from California and Maine, the formerly black Baldwin 26 was painted its original olive green with a historically accurate striping pattern and aluminum lettering.

Many of the repairs or replacement parts were made in the park’s locomotive shop using machinery that dates to the 1930s or ’40s, during the late stages of the steam era. Park visitors can take a guided tour of the shop to see what the preservation crews are working on and how.

“Part of our mission is to preserve, not just the story of the engine, but also how the work was done on it,” Ms. Conway said. “That’s the whole story for us.”

Just as the crews don’t use automated modern equipment to create a part they need, they also don’t have access to the historical technologies that streamlined their predecessors’ work. As Mr. Bibalo fashioned the replacement firebox for the Baldwin 26, it took him weeks to do with a pneumatic flanging machine what the Baldwin Locomotive Works might have stamped out in a day using a steam hammer and die.

As one of the crew members put it, “We’re reinventing the old.”

“I would lie in bed at night thinking, ‘How am I going to do this?’ ” Mr. Bibalo said. He still keeps a notepad by his bed in case he wakes up with an idea.

The crew members also learn to read the locomotives to intuit what they need. During monthly maintenance of the steam engines, for example, someone climbs inside the cleaned-out firebox to test for broken stay bolts by tapping each one with a hammer. If the bolt is solid the hammer will spring back; if it’s broken the hammer strike will feel more like a thud.

Steamtown exhibit specialist John Bibalo uses a welding torch to form beads along a sheet of steel. The work was one step in rebuilding the coal-burning compartment, or firebox, for the restored Baldwin #26 steam engine. (Kenny Ganz/NPS Photo)

Dave Kulesa, an exhibit specialist at Steamtown, uses a gas flame to heat a tire from the Baldwin #26 steam locomotive in a process known as sweating the tire. The heat expands the steel tire to separate it from the steel wheel. (Kenny Ganz/NPS Photo)

Exhibit specialist Bruce Mowbray works in the locomotive shop at Steamtown National Historic Site. He is grinding a metal hanger in preparation for it to fit on a boiler. (Kenny Ganz/NPS Photo)

In this photo from the 1990s, Steamtown exhibit specialist Jim Reid uses an air hose to clear out accumulated cinders and spent coal that can clog the fire tubes that carry hot gases from a steam engine’s coal fire through its water chamber. The procedure is still used when steam locomotives undergo a monthly boiler wash. (NPS Photo)

The restoration of the Baldwin 26 is expected to be a preview of similarly comprehensive overhauls of other locomotives at the park. Ms. Conway’s goal is to have four steam engines restored and ready to run — one for the yard, one for longer excursions, one backup engine and one in for routine repairs, all in rotation.

For now, restorers are focused on the Boston & Maine Railroad #3713, which is in the locomotive shop, stripped down to its boiler. That locomotive is a passenger engine built for speed and powerful enough to summit hills on excursions that the Baldwin 26 can’t muster. In the meantime, the long journeys will continue to be powered by diesels.

Little as it is, the Baldwin 26 makes the case for what a museum on the move can do. It pronounced a chest-shaking whistle when it reached the turntable at the center of the park on its rededication day, then it chuffed out to the yard where so-called firemen would take shifts feeding its coal fire by shovel all day.

Steamtown’s goal, since the historic site’s opening in 1995, has been to exhibit “live steam.”

“You really can’t get the full experience without the engine being active,” Ms. Conway said. “It’s very sensory — the smell, the sounds, the taste.”

The return of steam to the park also offers a history lesson in dealing with a dirty fuel. Festive desserts were going to be served outside in the turntable plaza, not behind the glass of the visitors center, until someone thought better of it.

“One of the staff said, ‘You know, you’re probably going to get soot in those cakes,’ ” said Ms. Conway, whose hat brim was still pristine.