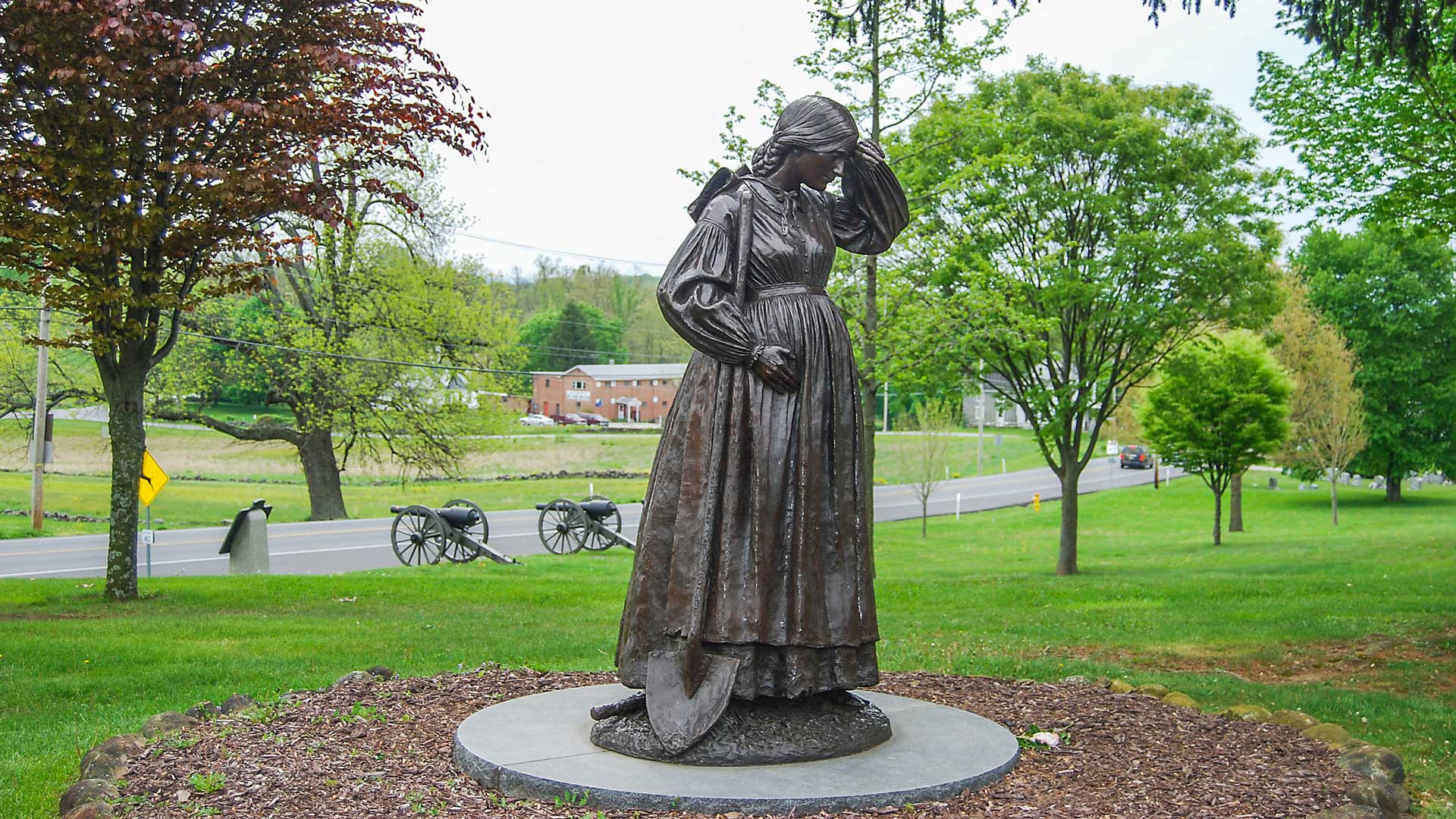 A statue of Elizabeth Masser Thorn at the Evergreen Cemetery Gatehouse. Elizabeth took over as caretaker of the cemetery when her husband, Peter Thorn, joined the Union Army. When the war spilled into Gettysburg, Elizabeth, who was six months pregnant at the time, and her elderly father dug graves for fallen soldiers in the weeks following the battle. (Stephanie Ritenbaugh/Post-Gazette)

During the three-day battle of Gettysburg, about 165,000 soldiers clashed in and around the small town, which then had a population of about 2,400.

When the battle was over on July 3, 1863, 51,000 soldiers were killed, wounded, captured or missing, according to the Gettysburg Foundation.

And it took considerable time and effort to handle the aftermath of the battle.

“The first buildings that filled with wounded were the schools and churches, and it took some time to get them moved out,” said John Heiser, historian for the National Park Service. “Many people who lived in town and on the outskirts lost everything. They filed claims to the government for things including bedding, clothing, livestock, farm equipment. But few recovered money from the government — they had to prove their losses were due to a Union order.”

The George Rose Farm on the battlefield was occupied by Confederates, he noted. Bodies were still on the farm until July 7, four days after the Confederates retreated.

“As late as July 13, a visitor taking notes said he encountered George Rose complaining about unburied bodies in the grove,” Mr. Heiser said. “Horses were killed and carcasses were left where they fell. Many times they were just burned. That smell mingling with the dead and flies in the heat, the conditions were ripe for disease — and it’s surprising that disease wasn’t more common during that summer.”

Tending to the wounded and cleaning the carnage was a terrible task.

“For the average civilian in town — most were women — it was a horrible thing. You’re dealing with wounded men in your kitchen, your hallway, and there’s no one to care for them except you,” Mr. Heiser said.

At the entrance of Evergreen Cemetery on Baltimore Street is a statue commemorating the work of one such woman, Elizabeth Maser Thorn. She and her husband Peter were German immigrants and the first family to live in the cemetery’s gatehouse. When Peter Thorn joined the Union Army, Elizabeth assumed his duties as caretaker from 1862-1865.

She was six months pregnant when the battle landed on her doorstep. She was also caring for her three small children and her elderly parents. Union troops ate bread as fast as she could bake it. Her family made sure cups were ready at the water pump outside.

“She overheard an officer telling another that they were [mistakenly] killing their own troops because they didn’t know the country, and badly needed a guide,” according to the 2004 book “Firestorm at Gettysburg: Civilian Voices.” “…the persuasive Mrs. Thorn convinced the officer she could go with him and show him the main roads. Walking on the ‘safe side of the horse’ for protection, she gave the officer a quick tour — braving the whizzing bullets and exploding shells.”

Soon, the family was forced to leave their house entirely. When the fighting ended, they returned home and saw they had lost everything.

“Everything in the house was gone except three feather beds and a couple of pillows. The beds… were not fit to use again. The legs of six soldiers had been amputated on the beds in our house and they were ruined with blood…,” Thorn said in her own account, republished in “Firestorm at Gettysburg.”

Thorn was not only responsible for pulling her home back together, but also Evergreen Cemetery. She and her father dug graves, burying 91 soldiers in the following weeks during those hot summer days.

A plaque near the gatehouse is dedicated to “all the women who served in various capacities before, during and following the Battle of Gettysburg. Their contributions, though rarely noted or honored, were immeasurable.”