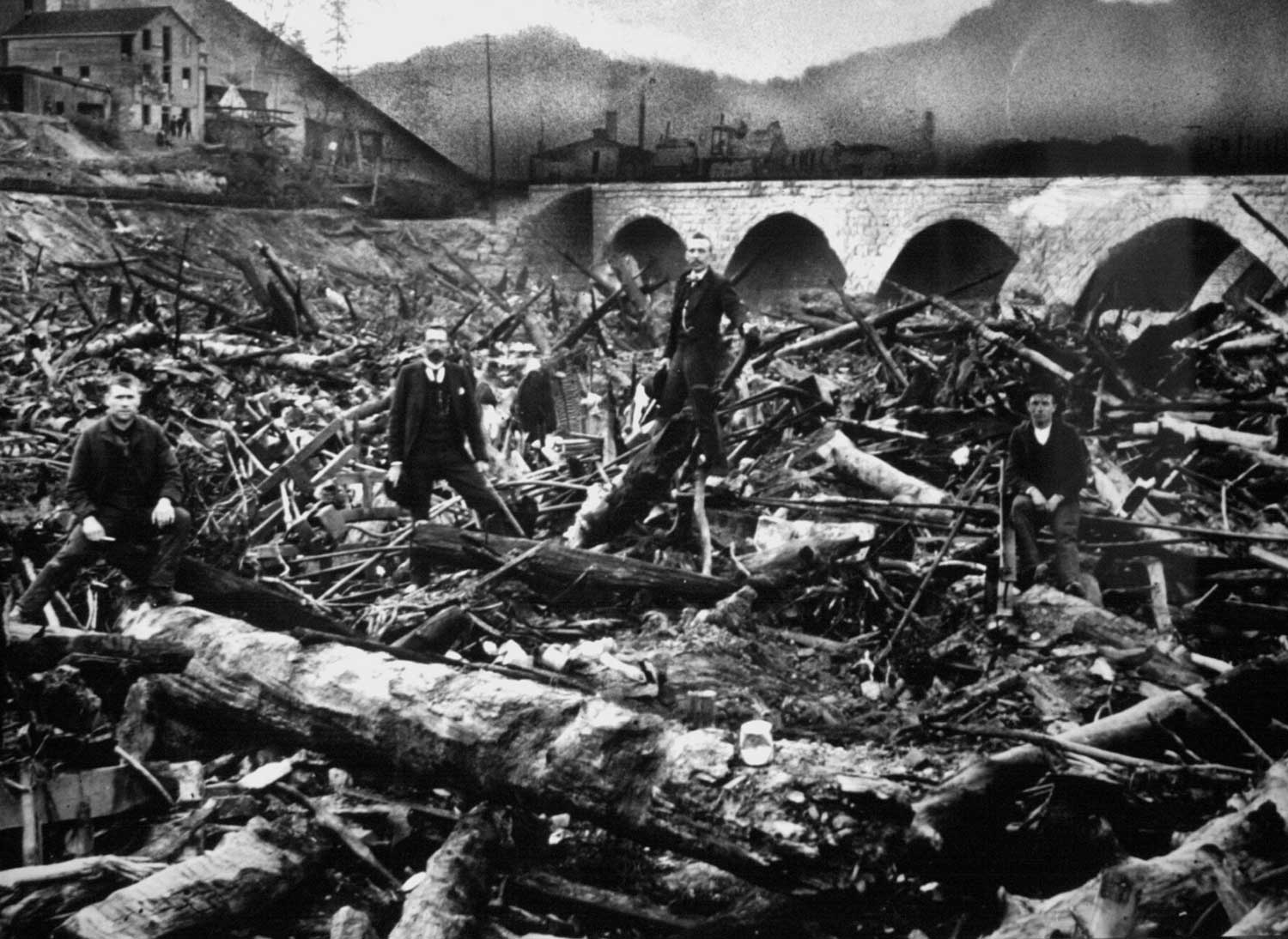 This photo released by the Johnstown Flood Museum shows the debris that began to pile up against Johnstown, Pa.'s stone bridge and caught fire after the South Fork Dam gave way on May 31, 1889 killing 2,209 people. More than 116 years before Hurricane Katrina destroyed New Orleans, a flood in Johnstown exposed the rift between rich and poor, the kindness of strangers and, in the end, the power of the human spirit to rebuild. (AP Photo/Johnstown Flood Museum)

If you stand down in the middle, at the base of the dam where the earth gave way, there’s an overwhelming sense of emptiness and loss.

That’s how it still feels deep in the gaping hole that was cleaved into the face of the South Fork Dam on the afternoon of May 31, 1889, when storm-swollen Lake Conemaugh burst through.

On that sodden Friday, in the narrow 14-mile long valley from here to Johnstown, 2,209 people died as a wave of water, moving with the force of Niagara Falls, flattened the towns of South Fork, Mineral Point, East Conemaugh, Woodvale and, finally, Johnstown.

The flood, which washed away homes, businesses, churches, bridges, train cars and whole families, was the worst death toll disaster in U.S. history at the time. And It still ranks as the sixth worst, just behind the surprise Japanese air attack on the U.S. naval base at Pearl Harbor, on Dec. 7, 1941, where 2,467 died.

From the wide picture windows of the Johnstown Flood National Memorial visitors center, just up the hill from the dam site, it’s easy to see the foreshortened ends of the stone and earth breastworks, still anchored to their hillsides and reaching out like arms that won’t ever embrace again.

That’s because, 127 years later, there’s both nothing here for the dam to hold onto along the South Fork of the Conemaugh River. Visit the dam, wander through the exhibits, watch the visitors center movie, and come away with the sense that this disaster was both preventable and inevitable.

Even with its rich trove of archival photos, its interactive map that charts the path of the wall of water bearing down on Johnstown, the coroner’s handwritten records that are both incomplete — about a third of the bodies were never identified — and provide too much grisly detail, this park service site is all about what’s not here anymore.

“It’s very much what we struggle with here at the flood memorial,” said Megan O’Malley, a National Park Service ranger and chief of interpretation at the flood memorial. “That void is in the forefront of what we do here because a lot of stuff just isn’t where it was before.”

The South Fork Dam looked impressive enough, but, according to the National Parks Service, its checkered construction history and inadequate maintenance combined to make it a “ticking time bomb.” Here’s the who, where, when, how and why the dam was built and what lit the fuse that caused its failure:

The flood killed 2,209 people, including 99 entire families. One hundred twenty-four women lost their husbands; 198 men lost their wives; 396 children under the age of 10 died. It destroyed four square miles of Johnstown, including 1,600 homes and 280 businesses, and caused more than $17 million in property damage.

Photograph was taken from a point below the breast of the South Fork Dam whose collapse May 31, 1889, caused the historic Johnstown Flood, a catastrophe which took more than 2,000 lives. A 55-acre tract at the dam site will become a unit of the National Park System under a bill signed into law by President Johnson. The tract will be known as the Johnstown Flood National Memorial. September 20, 1964 photo. (AP Photo)

This photo released by the Johnstown Flood Museum shows the destruction along Main Street in Johnstown, Pa., following the collapse of the South Fork Dam May 31, 1889, killing 2,209 people. More than 116 years before Hurricane Katrina destroyed New Orleans, a flood in Johnstown exposed the rift between rich and poor, the kindness of strangers and, in the end, the power of the human spirit to rebuild. (AP Photo/Johnstown Flood Museum)

Wrecked by neglect and shame

So the dam is all but gone.

Lake Conemaugh, the 2-mile-long, 450-acre recreational impoundment where club members boated and fished for black bass brought in from Lake Erie by the train load, is gone, leaving behind the empty bowl of a lakebed.

The South Fork Fishing and Hunting Club, owner of the dam, is gone, disbanded and dissolved after the flood.

The group’s clubhouse, a rambling three-story frame structure in the Eastlake Style, with a gingerbread-encrusted wrap-around porch and room for 200 guests, still stands. But it’s more skeleton than showplace. The park service recently put on a new roof, interior supports and a coat of exterior paint. But the once well-appointed interior remains severely damaged, its fixtures gone and its walls wrecked down to exposed lath by time and neglect and, some might hope, shame.

Where is the Woodwell painting?

Gone, too, is one of the two paintings commissioned by the club in 1887, two years prior to the flood, from George Hetzel and Joseph Woodwell, artists who were members of the “Scalp Level School,” a loose cadre of Western Pennsylvania landscape painters led by Hetzel and named after the then-verdant valley 10 miles south of Johnstown where they often went to paint.

Hetzel’s painting, titled “Fisherman on the Conemaugh,” hangs in the visitors center, and is representative of the realistic yet sublimely lit Scalp Level landscape style that bears similarities to the Hudson River school in New York and the Barbizon School in France.

Ms. O’Malley said that according to records of a 1904 auction of furniture and fixtures at the clubhouse, the Hetzel painting was bought by George Wertz, a then-prominent member of the Johnstown community, and donated to the park service by his great nephew, Roger Hager, in 2010.

But there’s no such straight-line record for the painting by Woodwell, himself a South Fork club member, said Ms. O’Malley, who has been on a quest to find it since the Hetzel painting was acquired.

She said there’s no record the Woodwell painting was sold at the 1904 auction, and no listing of it or its title in gallery records or newspaper stories from the time, or university art libraries. The only thing she knows for certain, from gallery records discovered in a library search, is that it was a painting of the rocky New England coastline, a frequent subject for Woodwell, who owned property along the coast at Magnolia, Mass.

She’s even contacted the Woodwell family, but none of the dozen or so “Josephs” owned by various family members match up.

“It could have been taken from the clubhouse before the auction,” Ms. O’Malley said. “There was 15 years between the flood and the auction and the clubhouse was in rough shape, and had been broken into. It could be sitting right now in a Johnstown attic or hanging on a wall in a Pittsburgh home.”

Or it might be hiding in plain sight in the Westmoreland Museum of American Art, where Barbara Jones, the museum’s chief curator, oversees the largest known collection of paintings by Scalp Level artists.

There, on a second floor gallery wall surrounded by six much smaller paintings by Woodwell is a large, 40-by-60-inch painting titled “Seascape, Magnolia, MA.,” featuring a tall, pink, sun-bleached cliff face in front of a wide beach. The painting is dated 1887.

According to documents just discovered in the museum’s files detailing Joseph Woodwell’s life and paintings, the seascape painting was acquired in 1986 from John W. Kephart Sr., a Cambria County and Pennsylvania Supreme Court judge who lived in Ebensburg.

“The Kephart connection is very exciting,” Ms. O’Malley said. “We already know the judge was deeply involved in closing down the affairs of the club and was there when everything was removed. It adds up. It fits with everything we’ve been thinking about and learning about, without having or knowing anything specific about the painting.”

James Kephart, now 60, said in a phone interview from his home in Butte, Mont., that according to “family lore” his grandfather, Judge John W. Kephart Sr., then an attorney, was assigned by a county judge to help close the club and received two paintings in return. James Kephart’s uncle, John W. “Jack” Kephart Jr., inherited one. James Kephart’s father, Alvin Evans Kephart, was given another Woodwell, titled “Ruins of Pompeii.”

“That’s a great painting. It’s hanging behind my sofa. I’m looking at it right now,” Mr. Kephart said. “Uncle Jack sold his shortly before he died in 1990. So it really could very well be the one from the club.”

Ms. Jones, the museum’s curator, thinks so, too.

”I believe, with the link to Kephart, that it sounds like the right painting, and the timing is right too. It’s exciting,” said Ms. Jones, adding that a loan of the painting is possible to the flood memorial’s visitor center, where it could be paired again with the Hetzel painting.

Joseph Woodwell and his artist friends from Pittsburgh spent summers at Scalp Level in the 1870s and 1880s, gravitating to the area’s bucolic beauty and its sharp contrast to the metallic noise and industrial grit of their hometown.

“Scalp Level was Western Pennsylvania’s answer to the Hudson River School,” Ms. Jones said in the museum’s gallery. It was part of the same philosophical trend, picturing nature at a time it was disappearing.

“George Hetzel is significant in the art history of southwestern Pennsylvania for his art but also for establishing the summer painter retreat at Scalp Level at a time when industry was drastically changing the Pittsburgh landscape.”

But that green-leafed Scalp Level setting is gone now, too, transformed by the Berwind-White Coal Co.’s Eureka Mine 40. Once one of the largest in the state, it operated from 1905 to 1919, employing as many as 500 men and producing as much as 2,000 tons of coal a day.

Today’s Scalp Level landscape is grayer, dominated by mountains of barren, erosion-creased coal waste discarded by the mine. In the shadow of those “bony piles” is the empty shell of the old two-story, red brick bathhouse, where the miners showered before climbing up the hill to their small coal patch homes. A lonely railroad track follows Paint Creek, now tinted by polluted mine drainage.

Like a lot things at the flood memorial, the sun-spangled stream, lush woodlands and ethereal light captured on canvas by the artists, aren’t where they were before.