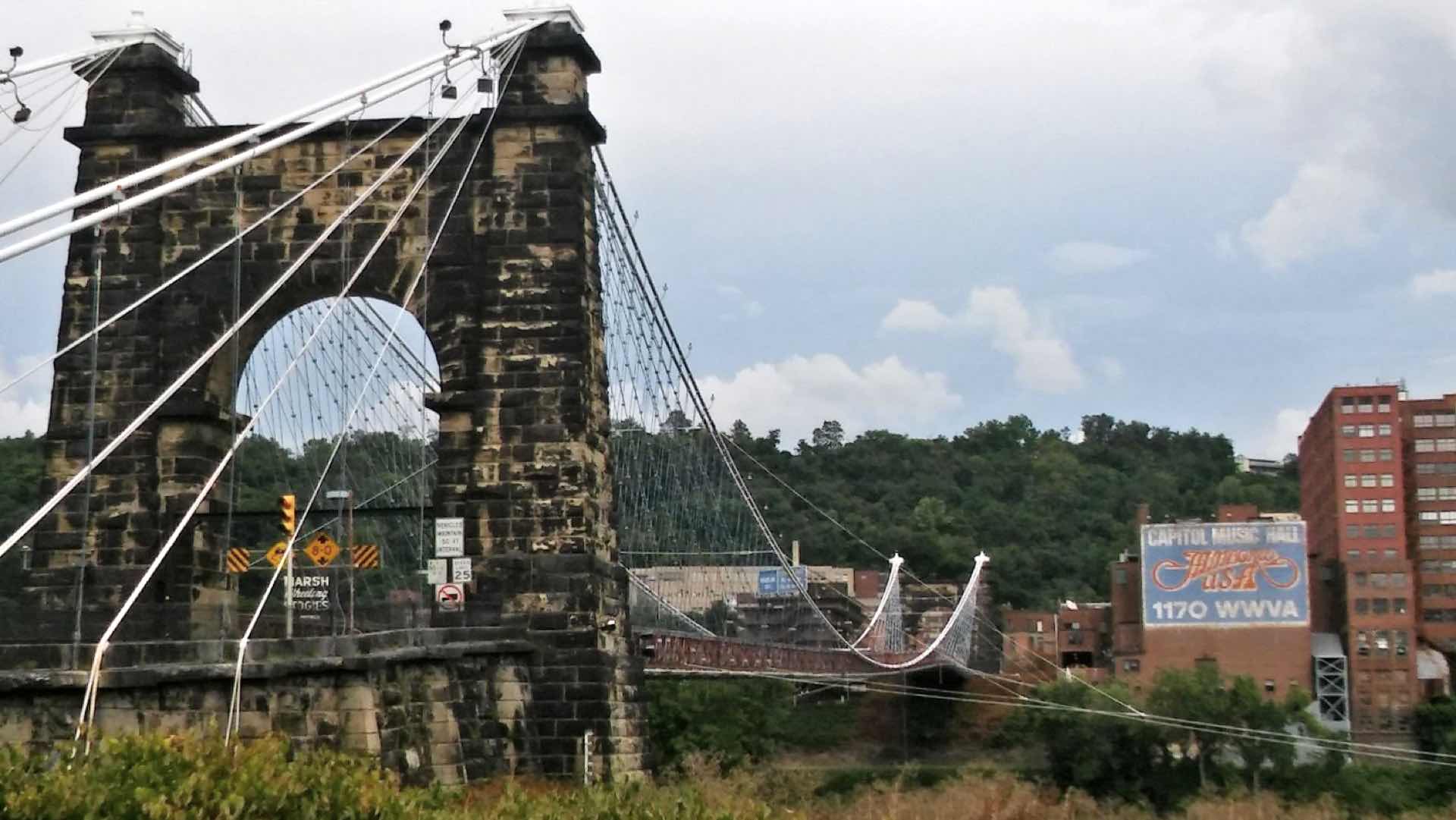 Pittsburgh is a city of bridges, but Wheeling, W.Va., has THE bridge.

The 1,010-foot-long Wheeling Suspension Bridge over the Ohio River was the longest such single span bridge in the world when it was built in 1849, and it’s the centerpiece of the National Park Service’s Wheeling National Heritage Area.

But the iconic architectural achievement is just as famous, maybe more so, for its height, or rather lack of it.

“It’s road deck was just 90 feet above the normal river level and half of the steamboats couldn’t fit under the bridge because of their smokestacks,” said Bekah Karelis, the Wheeling heritage area’s historian.

Pittsburgh industries and businesses were upset about the bottleneck, she said, and Pennsylvania, acting on the city’s behalf, sued Wheeling for obstructing interstate commerce. The U.S. Supreme Court decided the case in favor of Pennsylvania in May 1852, giving the bridge owners 10 months to raise the bridge deck more than 20 feet, an impossible task, or tear it down.

But three months later, after intense lobbying by Wheeling, Congress declared the bridge carrying U.S. Route 40 — the “National Road” — a vital link to the West and an essential postal road entitled to special protection.

But just two years after that legislative reprieve, the bridge, built by Charles Ellet Jr., whose design was selected over one by Brooklyn Bridge architect John Roebling, blew over in a violent wind storm. Pennsylvania filed another lawsuit opposing its reconstruction, but the Supreme Court ruled in favor of Wheeling.

“The bridge was rebuilt with the same [90-foot] clearance, and eventually the steamboats were fitted with hinged smokestacks that folded down and allowed passage up the river to Pittsburgh,” Ms. Karelis said.

Wheeling Suspension Bridge, built in 1849. The 1,010-foot long bridge?was the first to span the Ohio River. It was blown over in a violent wind storm and rebuilt. It carries Route 40, the “National Road,” over the river.

The North Centre Market House, built in 1853, is the oldest cast iron market still in existence in the U.S. Slaves were never sold at this market and during the Civil War, residents of the area were strongly supportive of the Union.

Historical sign noting the downtown historic district where more than 20 buildings and historic sites are part of a walking tour.

Statute of Francis Pierpont, known as the “Father of West Virginia,” outside the state’s Independence Hall.

It’s the kind of quirky historical tale that seems to abound in Wheeling and gives its history a pulse the heritage area, established in 2000, has tried to amplify and promote.

“People relate to stories. If we’re just offering statues and a streetscape they can’t relate,” Ms. Karelis said. “The stories are what they remember — the juicier the better. Stories about wars and conflicts and scandals and statehood. We’ve got our share.”

Most fall into two categories, the Civil War, and, like many national heritage areas in the Northeast, a postindustrial celebration of the hard, dirty and uniquely diverse factory work that gave the region its historical anchor and its people their lasting identity.

No Civil War battles were fought in or near Wheeling, but the city is famous as the birthplace of West Virginia, which was cleaved like a whole ham from the commonwealth of Virginia during the early days of the Confederacy and the passions that swirled around slavery.

In June 1861, shortly after Virginia voted overwhelmingly to leave the union, the northwestern third of the state, far removed geographically and socially from the capitol of Richmond, demurred. Two constitutional conventions, the last in the then new Wheeling Customs House produced the Restored State of Virginia. Inhabitants of the area voted 18,408 to 781 in October of that same year to approve statehood and stay with the Union.

Whether West Virginia’s secession from Virginia was legal is yet another story.

The U.S. Constitution mandates that a state cannot be formed from another state without the consent of the existing state. And legislators in Richmond, Virginia’s capitol, never agreed. The question was heatedly debated in the U.S. Congress, which eventually approved, and after much agonizing, President Abraham Lincoln agreed. West Virginia became the 35th state on June 20, 1863.

“This is the most historic place in West Virginia,” said Debbie Jones, the site manager for the building now known as West Virginia’s Independence Hall. “The third floor courtroom is where all the great debates about separation occurred. Whether it was legal or not is still a debate.”

On a driving tour around Wheeling earlier this month, Ms. Karelis rolled across the historic bridge, with its open steel grate deck, vehicle height restrictions and two-ton weight limit. She said circus elephants were often paraded across the bridge in the late 1800s because it was the only place they could cross the river, and noted how a too-tall Greyhound bus got stuck under a bridge girder the week before.

At the southern end of the bridge she turns left onto Wheeling Island and a street of Victorian-style homes, once “Millionaires Row,” then cruises through the north end of the island where Union soldiers trained. After recrossing the bridge she passes the North Centre Market House, built in 1853, in a neighborhood that was a hotbed of pro-Union supporters before, during and after the Civil War. Unlike the Second Ward Market House in North Wheeling, no slaves were ever sold at Centre Market.

Down the road in south Wheeling, the city’s once mighty industrial center, almost all of the factories and businesses from the city’s pre-1920s heyday — steel, tile, glass, tobacco, pottery and nail manufacturers — are now nationally familiar memories.

“We were known as ‘Nail City’ because of the La Belle Nail Works, the oldest cut nail manufacturer in the U.S.,” she said, also noting Wheeling’s minor league hockey team, a Pittsburgh Penguin’s affiliate, is named the “Nailers.” “Wheeling Tile Co. made all the tile for the New York City subway system. And Sweeney Glass and Warwick China were widely known.”

Wheeling also was known as “Stogie Town.” Mifflin Marsh started making Marsh-Wheeling cigars in his home in 1840, eventually expanding to become an internationally known brand. In 2001, the company was sold to National Cigar, which closed the factory and moved production to Indiana.

Wheeling also was home to Mail Pouch tobacco, famous for its farm barn advertising signs throughout rural Appalachia. The company was started in 1879 by Aaron and Samuel Bloch. According to the story, told in a brochure produced by the Heritage Area and the South Wheeling Preservation Alliance, the brothers noticed cigar workers chewing on stogie clippings and began marketing flavored, scrap tobacco as “chewing tobacco.”

Mail Pouch is gone now, but its building is occupied by Swisher International Inc., which makes its Swisher Sweets cigars there.

“The big problem with our industrial heritage is that we don’t have much left. So many of the buildings are gone, torn down during the urban renewal from 1950 through the 1970s, that those areas are not eligible for historic district designation. There’s just too many missing teeth.”