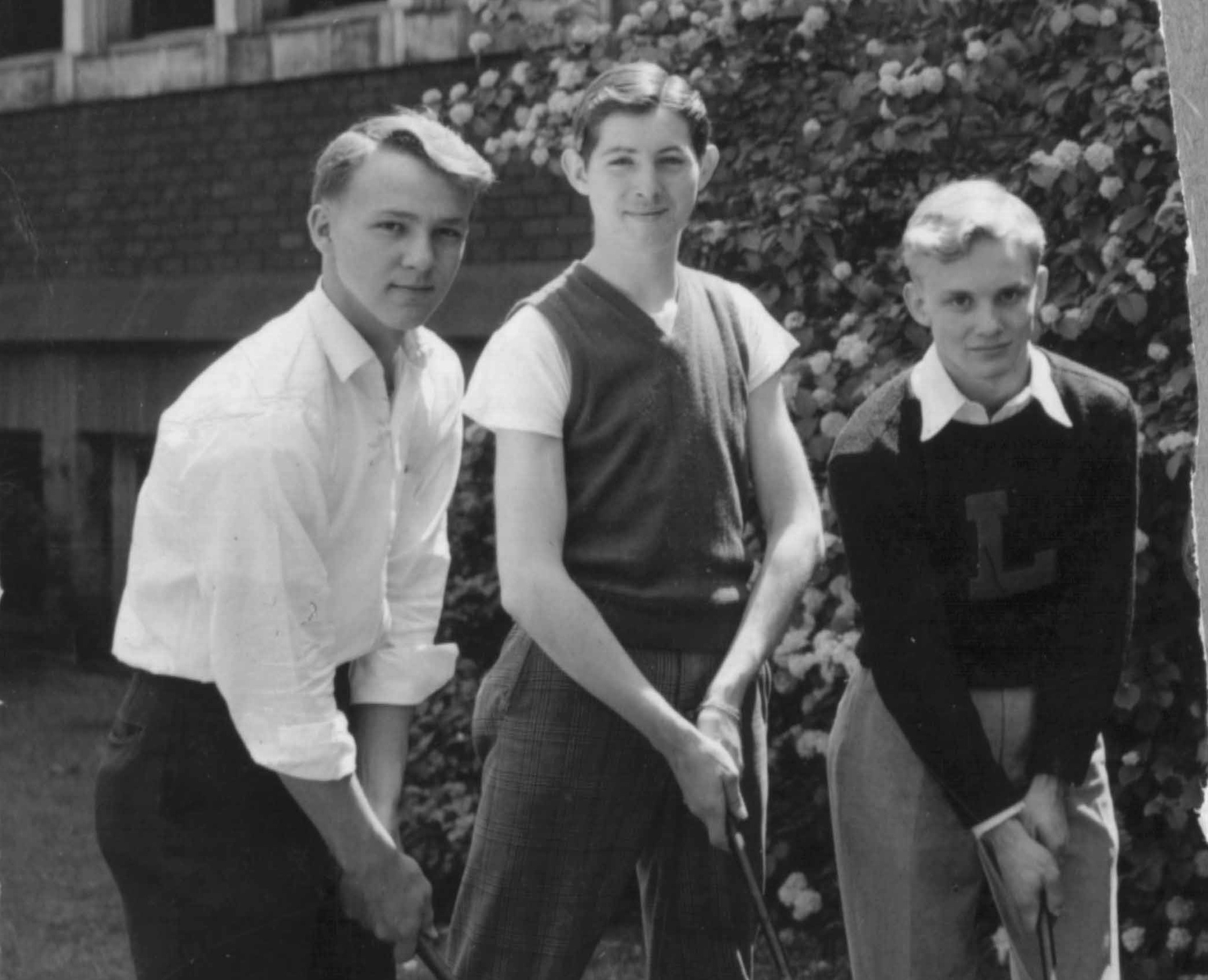 Arnold Palmer, left, with some of his Latrobe High School teammates in the 1940s. (Post-Gazette)

Before he was “The King,” Arnold Palmer wore the crowns of high school golf champion in Western Pennsylvania and the entire state.

Palmer’s association with high school golf went back to the 1940s and continued as recently as two years ago, when the WPIAL Class AAA individual championship was played at Latrobe County Club. Palmer watched as Fox Chapel sophomore Anthony Cordaro beat Indiana’s Kyle Grube to win the title, and also earn congratulations from Palmer afterward.

“That was awesome,” Cordaro said that day. “We made a joke about the course record and that was really cool. He’s a really cool guy.”

Cordaro stood in the shoes that Palmer once wore. Sixty-eight years earlier, Palmer ruled the WPIAL. But he didn’t stop there. As a junior at Latrobe High School in 1946, he also won a state championship — and repeated the feats the following year.

In 1946-47, Palmer became the first player to win back-to-back WPIAL titles. Those same years, he was the second to win consecutive state (PIAA) championships.

Palmer was a freshman at Latrobe when he started to have an impact on the high school team, which was extremely unusual for a ninth-grader. After a match against Jeannette, a story in The Pittsburgh Press stated, “Palmer demonstrated exceptional skill in the match, having a medal score of 70, two over par, at the Latrobe County Club.”

Back in those days, high school golf in Pennsylvania was played in the spring. Now it is played in the fall. In May 1945, when Palmer was a sophomore at Latrobe, he tied for second at the WPIAL championships, shooting an 86 at the Pittsburgh Field Club. Butler freshman Roger Jewett won the title at 84.

Less than a week later, Palmer tied for third at the PIAA championships in State College. After 36 holes, Palmer was tied for the lead with Jack Weaver of Camp Hill. But Palmer shot 79 on the final day, while Weaver carded a 72.

The following year, at age 17, Palmer won the WPIAL at Edgewood Country Club by shooting 73, and followed that with a two-shot victory in the state championship tournament in State College. Palmer’s 223 beat Penn Township’s Don Yenets, who had 233.

In 1947, Palmer was terrific at the WPIAL championship at Westmoreland Country Club, easily winning at 3-under 69. Second-place finisher Leroy Bringe of Oakmont was second with 76.

Then at the 1947 state championship tournament at Centre Hills Country Club in State College, Palmer won the title with a 54-hole score of 217, the lowest in the 13 years of the tournament. On the final day, he birdied 17 and 18 to shoot 68 and finished six strokes ahead of the second-place finishers.

In 2007, 60 years after his second state title, Palmer greeted all players before the start of the WPIAL championships at Latrobe County Club.

“A lot of people might not even give you the time of day, but I remember him driving up the first fairway in a car with his [Labrador Retriever] right next to him,” said WPIAL executive director Tim O’Malley. “He greeted the entire group, stood for pictures and wished them well. He had to leave right away and flew out by airplane. But what he did was he flew his plane right over the first tee and tipped his wings to the kids playing.”