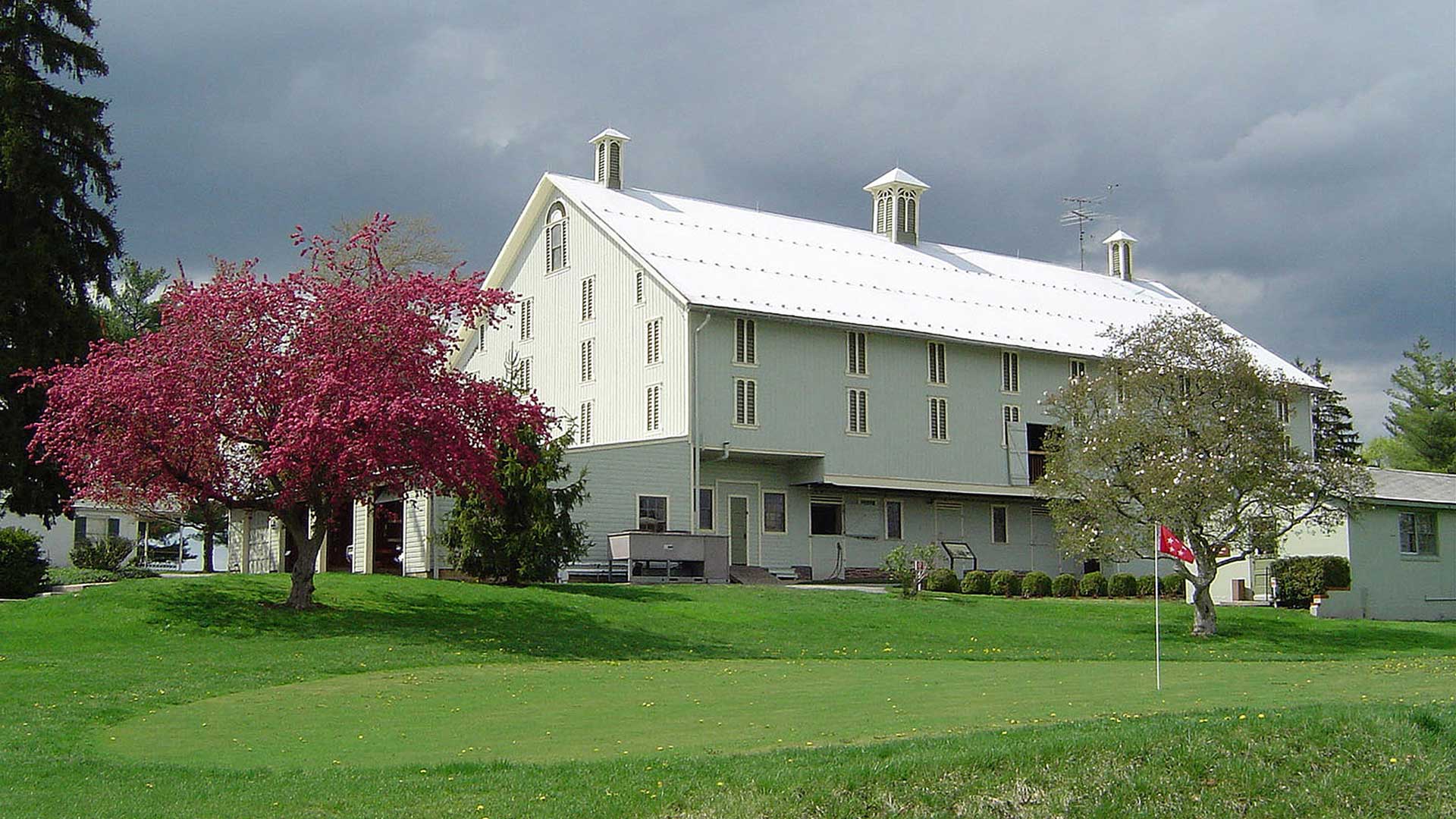 The Eisenhower Farm barn dates from the 1880's. The President stored hay on the upper level and kept his horses in the lower. Today it houses some of his farm machinery. (Photo credit: National Park Service)

These days, tourists and National Park Service rangers walk the grounds of the Eisenhower farm here. A short bus ride across the Gettysburg National Military Park brings visitors to the site, where they can examine the house with its souvenirs of presidential life, the show barn with its Pennsylvania Farm Show ribbons and the grounds with their helicopter landing pad.

But during the presidency of Dwight Eisenhower, the rural escape was a site of important meetings between world leaders.

Eisenhower hosted former British Prime Minister Winston Churchill, French President Charles de Gaulle, Chancellor Konrad Adenauer of West Germany and Prime Minister Jawaharlal Nehru of India at the farm. And in September 1959, he brought for a brief visit the Soviet leader Nikita Khrushchev, as Eisenhower sought to defuse the Berlin crisis, which threatened the peace in Europe and the world.

The Eisenhowers purchased their Gettysburg farm in 1950. Most of the farm house dated from the mid 1700’s and was in disrepair. Their reconstruction of the home was completed in 1955. (Photo credit: National Park Service)

The President’s den reflects his many interests. It includes Civil War artifacts and a portion of his 860 book library. (Photo credit: National Park Service)

The crisis was sparked in 1958, when Khrushchev declared that the United States, Great Britain and France had to end their occupation of West Berlin, handing it over to Communist-controlled East Germany. This was unacceptable to the United States, and it exacerbated the strain in a relationship that already was adversarial.

“There was a genuine worry among thinking people that you could have Armageddon. You could have World War III. One side or another might launch an unprovoked attack,” said Michael Birkner, a professor at Gettysburg College, said of the tension between the United States and the Soviet Union during the 1950s.

With the Berlin situation unresolved, Khrushchev arrived in Washington, D.C., for a visit to the United States that would include talks with Eisenhower.

Access is by shuttle bus only from the Gettysburg National Military Park visitor center and museum at 1195 Baltimore Pike, Gettysburg. See website for bus schedule.

The Soviet leader toured the United States on a closely watched jaunt that included a visit to a corn farm in Iowa, a tour of a plant in Pittsburgh and, in Los Angeles, disappointment that he would not be able to see Disneyland.

When it was time to get down to business, Eisenhower and Khrushchev traveled to Camp David, the presidential retreat in Maryland’s Catoctin Mountain Park, for talks. On Sept. 26, they took a helicopter ride to the Gettysburg farm, which Eisenhower and his wife, Mamie, had purchased in 1950. At the farm, Khrushchev showed an interest in Eisenhower’s herd of Angus cattle, and the president offered to send him one as a gift.

Eisenhower wanted Khrushchev to meet his grandchildren. One of his granddaughters, Susan Eisenhower, who was 7 at the time, recalled in a recent interview that she and her siblings met the Soviet premier on the sun porch, where her grandparents entertained important visitors to the farm.

“I was very intrigued by this person … there was a lot of attention given to this lengthy visit to the United States,” she said. ”I remember well my parents’ instructions about how to keep the discussion of the meeting confidential. We were not supposed to talk about it at school.”

The Soviet leader asked Eisenhower’s grandchildren for their names, and told them what they would be called in Russian (except for Susan, whose name didn’t seem to have a Russian match.) At the end of the visit, Khrushchev gave the grandchildren little pins in the shape of red stars. But the children didn’t get to keep them long.

“My mother wanted those red pins,” Ms. Eisenhower said. ”She certainly didn’t want us to wear them anywhere.”

In the surroundings of the farm, President Eisenhower recalled in his memoirs, Khrushchev was “a benign and entertaining guest.”

The nation was waiting to hear how the talks went — The New York Times report on the conclusion of the visit, dominating the front page, noted that the results were made public “at the improvised White House press headquarters in a Gettysburg movie house.” (The newspaper observed in a headline: “Grandchildren key to president’s trip.”) The news seemed to be positive.

“You get a sense of possibility and an optimism that this Cold War could get less cold as a result of Khrushchev’s visit to the Eisenhower farm,” Mr. Birkner said.

It was not to be.

In May 1960, Eisenhower was preparing for a summit in Paris between western nations and the Soviet Union when an American U-2 spy plane went missing over the Soviet Union. The U.S. president was at the farm when an aide called to say that Khrushchev had announced the Soviets had captured the pilot, Francis Gary Powers, and film from the plane’s cameras, said Rick Lemmers, a National Park Service ranger stationed at the Eisenhower site. With Khrushchev angered, the summit meeting was a bust.

“Ike was disappointed because he had really, really hoped he could have ended the Cold War before he left office,” Mr. Lemmers said.

Instead, the tension continued for years.