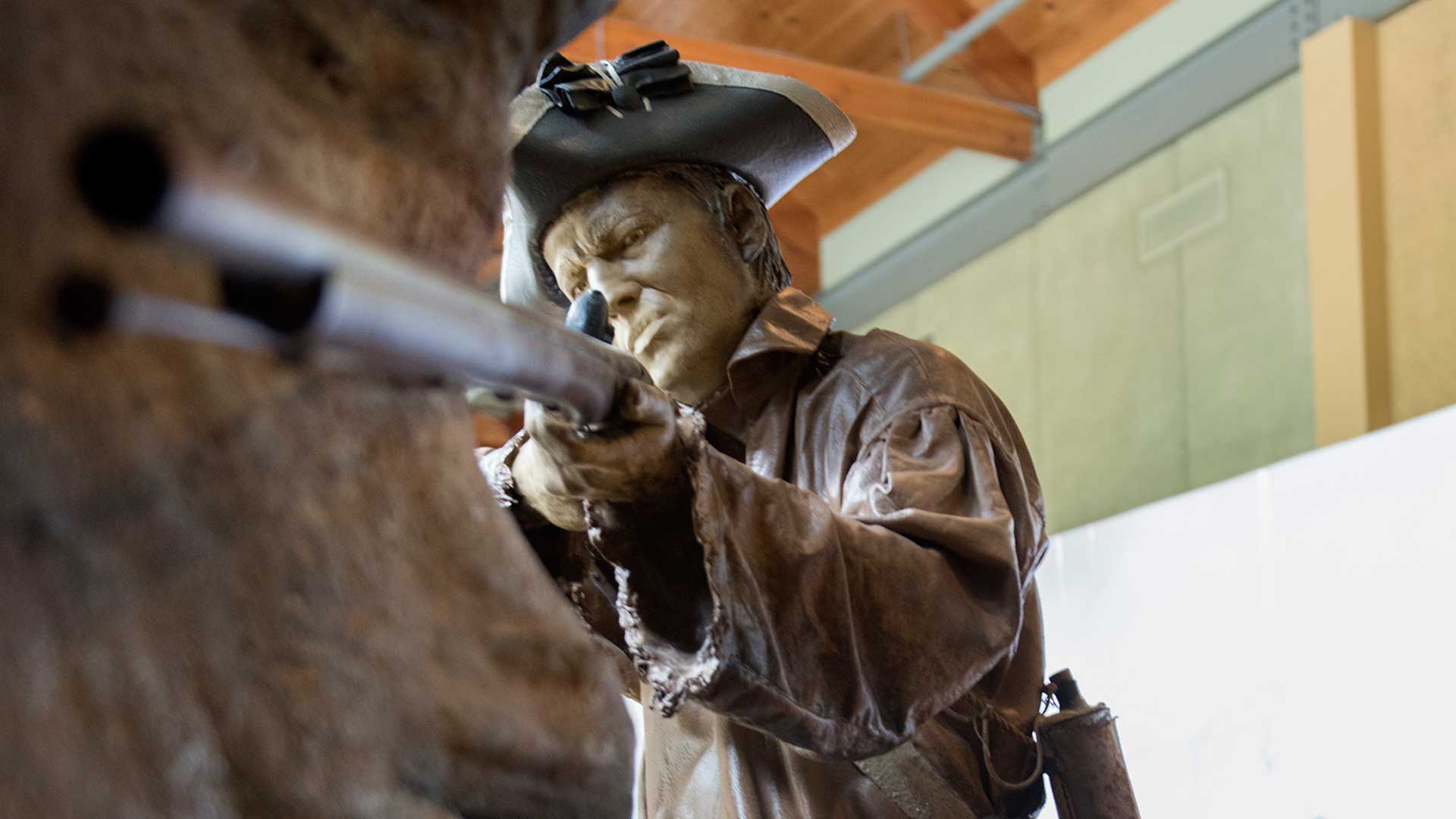 A model of a soldier crouches in the Fort Necessity National Battlefield Visitor Center in Farmington on June 22, 2016. (Haley Nelson/Post-Gazette)

Fort Necessity National Battlefield is one of the historic sites and monuments that the National Park Service began administering, in addition to natural parks, back in 1933. But history doesn’t just sit idle at these sites, like an artifact in a display case. As the park service and others continue to research and interpret it, history sometimes literally changes shape.

This park — just southeast of Pittsburgh along Route 40, the old National Road, in Fayette County — is important because it’s the site of the first battle of the French and Indian War. That became the global Seven Years’ War between the colonial powers of France and England, both of which were claiming the Ohio Valley — with their respective native allies. The Brits won that conflict, but the costs would include losing America in the Revolutionary War.

As the park’s chief of visitor services Brian Reedy told a crowd on a recent weekend featuring a reenactor encampment, “It’s a small fort, but it has a big story.”

That summer of 1754, George Washington himself led a British force from Virginia toward the confluence of the Allegheny and Monongahela rivers that we now know as the Point, where the French had taken over a small British fort and rebuilt it as Fort Duquesne.

An older postcard of Fort Necessity showing the fort reconstructed as a diamond rather than as a circle as archeaologists discovered was the real case.

Old postcard shows the way the reconstructed Fort Necessity used to look, until archaeologists determined that the wooden stockade actually was circular.

Visitors look at the stockade at Fort Necessity. In the background is the visitor’s center.

Artifacts at the Fort Necessity National Battlefield in Farmington on June 22, 2016. (Haley Nelson/Post-Gazette)

The Visitor Center at the Fort Necessity National Battlefield in Farmington on June 22, 2016. (Haley Nelson/Post-Gazette)

A representation of Fort Necessity and a model canon stand at the Fort Necessity National Battlefield in Farmington on June 22, 2016. (Haley Nelson/Post-Gazette)

In late May, Washington’s force arrived at what’s still a big grassy clearing, known as the Great Meadows, which they made their base camp. In a nearby glen, they surprised and skirmished with a French force of about 30, killing about 10 including an officer named Jumonville, then retreated to their camp. Expecting the French to attack, they quickly put up a storehouse inside a basic wooden stockade that they dubbed Fort Necessity.

It didn’t last long. On the morning of July 3, about 700 French troops and Indians attacked Washington’s 400, most of whom were protected only by dirt piles and ditches they’d dug outside the fort. After a day of fighting in relentless rain, Washington was forced to make what would be his only military surrender.

Site of the 1754 opening battle of the French and Indian War — between French forces and British led by George Washington — and one of just two NPS sites commemorating that war.

The park’s visitors center tells the story with a movie, artifacts and exhibits that include an epic diorama that drives home how muddy and bloody it was, especially for the British, who lost some 30 men. Another takeaway: George Washington was all of 22.

The French burned the fort to the ground. That ground itself remained somewhat hallowed and protected for decades, even though it went through many changes of private ownership (Washington owned it for 15 years) until the U.S. War Department took over in 1931.

Still, the onetime wetland had been drained and grazed, filled and farmed, and more development came with the National Road. Only faint ridges and depressions remained that seemed to show the outlines of the fort, which people believed was shaped like a diamond or a triangle. An archaeological investigation that unearthed some pieces of posts seemed to support the diamond shape, and so that’s how the park service reconstructed the fort in the early 1930s, and that’s how it was presented to the public.

Turns out, they were wrong.

In the 1950s, another dig was conducted, this time led by J.C. Harrington, who was investigating other historic sites. Those archaeologists found remains of stockade posts that proved the fort was circular, and quite small, which is how it was reconstructed (on its actual spot) for visitors today.

That makes Fort Necessity also an important site in the field of historical archaeology, of which Harrington is known as the father. In fact, Fort Necessity is etched on the back of the Harrington Medal, the Society for Historical Archaeology’s award recognizing scholastic contributions to the field.

“It’s a good argument for why we do what we do,” says Ben Ford, a Ph.D. in the Indiana University of Pennsylvania Department of Anthropology. This spring and summer, his IUP team did some more digging around the fort as part of a four-year project to restore the Great Meadows to look more like it did at the time of the battle.

The archaeologists’ main job is to ensure that the restoration doesn’t destroy a buried fortification or a trash pit or some other 1700s feature. So last year, they used ground-penetrating radar and other techniques — think, high-tech metal detecting — to identify geophysical abnormalities beneath the surface. Then this spring, they carefully dug 1-meter square or bigger holes, up to 2 feet deep, to see what they were.

Most of them were more modern features, such as a ceramic drainage line. One bit of stained soil could possibly be a log or corduroy road, and another area might be a bit of original breastworks.

While they didn’t seem to find anything earth-shattering, their work still was important, explains Mike Whitehead, the crew chief who led two graduate and three undergraduate students from IUP and one volunteer from California University of Pennsylvania. With Mr. Ford, he’s now digesting dirt and data and drawings and writing reports that could be useful for archaeologists of the future, whether next summer or a century from now.

The park service is more careful with reconstructions now. Several other high-tech research projects have been done there, including one that used pollen in the soil to plot the edge of the original forest border. Trees used to be much closer to the fort, which gave the French and their Indian allies cover and proved to be Washington’s undoing. This fall, the park service will plant trees to more properly frame this marshy meadow.

“It would have been nice if we had found a lot more 18th century objects and features, but our job was to make sure [the NPS] work doesn’t disturb anything,” Mr. Whitehead said from his lab. He’s amazed at how the park has morphed from how it looks in vintage photographs and postcards. “To see it come from there to what is is today to what it will be in a couple of years when those trees grow up, it’s pretty fantastic.”

“We’re reversing history, in a sense,” says Keith Newlin, assistant superintendent at the park, where he’s worked off and on since 1997. During that time, the park service has made other big changes, such as taking down its space-ship-ish 1966 visitors center and building its handsome new one, which opened in 2005, out of sight from the fort. As part of the restoration, they’ll remove the old parking lot, too, making it that much easier for visitors to imagine what the battlefield was like in colonial times.

Especially when they’re peering through the smoke when reenactors and staffers in period dress are firing black-powder muskets.

Eden Vantries, left, and Cheryl Frankum from the Indiana University of Pennsylvania Department of Anthropology excavate in the Fort Necessity National Battlefield in Farmington on June 22, 2016. (Haley Nelson/Post-Gazette)

Layers of soil reveal layers of history at the Indiana University of Pennsylvania Department of Anthropology’s excavation at the Fort Necessity Battlefield in Farmington on June 22, 2016. (Haley Nelson/Post-Gazette)

Archaeologists from the Indiana University of Pennsylvania Department of Archaeology from left: Samantha Jacobs, Ben Ford, and Eden VanTries excavate the Fort Necessity National Battlefield in front of a model of the old fort in Farmington on June 22, 2016. (Haley Nelson/Post-Gazette)

Also, starting in 2009, the park has been regularly reaching out to 11 native tribes who fought at Fort Necessity, inviting one, every other year, to come back to do living history and exhibitions. “This has been a key part of the way we tell the story now,” says management assistant MaryEllen Snyder. “We have lots more stories we can tell.”

On the occasion of the 262nd anniversary of the battle earlier this month, staff worked with the Elnu Abenaki Tribe of Southern Vermont (they fought with the French) to present a weekend of cultural heritage programs. They also developed an exhibition titled, “Parley & Protocol: Abenaki Diplomacy, Past & Present,” that Ms. Snyder says proved to be very popular and that will remain on view until mid-March.

Mr. Newlin says the park service is “hitting the mark” in preserving the battlefield and telling its tales, in a natural sense as well as a cultural one, to give visitors the most accurate and engaging experience. Even if that mark can be a moving target.

“You’re always striving for that insight — what really is this place?”