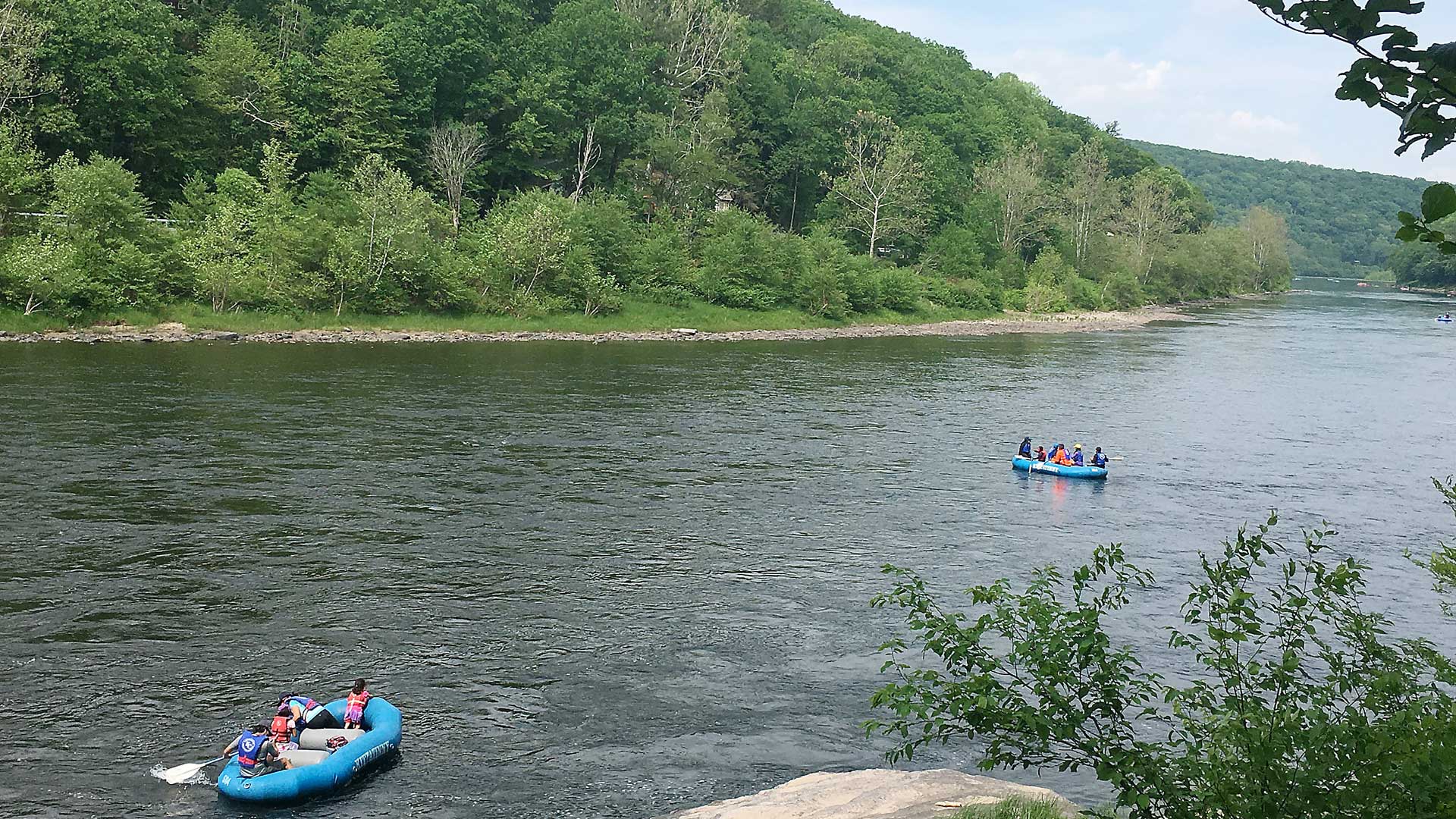 Rafters float down the Delaware River in Westfall Township, Pa. on May 29, 2016.

From any angle, the Delaware Water Gap is a monument to the forces of nature, so it is easy to overlook what humans have left in the dirt.

In his 1983 geologic history of the region, “In Suspect Terrain,” the writer John McPhee described approaching from the east and seeing the arresting gap on the horizon, “as sharply defined as a notch in a gunsight,” cleaving the otherwise unbroken crest of the Kittatinny ridge.

The Delaware River snakes through the gorge it carved on what is now the border between Pennsylvania and New Jersey and exposes patterns on the cliff walls that indicate how the ancient earth rose and folded.

The view captivated Hudson River School painters and, later, geologists, who recognized the Delaware Water Gap as a fragment of the Appalachians that helps explain the whole, Mr. McPhee wrote: “Tell me what made that scene and you will tell me what made the eastern United States.”

The recreation area also includes wooded tributaries to the Delaware, like Raymondskill Creek.

Rafters float down the Delaware River in Westfall Township, Pa. on May 29, 2016.

Archaeologists begin to excavate post molds identifying a structure that was part of an 800-year-old Native American fishing village on the New Jersey side of the Delaware Water Gap National Recreation Area. The park announced the discovery in 2004. (National Park Service, DEWA Archives)

The same scene encompasses a remarkable, representative chronicle of human life in the region, although its outline is less conspicuous. Remnants buried beneath the flood plains and the river’s terraces offer hints at the ways people lived and died during 13,000 years of almost continuous occupation.

For nearly as long as there have been humans in this corner of the continent, they have left a record here.

The 70,000-acre Delaware Water Gap National Recreation Area that covers parts of Monroe, Northampton, and Pike counties in Pennsylvania and Sussex and Warren counties in New Jersey contains what the park describes as “the most well-preserved concentration and intact diversity of known archaeological sites and artifacts in the northeastern United States.”

The park’s rich archaeological record is not obvious to most visitors, who numbered 3.7 million last year, making it the 23rd most visited National Park in the United States.

It is possible to picnic on a lawn near the river bank and not know there are traces of an 800-year-old fishing village in the soil below it and probably evidence of older habitations deeper still.

“The visitor tends to get out there and say, ‘Ah, nature,’ ” said R. Michael Stewart, an archaeologist with the New Jersey Historic Preservation Office and an emeritus anthropology professor at Temple University, who is writing a book about archaeological investigations in the Upper Delaware Valley. “The question that I would ask is, in an area where you have humans living on landscapes for 13,000 years, what exactly does ‘natural’ mean?”

The same thing that attracted the first people to the valley enticed everyone since. From the start of the Holocene to the arrival of European settlers, “you just get this repeated use of the river,” said Michael Owens, the cultural resources program manager for the Delaware Water Gap National Recreation Area.

The flow of water has been constant, but the waterway and landscape have changed.

People began to occupy these river banks not long after the glaciers retreated, when the river would have been a braided, muddy stream not the consolidated channel that today draws kayakers and rafters in droves.

But water drew animals, and animals meant food. Around 13,000 years ago, Paleoindians hunted with spears topped with fluted rock points, called Clovis points, which were found about 9 feet deep in the 1970s during excavations just outside the park boundaries at a site discovered by a retired electric company repairman with a passion for archaeology.

At the time, Paleoindians were widely believed to be predominantly big-game hunters, but seeds and fish bones recovered from the site revealed evidence of foraging and fishing.

“It helped to chip away at that specialized, big-game-hunting focus that had been attached to Paleoindian cultures for so long,” he said.

Other research in the Delaware Water Gap area has contributed crucial information about each subsequent period of human occupation, like how and where Native American cultures interacted, when they began to cultivate plants for food or ceremony, and ways they managed their environment.

Excavations of Native American burials in the Upper Delaware Valley began in the early 1900s and possibly earlier — a 1915 account of archaeology in the region already lamented the loss of artifacts to looting, Mr. Stewart said.

Half a century of study and collecting, some of it notoriously exploitative, helped later professional archaeologists identify valuable sites that were imperiled by a 1960s proposal to build the Tocks Island Dam six miles north of the water gap, which would have flooded an area 40 miles long and a mile wide.

Museum technician Lori Rohrer holds a piece of reassembled Native American pottery that was excavated near the Delaware Water Gap.

The dam project exemplifies a trend in the park’s cultural investigations. So much of what archaeologists know about the valley can be tied to waves of impending development that spurred researchers to dig up and rescue what they could.

Eventually, plans for the dam were scrapped after more than a decade of preparations and thousands of residents were permanently displaced. But it inspired a period of intense archaeological study that uncovered dozens of important sites and trained a generation of scientists.

The rush to salvage artifacts before they were flooded by the planned Tocks Island Dam sometimes prompted excavations that looked like mining, like this one at the Friedman Site, led by the New Jersey State Museum. The dam was never built. (National Park Service, DEWA Archives)

A longhouse pattern was found at the Miller Farm Site during an archaeological investigation by Seton Hall University in the Upper Delaware Valley. (National Park Service, DEWA Archives)

Universities received contracts to survey the New Jersey and Pennsylvania banks of the river and conduct what was called salvage archeology, “which was just going to the known locations and saving what you can,” explained Lori Rohrer, the recreational area’s museum technician.

Artifacts trapped at different depths of the layer cake of sediment that had been deposited over millennia helped distinguish periods of human presence and established better dating for distinctive pottery or projectile points. The findings, quickly published, provided an early framework for archaeological investigations throughout nearby states, Mr. Stewart said.

“It impacts the way other archeologists in the Middle Atlantic region are thinking about prehistory,” he said.

Today, intense archaeological research occurs much less frequently in the park and is usually prompted by some kind of planned or accidental damage — to take an account before a new toilet facility is installed or a power line crosses the park, or to recover artifacts brought to the surface by a farmer tilling a field that should not have been plowed.

About a decade ago, park archaeologists expected a survey to prepare for the building of a beach on the New Jersey side of the park to be unremarkable. Instead, the study exposed traces of a fishing camp from the late Woodland period, about 800 years ago, unlike anything that had been uncovered in the park before.

Below the topsoil, archaeologists found a clear pattern of circular stains in the dirt, indicating spots where long-decayed saplings had once been anchored to make conical huts or wind breaks and fish-drying racks.

The site, which contained few artifacts, speaks to the research value of the intangible. Among the remarkable traces was the outline of a grass fishing net, Ms. Rohrer said.

“You couldn’t excavate it because the minute you pick it up it’s gone,” she said.

Mr. Owens said it is easy to get caught up in the “material culture” aspects of archeology, but a pot, however intricately cross-hatched, is “just a way to get information.”

“What we are studying is humans and their behavior and their cultures,” he said. “That’s more important than a pot.”

In an ironic turn, environmental disruption in the park led to a new way to connect the region with the native people whose displaced ancestors made the valley’s history.

Money to offset damage caused by the expansion of interstate power lines allowed the park and its three associated federally recognized tribes to create a summer camp for teens from the Delaware Nation and Delaware Tribe of Indians, now in Oklahoma, and the Stockbridge-Munsee Community of Mohican Indians of Wisconsin. The camp will be held for the second time this summer.

For Mr. Owens, whose profession requires him to take a long view of human history, the campers’ interest in the area secures a future for a cultural past that is not quite contained by charred seeds and sifted soil.

“This gives it life,” he said.