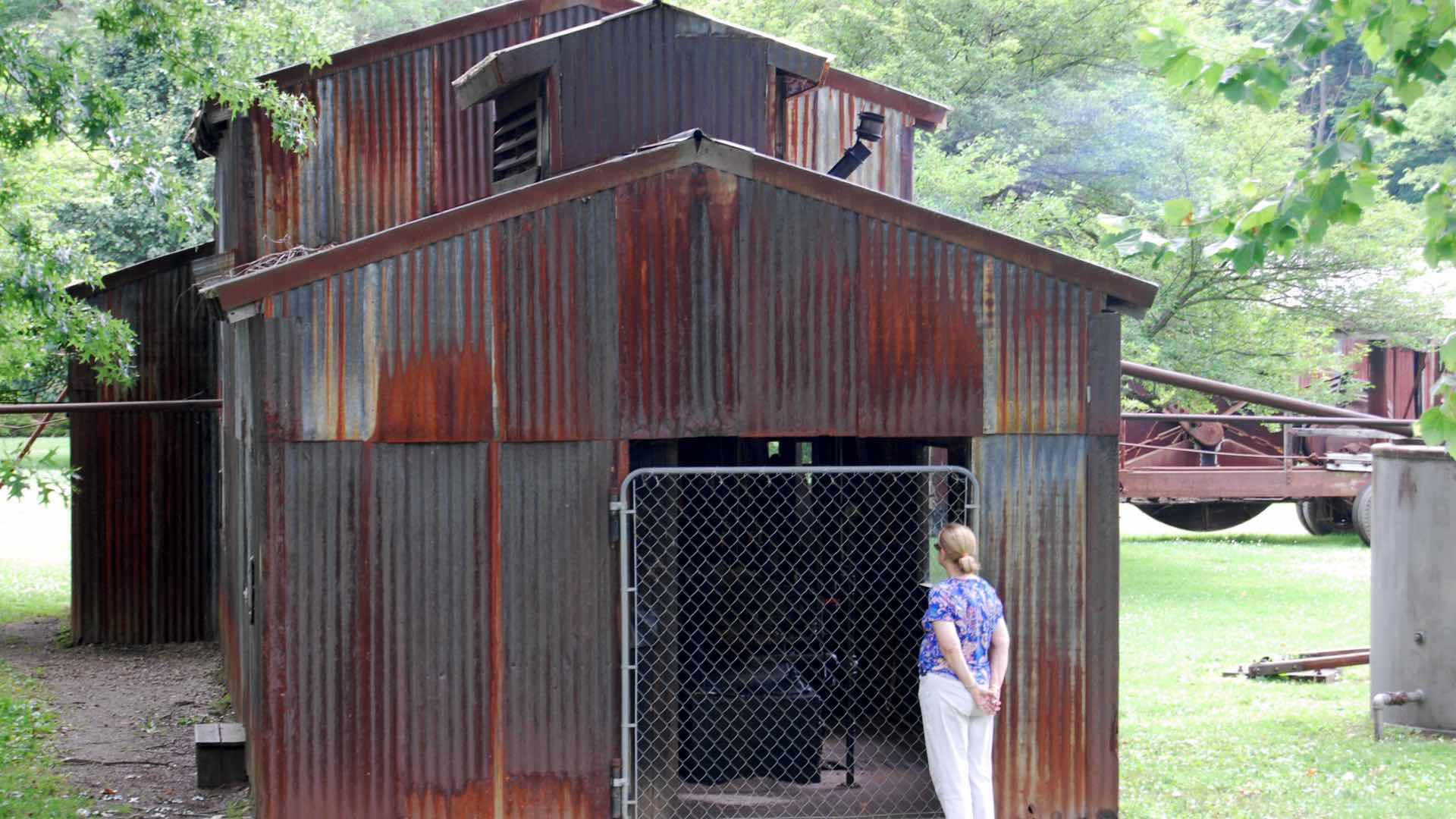 At the Drake Well Museum in Venango County, Marilyn Black, vice president of heritage development for the Oil Region Alliance, stands outside of the Central Power facility. The structure housed an engine that pumped oil from multiple wells at once. The barker on the exhaust pipe gives it a distinctive sound that allows the well operators to hear from a distance if their well was running properly. Each operator could customize the sound to track their particular wells.

When a dam burst on an already swollen Oil Creek in June 1892, residents in Oil City responded to rushing flood waters by fleeing to higher ground or upper stories of homes and businesses.

It’s what followed that turned a tragedy into a disaster.

The flood waters carried away storage tanks at an oil refinery containing oil byproducts — volatile components of the black gold that put Northwestern Pennsylvania on the map. The tanks spilled flammable liquid into the surging water and soon ignited, setting off other fires and explosions as the flood overran Oil Creek toward the Allegheny River.

There was panic as people tried to escape burning or drowning, the Pittsburg Press, a precursor to the Pittsburgh Post-Gazette, wrote on June 6, 1892, the day after the flood and fire.

Yet, “as soon as citizens began to realise the full extent of the terrible calamity that had fallen upon the city, they organized into relief squads to look after those who were caught in the fire and flood.”

More than 100 men, women and children were killed, in addition to the wounded and extensive damage done to Oil City and its sister petroleum town Titusville to the north.

Newspapers said the disaster could rival that of the infamous Johnstown flood of 1889.

If you decide to not opt for a tour, you can take a walk through the lower level for your choice of coin-operated music. Make sure to bring some change!

The Museum is at 1261 Liberty St., Franklin; debencemusicworld.com

The people were able to recover and rebuild. And the people of Pennsylvania’s oil region continued to pioneer energy development, often under the specter of fires, floods, industrial accidents, monopolies and financial busts. In the end, Pennsylvania’s energy trailblazing set the cues for places like Texas and Oklahoma.

Col. Edwin Drake drilled the first commercial oil well in 1859, an act that built boom towns, busted fortunes, and, initiated “a chain of events that literally changed the world,” according to the Oil Region Alliance, which administers the Oil Region National Heritage Area.

“This really was the birthplace of the oil industry,” said Marilyn Black, vice president of heritage development for the ORA. “This is where the innovation and trial and error happened that shaped the industry.”

Unlike other national parks, the Oil Region National Heritage Area is not strictly a park, nor is it administered by the National Park Service. Instead, the designation captures a whole region spanning Venango County and parts of Crawford County, and features a network of towns, museums, ghost towns and oil artifacts — as well as extensive hiking, biking and equestrian trails and water sports that can take you up close to where fortunes were made and lost on crude oil.

To begin your visit, you can start with a train ride.

Passengers can arrive at the Perry Street Station in Titusville at the Oil Creek and Titusville Railroad. The train, which has cars that date back 90 years, takes passengers on a three-hour round trip through Oil Creek State Park.

The Perry Street Station offers overnight lodging at the Caboose Motel, with 21 cars that have been converted into rooms. The train itself also is home to the last working rail post office, where passengers can send a postcard. The railroad features murder mysteries and guided tours of Petroleum Centre, a ghost town in the state park.

Petroleum Centre’s population spiked from 500 people to 3,000 in just a few short weeks, according to the railroad, and had a notorious reputation for vice without any formal government or law enforcement. Its peak was in the late 1860s, thriving on both the oil industry and entertainment for workers.

As described in Ida Tarbell’s “History of Standard Oil”:

“Here a whole street was given up to dance-houses and saloons, and those who must have a ‘spree’ were expected to go to Petroleum Centre to take it.”

Now, the state park has boardwalks outlining where the original town once stood, with photos showing the long-gone buildings and explaining their history.

Petroleum Centre and the rest of the park can be accessed by numerous hiking and biking trails, where outdoor enthusiasts can encounter the relics of boom towns and other shadows of the past. It’s not unusual to run across old rigs and pump jacks.

Pithole, another boom town that went bust and was not as wild as Petroleum Centre, is a must-see. It’s managed by the Drake Well Museum.

“Fire is the reason there aren’t many boom towns left,” Ms. Black said. “What wasn’t dismantled and taken to the next boom town often went up in flames, as most things were made out of wood.”

Not all oil towns had Petroleum Centre’s wild reputation.

In Tarbell’s book, she describes whiskey-sellers and women flocking to the oil region, where they built saloon shanties on flatboats that were towed from place to place. When they came to Rouseville, along the Oil Creek and present-day Route 8, they “tied up for trade and the next morning woke up from their brawl to find themselves twenty miles away, floating down the Allegheny River. Rouseville meant to be decent. She had cut them loose, and by such summary vigilance she kept herself decent.”

Among the stops on the train is the Drake Well Museum, the location of the first commercial oil well, drilled before the start of the Civil War.

The Drake Well Museum can be accessed by the train, hiking or bike trails, which are part of the larger Erie to Pittsburgh Trail.

One of the first things you’ll notice when you approach the well sites is a repetitive sound in the background.

As you get closer, it becomes overwhelming, like some animal panting and snorting over your shoulder. It’s called a barker. At the height of the oil boom, barkers were numerous — a constant cacophony in the background of every day life. Eventually, people got used to it and drillers altered the sound so they could know, from a distance, whether their well was still producing, Ms. Beates said.

“When people who were from the area left, they said they couldn’t sleep at night because there wasn’t a barker around,” Ms. Beates said.

Oil was first used by Native Americans — for much the same uses as today, said Ms. Beates. “We’re still using oil for lubrication, medicine, waterproofing. The only thing the Native Americans didn’t have is plastic. It touches every part of our lives. It’s almost a shame we’re still burning oil when there are so many other uses for it.”

Inside the Central Power facility at the Drake Well Museum in Venango County, a small vat helps keep the engine running smoothly.

A pump jack at the Drake Well Museum.

Inside the Central Power facility at the Drake Well Museum in Venango County. The power facility housed an engine that pumped oil from multiple wells at once. A barker on the exhaust pipe gives it a distinctive sound that allows the well operators to hear from a distance if their well was running properly. Each operator could customize the sound to track their particular wells.

A boiler is one of the vestiges of steam power on the oil field. The boiler was placed as far way as possible from where drillers hoped to hit gas.

Inside the Central Power facility at the Drake Well Museum in Venango County. The power facility housed an engine that pumped oil from multiple wells at once. A barker on the exhaust pipe gives it a distinctive sound that allows the well operators to hear from a distance if their well was running properly. Each operator could customize the sound to track their particular wells.

Maybe it’s only fitting that the woman who upended both the oil industry and journalism also came from the Oil Region.

Ida Tarbell’s home was in Titusville. Her book on Standard Oil was credited with breaking up John D. Rockerfeller’s monopoly on the industry, leading to antitrust lawsuits and congressional hearings. In 1911, the Supreme Court broke up the Standard Oil Company Trust.

Now, her family home, which was recently restored to its 1870s’ condition, is open for tours and for events.

Tarbell was a noted biographer of Abraham Lincoln. She wrote 23 books, which are for sale at her home.

The Titusville home of Ida Tarbell, a pioneering journalist who helped develop the field of investigative journalism. She is best known for writing “History of Standard Oil,” an expose on John D. Rockerfeller’s monopoly.

The train awaits at Oil Creek and Titusville Railroad’s Perry Street Station. A round trip takes about two and a half hours and takes you through scenic Oil Creek State Park. The train has the last functioning rail post office in the country, where you can send a postcard. Also at the Perry Street Station is the Caboose Motel, where guests can stay in vintage rail cars.

Signs for Pennsylvania oil companies at the Oil City at Venango Museum of Art, Science & Industry

You can buy your own Pennsylvania oil or piece of Marcellus Shale at the Drake Well Museum.

In a region that held so much wealth, it’s only natural that those dollars were displayed in fine homes and churches.

There are several self-guided tours highlighting the various styles of Victorian architecture and historic districts of Oil City, Titusville, Franklin and Emlenton.

Many wealthy oil families poured their money into local churches. St. John’s Episcopal Church in Franklin boasts an extensive collection of Tiffany windows, one of the few in the country. Tours are available.

The Oil Region had a cast of colorful characters.

One was John Washington Steele. Born in 1843, he and his sister were adopted by the McClintock family. He grew up along Oil Creek on the family farm, which was leased to oil interests. Those royalties added up and “became too tempting,” according to the Oil Region Alliance.

Steele left his wife, Eleanor Moffitt Steele, and their son and went on a two-year spree that took him to New York and Philadelphia. Newspapers dubbed him Coal Oil Johnny, partly due to his custom carriage — bright red and drawn by a pair of black stallions. Painted on the carriage doors were black oil derricks sprouting dollar signs.

“He was known to buy out all the seats in a theater and then throw open the doors to invite the public as his guest,” said Ms. Black.

After squandering the money, he returned home. He eventually moved out west and died in 1921. The McClintock-Steele-Waitz house is now owned by the Oil Region Alliance, an agency that promotes economic development and tourism.